After this week’s vehicular terrorist attack in Berlin, where a truck driver was murdered by the terrorist who drove his rig into a crowded Christmas market, there is growing concern about terrorists using similar tactics in the U.S. While some trucking companies have already been preparing their drivers with preventative training against potential threats including hijackings, companies are also being warned that they need to jack up security on the cyber end as well. 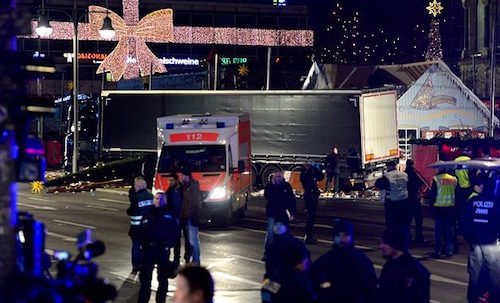 Justin Cox is the Training Manager at the Missouri based company, Wil-Trans, and he says there are so many potential threats on the road that it’s absolutely necessary for companies to train their drivers to be prepared anything and everything. "Day one we're talking about it in the introduction about equipment security, about not leaving your equipment unattended for any length of time unsecured, and truck stop parking lots," he explains. Kem Emerizan is a CDL Instructor for the company and as a female who has worked in the industry for 15 years, she is also well aware of all the dangers that drivers face on the job. "There's just so many variables out here that you have to be prepared to take charge and handle it right away." But she also says that really, the best line of defense for any scenario is to simply stay alert and be aware of your surroundings at all times so that you’re less likely to be a target. "Just be smart about it. Don't put yourself in a bad situation. Don't become that target because you don't give them an opening to be a target," says Emerizan.

While the wave of vehicular terror attacks still hasn’t hit the U.S. and terrorist attacks aren’t exactly common in the Midwest, Cox says their company still treats it as a very real threat and they train their drivers to be ready. "It's a very real threat and we prepare everyone the same way day one. We always treat it as it's always going to happen or it really could happen every single time," he says. The company says they also equip their trucks with safety equipment that helps with anti-theft deterrence such as a kill switch and an alarm key code. "Everything is time stamped, everything's GPS within five feet, we can ping a vehicle. We know where exactly you're going to secure your equipment. We want to know where that truck and trailer is going to be and how long it's going to be there."

However, last August after Bastille Day vehicular terrorist attack in Nice, France, a team of hackers/researchers alerted the U.S. trucking industry to take their cyber security a lot more seriously if they want to prevent similar attacks. At the USENIX Workshop on Offensive Technologies in Austin, TX, they demonstrated how easy it was to use a laptop to hack into the computerized vehicle systems to change gauge settings, brake operations and acceleration controls. “These companies need to start looking at computer security as a potential safety issue like they look at making sure air bags work properly,” one of the researchers said at the conference. “It all needs to go into the same level of priority.” They also said that even by taking simple measures such as creating high-security passwords for computer systems, trucking companies can make themselves a lot less vulnerable to hackers.

Brian Gosvener
No way Look at all the drivers we have from abroad already But who can blame them when my generation is too pussy to leave home for more then a day
Dec 23, 2016 7:00pm

Robert Falcone
There is a truck driving school on the street i work on. They use this street to train the students. I have noticed that the majority, by far, of the students being taught are of middle eastern descent.
Dec 23, 2016 2:37pm

Ross Tennison
Nope, not at all. The large carriers are more involved in socialist ideas and California and other states are issuing licenses, CDL and others, to people who cannot and will not speak our language.
Dec 23, 2016 7:15am

Cory Hunborg
Which is absolutely retarded and illegal but thanks to Obama it's overlooked
Dec 23, 2016 7:12pm

Jim Poedtke
So true , in the US the universal sign for a fire department is a yellow diamond with a truck with ladder on top , had a Russian driver argue with me that that was a truck route sign , even though ten feet in front of us was a sign that said "No Trucking , 6 ton limit"
Dec 25, 2016 7:55am

John MD Kessner
The MOTOR CARRIERS are just putting anyone behind the wheel. It's all about "PROFITS" There no loyalty in this business
Dec 23, 2016 4:05pm

Larry Underdal
What's wrong with you people? All terrorist have to do is drive a school bus.Hit another one head on all these two lane road's.100 kid's dead.There goes the media.Keep running your mouths.
Dec 24, 2016 2:48pm

Jim Poedtke
Not much you can do ,without being politically incorrect , all races drive trucks , we already go through background checks and finger printing for H endorsement , suppose that could be done for all but what's the point , most of these idiots are suicidal for there cause and have no record, besides theres already a shortage of drivers ,more regulations will bring more shortage until the pay goes up , I just paided $120 for DL renewal , for $1.00 /hr less I can drive forklift with none if these head aches or responsibilities
Dec 25, 2016 7:51am

Mike Mitchell
Yes, most of this nonsense about terrorism is completely made up in the media. You guys are doing fine, and always will be. Truckers are the backbone of our society, and are doing a great job of keeping this place up and running without being distracted by made up nonsense.
Dec 24, 2016 11:07am

Ritch Schut
considering the amount of CDL holders here in the USA that lack the ability to speak english......and yet this question gets asked??? get real
Dec 25, 2016 6:33am

Tish Kevin Young
Is this a joke most the drivers are hadgis I freak out when I see one in a truck stop wearing a backpack I wanna start shooting then ya know just in case
Dec 22, 2016 2:56pm

Mike Mitchell
Besides, terrorists are easy to identify. They always leave their passports in their cabs, and clean up all the blood before recording their attacks.
Dec 24, 2016 11:09am

John Sparks
A terrorist wouldn't even need to hijack a truck here...just hang out at the fuel island and wait for someone to leave his truck running & unlocked while he goes inside. That being said,there are foreign nationals getting CDLs every day whose backgrounds are unknown.It's just a matter of time before it happens here.
Dec 24, 2016 5:56pm

Kevin Richardson
No because we're not allowed to carry firearms on us. Next most of your lot's and warehouses are non secured so wide open for any terrorism.
Dec 22, 2016 1:48pm

Bo Venable
As long as your company don't have a policy against it and you have a concealed carry permit just run states that recognize your permit and you can carry
Dec 23, 2016 6:45am

Lisa Gibson
No, not with so many companies coming from Canada, with drivers from everywhere. Or even Mexico.
Dec 23, 2016 11:11am

Sheldon Owens
Yes ther doing all they can to make sure that some terrorist are driving for them
Dec 23, 2016 12:44pm

Bennyd Babb
Really this is overly peranoid scytsphrinia never believe what you see and hear on TV.
Dec 23, 2016 8:01am

Sheldon Owens
They let them come overe here and go to there flight schools so they can highjack plains use them agenst us and why not teach them to drive a truck so they can plot there next move
Dec 24, 2016 4:59am

Bryan Futch
Welcome to America. Please have a CDL and ungoverned Volvo. What do you expect will happen??
Dec 25, 2016 9:50am

Sam Wills
I guess/hope so considering they don't happen too much.........and i certainly dont wanna see us over do the prevention of it the way we've used terrorism (and the drug war) to infiltrate racism at alot of local levels.........you're still much more likely to die in a truck crash than you are some terrorist using it as a weapon
Dec 25, 2016 6:18am

William Seifert
HAHAHAHA...the indrustry wont do anything until there is an incident at a shipper....
Dec 23, 2016 6:15am

Dave Langworthy
Fuck no.Truckers cant even carry a gun.Its bs.We should be able to protect ourselves.
Dec 23, 2016 10:17pm

Nomadi Soulsta
Not really because any dumbass or terrorist can go to a bullshit school and get license
Dec 23, 2016 9:24am

Patrick Lucas
Get your permit carry your weapon. O i forgot drivers today are to scared of they company they work for to stand up and say it my right to CARRY
Dec 25, 2016 9:43am

Michael Badenbach
I hope someone poured out their piss cup right there
Dec 24, 2016 1:40pm

Gail Regula
Very few of them pray. The ones who do pray like that are seen as over zealous religious kooks by the rest of the Muslims. This tells you alot about the guy in the picture.
Dec 24, 2016 5:07pm

Wendy Coulter
I know people excluded from owning guns that have hazmat so what does hazmat have to do with it
Dec 23, 2016 9:38am