More details have emerged about the tragic fiery crash that killed two truck drivers in Oregon on Saturday. 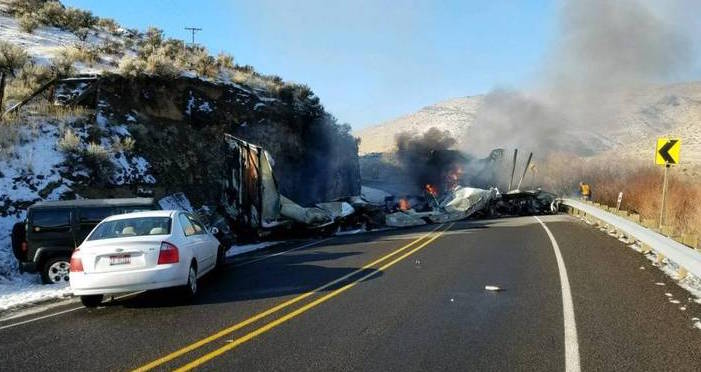 The incident occurred shortly after 9 am Saturday morning on U.S. Highway 20 at milepost 216 in Malheur County, OR. According to Oregon State Police, a white 2016 Kenworth truck was heading east when it veered into the oncoming lane and crashed head-on with a westbound 2015 Freightliner rig. The force of the collision caused both vehicles to burst into flames and both truck drivers were pronounced dead at the scene.

On Sunday police released the identity of the Kenworth driver as 37-year-old Brian Brunscher of Springfield and the Freightliner driver as 55-year-old James Shorten of Portland. Two passenger vehicles were also involved in the incident. A green Jeep Wrangler driven by Leonard Herr, 60, and a white Kia Spectra driven by Albert Nasby, 52. Both vehicles were following behind the westbound rig when the collision occurred causing the Jeep to crash into the rear trailer and then the Kia to crash into the rear of the Jeep. Airbags were deployed in each vehicle and both drivers managed to survive the incident without injuries.

For more than 12 hours a portion of Highway 20 was shut down between mileposts 189 and 223 as crews worked to put out the fire, remove the wreckage and clear approximately 400 gallons of diesel fuel, which had spilled onto the road. Investigators have since determined that icy road conditions and speed were two major factors contributing to the crash.

Similar conditions were also causing several vehicles including semi-trucks to crash along I-84 eastbound and forced road closures from Exit 302 in Baker City to milepost 351 in the Ontario area.