The recent Texas floods may have brought on treacherous road conditions but it also proved to be another shining example of how bad situations can bring out the best in people and their will to save a truck driver’s life. (Watch the rescue caught on video.) 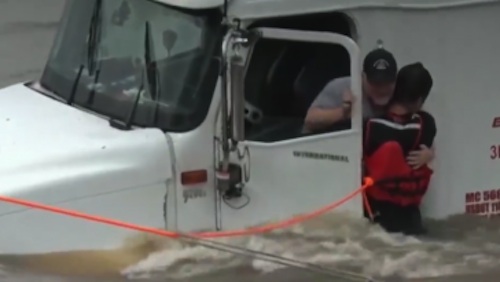 Daniel Sieczkarski and a group of good Samaritans are being hailed highway heroes after saving truck driver, Ron Bumpas, who was trapped in the high, rushing floodwater in Brookshire, Texas. On Monday, Sieczkarski had been driving through Brookshire from Laredo on his way to North Carolina and wasn’t even aware of the dangerous flood conditions until he came up Interstate 35 to I-10, and saw a sight he will never forget. A tractor-trailer submerged in water in the middle of the road. "As I was getting closer to that driver, I had noticed that the road was completely flooded," he said. Sieczkarski immediately pulled over and walked up to the bridge where other motorists had already gathered and were trying to communicate with the driver. Someone was calling 9-1-1, someone else was holding a life vest and the truck driver had an air hose, but the rescue operation wasn’t coming together. "The Weather Channel crew pulled over and I asked them if they had any rope so we could do a rescue and pull him out," Sieczkarski said.

They managed to get the life vest over to Bumpas but he wasn't able to use it. At that point Sieczkarski knew the man was in serious trouble and time wasn’t on their side. "I basically told everybody, 'I'm going in.' That's when I took my socks and shoes off, put the life vest on, " Sieczkarski explained. He jumped into the water and swam over to the truck driver who then revealed that he didn’t know how to swim. A few moments later Sieczkarski said he felt the truck move and saw the water was rising fast. "It's now or never. We need to go," Sieczkarski told Bumpas. He yelled over to the group gathered at the embankment to make sure they were ready for them and then pulled the driver out of the truck and held on to him as they hit the water. "Me and the driver basically plunged into the water, went under the water for five to seven seconds. It felt like an eternity. I lifted myself up to keep his head above water," Sieczkarski said.

Using the rope attached to the life vest, the people on the bank worked fast to pull them in. But right as they neared the edge, Bumpas let go and Sieczkarski yelled for someone to grab him. The people acted quickly and both men were dragged to safety before any first responders arrived at the scene. They both survived the ordeal without injury and Sieczkarski credits everyone who worked together and helped with the rescue. He also said that he wouldn’t hesitate to to do the same thing again because he knows what it's like to lose a loved one. The single father of three lost his wife only three years ago and says he was thinking of Bumpas' family when he made the decision to jump into the water.

Joseph Sulham
Looks like his balls were bigger than his flotation device...good going Gilligan..the skipper is going to be pissed..
Apr 21, 2016 6:51pm

Erick Painter
I saw on the news how they were pushing through. I have to laugh. Somtimes you should just stop and think is it that important?
Apr 21, 2016 7:08am

Glenda West
Blessings on the rescue party. Thank God there is still good people to help others.
Apr 21, 2016 8:48pm

Michael Myles
Will somebody slap that Swift reject for going in that deep water to start with, what a big Rigger moron.
Apr 22, 2016 1:28pm

Michael R. Beals
So many super truckers commenting like you were there for the whole thing. Typical of you though. How do you know that water didn't rise while he was sitting their.... Facebook rambos
Apr 22, 2016 8:11pm

Winston Tucker
He knew there was flooding, he knew the road was at least partly flooded already and it was still raining. It's called common sense. Don't cross flooded roads even if it looks ok.
Apr 23, 2016 1:42pm

Software Scripts
Absolutely love anything like this
Apr 22, 2016 7:00am