It often seems there is a rivalry between truck drivers and motorists, but this week proved yet again that it isn't always the case when a fellow human life is at stake. On Wednesday, a three-vehicle crash in St. Charles County, MO left a truck driver's life hanging over a bridge until three motorists banned together and pulled him to safety. 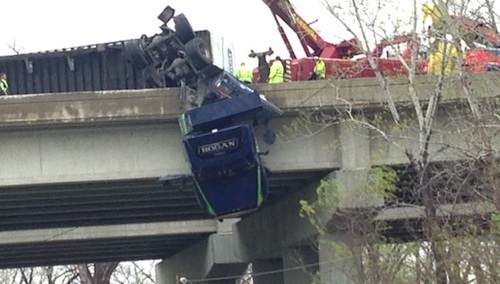 The accident occurred on Highway 370 just west of the Discovery Bridge at about 12:20 pm Wednesday. Truck driver, Michael R. Coleman, was simply doing his job and driving eastbound in a Hogan Company tractor-trailer carrying liquid soap. According to police, a motorist driving a Pontiac GC was also heading east and attempted to change lanes when the rain-slicked road caused the driver to lose control. The Pontiac swerved and hit a Ford Fusion just as Coleman’s tractor-trailer was approaching from behind. The truck driver's immediate reaction was to brake hard and avoid hitting the two vehicles, but the sudden action instead caused him to swerve and strike both cars. The motion then caused the big rig to overturn onto its driver side and then slide off the right lane, leaving the cab dangling over the highway bridge overpass. 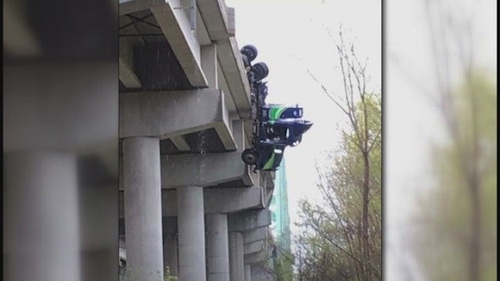 Nick Hargis of Troy, MO saw everything happen in front of him and his immediate reaction was to pull over and save the truck driver. Two other motorists had the same instinct and the three men gathered at the crash site first calling to the truck driver to make sure he was all right. "He wasn't hurt. I told him just to sit there," Hargis says. They devised a plan to pull Coleman up from the wreckage using tow straps that Hargis happened to have in his truck. Coleman began the daredevil attempt of climbing out of his dangling cab and onto the top. He then fastened one of the tow straps around his chest and the three men pulled him to safety.

"When he got up to the ground, he was like, 'Thank God I'm alive, thank you for helping, me, I thought I was going to die.’ We stayed there until the firefighters and everybody got there," Hargis continues. Miraculously, the truck driver escaped the incident unharmed and the two motorists in the initial accident (Maurice A. Hines, 34, of St. Louis, and Delbert R. Traub, 62, of Eldridge, Iowa) were taken to a nearby hospital with minor injuries. The eastbound lanes of Highway 370 were shut down for about three hours as rescue crews worked to upright the tractor-trailer and pull the cab up from the edge of the bridge.The Missouri Highway Patrol says none of the soap leaked but a small amount of diesel fuel had leaked from the truck's fuel tank.

Kirk Righetti
This article was out 4 days ago...didn't mention the driver being helped. Insulting someone is not necessary. ..thank you
Apr 08, 2016 7:53pm

Kirk Righetti
True bout the freak part but last article was clear bout that the driver climbed himself to safety...it was even title of article
Apr 10, 2016 8:03pm

Trucking Unlimited
the driver climbed out on top of the cab. the motorists threw him a tow strap and pulled him up.
Apr 11, 2016 2:17pm

Kirk Righetti
Article must have been updated, the first one must not have been complete...seriously people wow
Apr 12, 2016 12:04am

Bob Reital
They have Elogs. I used to drive the same route he drives for Hogan. KCKs to Edwardsville, Ill They call it the P&G run. Thank God he is safe.
Apr 09, 2016 9:46pm

James R Maxwell
I talked to one of their drivers and he had a car on one side of him and then another car cut him off and over he went.
Apr 10, 2016 9:11am

Shirley Dale High
Read the article. Whoever you talked to doesn't know what their talking about.
Apr 10, 2016 10:33am