Just weeks after a truck driver was murdered at a Sumner, WA truck stop, another truck driver was shot to death in Polk County, N.C. last Thursday and now three “persons of interest” are in custody. They were arrested In Gainesville, Florida on charges unrelated to the homicide, but investigators believe they are connected to the case.

On Thursday, March 31 at around 6 a.m. the driver of a tractor-trailer pulled up behind a box truck parked along the on ramp from Highway 108 to U.S. 74 West. The box truck suddenly rolled backwards and hit the tractor-trailer, so the big rig driver called police to simply report the accident. But when officers arrived on the scene, they found 51-year-old Destry Horne of Lilesville, N.C. dead in the cab. According to Det. Sgt. Randall Hodge of the Polk County Sheriff's Office, it was quickly determined he had been shot by a handgun and it appeared to be a homicide rather than a suicide. Hodge said they immediately interviewed the tractor-trailer driver who explained he had been getting ready for his day on the job, when the box truck just rolled into him. Investigators said there were no signs indicating the tractor-trailer driver was involved in Horne’s death. 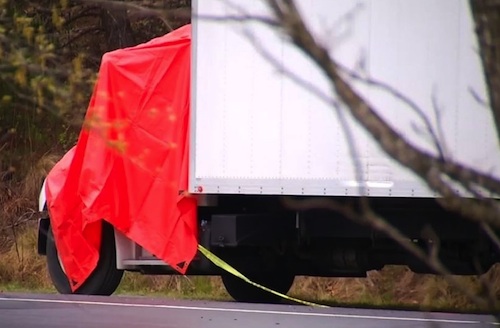 Polk County investigators wasted no time trying to piece together the crime and by April 1, they released surveillance photos from a nearby gas station of two men and two women who were seen about 500 yards away from where Horne was found in his truck. They were also driving a stolen car, which also appeared on the surveillance footage and was involved in a police chase the next day. Apparently, a Spartanburg County deputy spotted one of the men at a restaurant and when he tried to stop the Ford Mustang the suspect was driving, a high-speed chase ensued. According to the police, the chase started on Highway 9 and continued on Interstate 85 reaching speeds of over 130 mph. The feeing suspect caused several accidents attempting to bypass heavy traffic and driving in the emergency lane. However, the Mustang managed to escape and was later found abandoned on a nearby road. The driver was later identified through fingerprints in the car - as Quintae Edwards. 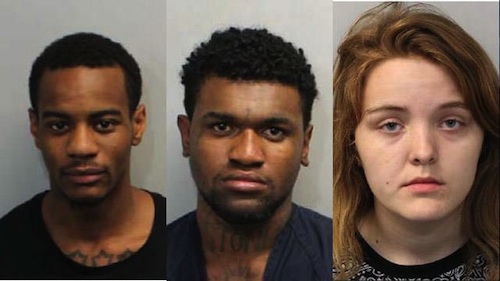 Then on Sunday night, three people were arrested in Gainesville, FL for a home invasion, robbery and kidnapping attempt - using a handgun. They turned out to be Edwards and two others from the gas station surveillance video - Kwame Fernanders and Kayla Black. Polk County investigators travelled to Florida to question them about Horne’s murder and are continuing to seek the fourth person of interest.

Authorities urge anyone who saw anything or may have any information related to the murder to contact the Polk County Sheriff's Office at (828) 894-3001.

Tyrone Woods
Sounds more like they shot someone trying to steal a six wheeler and the truck driver could of been next.
Apr 07, 2016 4:17am

Sheila Johnson Crowley
Never pick up a hitch hiker and I hope you can carry for your own safety.
Apr 06, 2016 8:41pm

Nicholas Tomcheck
It's a matter of time that a lot of drivers are going to be robbed and murdered. These foreign people from other countries will do what that may to survive in our now third world country.
Apr 07, 2016 3:51pm

John Everline
Put those three to sleep asap. No need to wait. We should not have to worry about this bullshit while trying to make a living.
Apr 06, 2016 8:20pm

Joshua D Cunningham
And this is exactly why I carry regardless of who likes it and doesn't like it.. By law I have a right to protect myself, my home, and my business. Just so happens two of the three are the same..
Apr 08, 2016 9:19pm

Scott Dunham
I carried a weapon every day for 6 years in the military and I didn't miss a beat after I got out in 88 and jumped in these trucks. Hell I wouldn't be about to sleep at night without it after 35 years.
Apr 08, 2016 8:37am

Jake Moore
You can carry. I have gone through multiple scales with mine. In order to conceal you must have a ccw that works in the state your traveling.
Apr 08, 2016 4:40pm

Machael Jamie Emerson
No it's legal as long as you know your laws for each star you drive in and have a weapon permit
Apr 08, 2016 1:53pm

Machael Jamie Emerson
If the state dose not allow it then you put it away in a locked fun case until you are in a state that allows it with your permit.
Apr 09, 2016 10:38pm

Rebecca David
Seriously! I really hope that is a joke. The day we demand our drivers to pull over after X amount of hours then charge them to do so is BS....I so wish people would realize with out those truckers our shelves would be empty... Plain and simple. I challenge everyone to look around them no matter where they are and find something that did NOT touch a truck. Better hope all those truckers never say enough is enough and form a strike.... That is what it will take for people to realize how important drivers are. Especially the small amount of Real truck drivers that are left.
Apr 07, 2016 4:08am

Rebecca David
Robert Camp that is whacked. I get all truckers are not decent but there is more good then bad. There is some good ones left...
Apr 07, 2016 5:02am

Robert Camp
I know and some of the prices they charge you would think it would be safe to stay there but the free truckstops are 100 times better
Apr 07, 2016 5:23am

Heston Rounkles
It was a gas station with a few truck parking spots, till he got the land next door practically free for putting in a cng refill island. Now he has a huge lot and charges $12 per 10hrs plus tax because Seattle won't allow more truck stops to be built he gets away with it. And possibility of ta losing truck parking could get worse. Seattle you park on the street, in back of a building, or drive 30 miles to one of 3 truck stops on 3 sides and hope they have parking. Like los Angeles. They charge because they have no competition. 16 years ago most truck stops charged for parking before flying j and loves started competing and most got rid of paid parking. That's why most ta and petros have those booths at the entrance but are free to park
Apr 07, 2016 11:06am

Heston Rounkles
It's 's, but also nice late at night at places that always fill. Lodi,ca. Indianapolis. Then it's nice when you don't have time to drive somewhere else. Especially if your company reimburses it
Apr 07, 2016 7:55pm

Beth Howells
Only reason your hearing more is social media this isnt new
Apr 07, 2016 7:16am

Heather Strickland
He wouldn't know a truck driver walking down the street...he is a Obama/Clinton supporter!!
Apr 08, 2016 6:44am