Another criminal is at large after killing a truck driver and now the non-profit group, truckersfinalmile.org is stepping in and offering a $2,500 reward for information leading to the arrest and conviction of the person(s) responsible for this latest tragic incident. 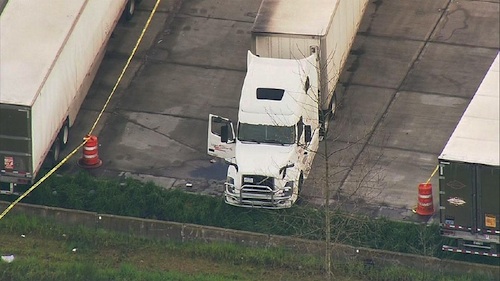 On the morning of March 8th,  52-year-old truck driver, Piotr Pietrzykowski, was found dead in the cab of his tractor-trailer by an employee at the Mustard Seed Market Deli & Travel Plaza, 2320 136th Ave. E. in Sumner, Washington. Sumner police arrived at the scene to find the truck driver already deceased. "No response at the door,” said Sumner deputy police chief Jeff Engel. “Knocked further. Looked inside and saw a male who needed some assistance and checked on him further and he appeared to be deceased."  Police knew they had to work fast with the difficult job of investigating a homicide in a location where people are constantly coming and going, making potential witnesses hard to come to by. They immediately started asking fellow drivers who had been resting at the truck stop. "A cop woke me up and said 'did you hear anything?' 'no,'" said truck driver Paul Sisul who was sleeping just a few feet away in his cab. 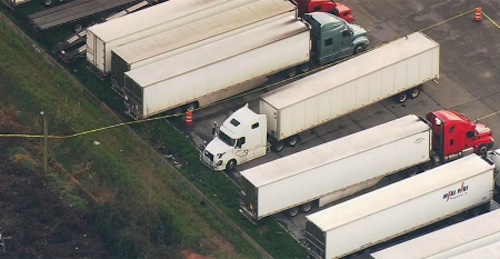 Investigators also brought a K9 unit to the scene, hoping to catch the scent of the killer. Early on they ruled out the possibility of it being a robbery gone bad or a random attack and said they have reason to believe the truck driver had gotten in an argument with someone. Possibly even a person that had been riding with him. While the trucking company, Top Line Express, confirmed there was no second driver scheduled with Pietrzykowski, it is common for drivers take someone along on the road. But Sisul said he doubts it was another truck driver. "You put two guys in a truck for long enough they fight usually. But I've never heard of anybody killing the other guy. If that's what even happened," he said.

On Saturday, volunteers from Pierce County Search and Rescue spent eight hours searching the truck stop plaza area for possible evidence but unfortunately they didn’t find much. On Monday, the organization truckersfinalmile.org stepped up the search and announced a $2,500 reward, hoping it will convince someone to come forward with information. The organization is also raising money to get Pietrzykowski’s body home to Elgin, Illinois, where he lived with his wife and 8-year-old son.

Donations can be made at www.truckersfinalmile.org

Anyone with information about the homicide is asked to call the Sumner Police Department’s tip line at 253-299-5678.

Rhonda Chapman
Trucker's Final Mile is an excellent charity. Bless them and donate when you can. R.I.P. Driver.
Mar 14, 2016 9:12pm

Gerald Gross
Well Eric Rick Zieba u tell me where it is because ur 2nd amendment allows you bear arms ur truck is considered ur domicile which means you have the right to protect .if ppl would just learn ur rights & laws before you come on here & show how big of an ass u r
Mar 16, 2016 5:56am

James Canady
I have conceal carry permit and had LONG talk with Arkansas state trooper..you have the same right as anyone else. ..
Mar 16, 2016 6:08am

Eric Rick Zieba
Gerald, #1st off, if I'm not mistaken, its against federal d.o.t. rules! #2, go ahead and take/get caught with a gun in any vehicle in that shit hole Illinois and they will take it away from you.I know someone it happened to.,#3,I didn't call you or anyone else an ass? Why show yourself as one; because, you did!
Mar 16, 2016 8:14am

Dave Shepard
There is no rule or regulations saying you can't carry a gun in your truck. It depends on where your permit is from and what states except it. My permit if from Florida which is excepted by 38 other states. The only things is you can't it can't be in the cab area. It has to be in tge bunk an unloaded. Not within arms reach while driving down the highway. Now the other problem is whether or not your company allows you to have it in your truck
Mar 16, 2016 10:32am

Gerald Gross
Eric Rick Zieba I know facts before I comment apparently u don't so all I was saying if you don't know what ur talking about don't get on here & like u do cause it makes u look like an ass good day
Mar 16, 2016 12:19pm

JW LoLyfe Shaker
Show the proof or ur fact!! I've been pulled over with a pistol and guess what #1 I don't have a CCW #2 I let him know of it as soon as he came up to my truck #3 he asked for it so I cleared the chamber and took out the clip #4 he checked the S/N cleared the gun gave it back and finished the traffic stop. #5 before he left he flat out told me I have every right to protect myself by any means.
Mar 16, 2016 1:01pm

Mike Durrett
Solve the debate. Every single person that says it's a law, post the link to said law every time you feel the need to be wrong.
Mar 16, 2016 4:12pm

Brian Meadows
Gun laws are laws per state. Carry is different than transportation of. Just because the visiting state doesn't honor your permit doesn't automatically make it illegal. There is over 100 laws that pertain to gun laws for travelers. Vehicle type has never been a determining factor. The is federal law on transportation for travelers. And in that it leaves it up to the state.
Mar 16, 2016 4:31pm

Thomas J Badillo
Can a CDL truck driver legally carry a gun in the truck? This is a very HOT topic! In my previous article, “CDL Truck Drivers Carrying Guns,” much controversy was created because nothing could be found anywhere showing any Federal Law stating that it was illegal to carry. I have pointed out that there is NO Federal Law saying that it is illegal, only city, county and state laws that make it illegal to do so, as well as policies set forth by the motor carrier. I have found the actual Federal Law revealing the insight on this subject, listed below: Title 18 Setcion 926(a). The peacable journey law. TITLE 18–CRIMES AND CRIMINAL PROCEDURE PART I–CRIMES CHAPTER 44–FIREARMS Sec. 926A. Interstate transportation of firearms Notwithstanding any other provision of any law or any rule or regulation of a State or any political subdivision thereof, any person who is not otherwise prohibited by this chapter from transporting, shipping, or receiving a firearm shall be entitled to transport a firearm for any lawful purpose from any place where he may lawfully possess and carry such firearm to any other place where he may lawfully possess and carry such firearm if, during such transportation the firearm is unloaded, and neither the firearm nor any ammunition being transported is readily accessible or is directly accessible from the passenger compartment of such transporting vehicle: Provided, That in the case of a vehicle without a compartment separate from the driver’s compartment the firearm or ammunition shall be contained in a locked container other than the glove compartment or console. OK…now that we have the Federal Law on this matter, what does it mean? I would say that you could give this to 50 attorneys, and all 50 would interpret it differently! I believe what it is saying, is what I originally wrote in my previous articles….a CDL driver may carry a gun in the truck with him or her, PROVIDING that it does not violate any other STATE law, in which the driver will be passing through. Thus my point again…city, county and state laws may be the prevention for CDL truck drivers to carry guns… Unfortunately the weapon is not going to do you much good if you're asleep in the sleeper and someone breaks in to kill you and your weapon is out of reach and unloaded......
Mar 16, 2016 4:50pm

Ray Reed
Well I'd rather be judged by 12 than carried by 6. I have my concealed carry and I will carry it in the truck outside the truck as long as that state honors my permit.
Mar 16, 2016 6:29pm

Brian Adams
Thomas J Badillo, the sleeper berth is not the passenger compartment, and does not need to be separated or locked in the sleeper.
Mar 17, 2016 10:53am

Ray Reed
If you have a concealed carry from your state. If you are in a state that honors your permit. You can carry a loaded gun because of that permit. The law does not distinguish what vehicle you are in. Now there are companies out there that do not like you to have a gun in their truck. I am an owner operator and I do carry a gun...
Mar 16, 2016 6:31pm

Alex Csiki
One Truck driver was shot at truck stop in Oklahoma because he didn't had cash on him when the Suker asked him to give him some money .. I was there the lucky driver guy survived..
Mar 16, 2016 10:00pm

Andy Falenski
Chris, it's the state laws that stop me. I travel in states that will arrest me and charge me if they find it.
Mar 15, 2016 7:18am

Michael Mathews
You can it's not against the law n it's the company that has regulations. Dot has never took mine
Mar 15, 2016 1:40pm

Gerald Gross
Andy Falenski unless u got some kinda felony u can't be arrested
Mar 15, 2016 7:40pm

Andy Falenski
I was in an accident years ago in New York. I was taken to the hospital in an ambulance and my totaled car was towed. Fortunately the .45 I had under my seat wasn't found by the police. If it had been, that would have been a felony. Minimum five year sentence. You're crazy to carry in states that you're not permitted.
Mar 16, 2016 12:42am

Andy Falenski
Greg Kiddo Sr. Exactly! It's amazing how many drivers don't understand gun laws and how they affect us.
Mar 16, 2016 7:21am

Don Tireman
One night in Michigan between Detroit and Port Huron, I stopped for the night at a rest area..a guy was outside his car parked next to me as I sat in the cab doing paperwork and he was watching me intently. I got a creepy feeling as this continued for several minutes. I made sure all the doors were locked, went into the sleeper, closed the curtains and turned off the light. This creep then moved closer to my truck and I felt helplessness and panic, because his body language, especially his facial expression, screamed a contemplation of getting access to me and doing me harm. I began mentally preparing to do whatever was necessary to escape if he made any move closer to me..after another pause that seemed to take an eternity, he got in his car and left the rest area..Needless to say, sleep was very hard to come by for the rest of the night...
Mar 16, 2016 11:19am

Phillip Matsukevich
Hey guys you can carry in your truck just check your state
Mar 16, 2016 4:52pm

Beth Howells
Chrissy truckersfinalemile put up that reward not the cops or anyone else so syh all you want
Mar 15, 2016 9:48pm

Tiny Mcfee
Why hasn't the cops put up a reward?? Now I'm smh. Guess the ones who sacrifice daily to bring Americans goods, lives aren't worth a reward. Not to mention there is a piece of shit killer on the loose
Mar 16, 2016 5:02am

Don Wills
NO disrespect to the driver , but how did the person get in the cab ?? I don't ALLOW ANY ONE WHO I DON'T KNOW AND I MEAN THAT I DON'T KNOW WELL IN MY TRUCK . DRIVERS NEED TO BE WARY OF ALL THE. HARD LUCK STORIES AND.PROTECT THEMSELVES FROM HARM
Mar 16, 2016 8:35pm

Software Scripts
Anything related to this is really important
Mar 16, 2016 9:30am