Troopers and Truckers Team Up To Crackdown On Dangerous Motorists


Statistics have long shown that the majority of passenger vehicle and semi truck crashes are caused by motorists and Nevada is the latest of many states taking a more hands on approach to curbing the increasingly fatal problem. This week Nevada Highway Patrol’s “Badge on Board” crackdown has troopers riding in unmarked semis to catch dangerous motorists in the act. Once they spot an illegal move from their perch in the semi, they contact officers in marked patrol vehicles to stop and issue citations. 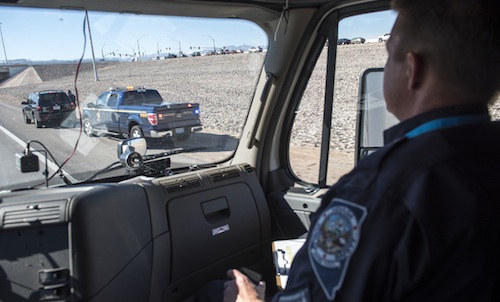 According to NHP, passenger vehicle drivers cause or contribute to 81 percent of the roadway fatalities involving trucks while truckers cause or contribute to 26 percent of the fatalities. The Nevada Department of Public Safety says it’s also becoming a worse problem and in 2016, the fatalities in such accidents increased. “Our goal is not writing tickets, it’s keeping everyone safe on our roadways. Failing to yield, unsafe lane changes, speeding and driving in a truck driver’s blind spot is not just illegal, it can kill you,” explains Lieutenant Roy Baughman.

Sergeant Murwin has been patrolling the roads for over 16 years and says his biggest issue is with motorists pulling right in front of trucks as they're coming up to an exit. He says he sees this happen all too often and that many motorists don’t realize that trucks are 80,000-pound monsters requiring a lot of space to stop. According to one veteran truck driver, a safe stop requires 100 feet even at 30 mph and 500 ft. for a fully loaded semi going 65 mph. "They figure they can beat the big rig. They're smaller, faster. But if something happens, that truck's not stopping. They're just not thinking about the truck, and what the truck driver is controlling." 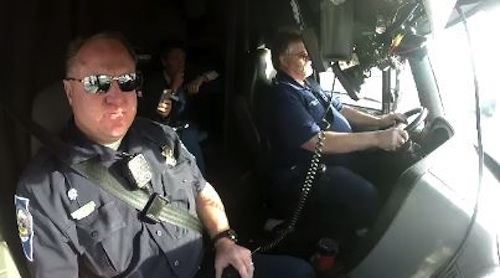 While the focus of the program is to crackdown on dangerous and distracted motorists, truck drivers are certainly not immune. “There are absolutely harsher limits for truck drivers, every offense is a primary offense,” says Patrol Sgt. Michael Cooke. “They would kill someone easier than a vehicle driver.”

The Badge on Board program will run until April 20, 2017 and officers will be on the lookout for the most common driving behaviors leading to accidents:

Failure to yield the right of way

Failure to use due care

Aggressive driving (a combination of two or more behaviors)

"Badge on Board" officers will also be using the campaign to hand out fliers educating motorists on how to share the road safely with semis.

Ritch Schut
81% + 26% = 107% nothing like proof reading prior to posting. Those numbers are skewed some too. These numbers don't factor in the party who ACTUALLY Caused the accident. The percentage of 4 wheelers who cause them is actually a bit higher. One needs to bare in mind that if a logbook isn't right, or a piece of equipment is somehow deficient the truck driver gets the blame. Not to mention the times when a truck driver gets cut off by a 4 wheeler and doesn't have a dash cam to prove that they are innocent. Go back say 10 to 15 years and i would have estimated the 4 wheeler percentage to be between 90% and 95% to blame. Today though, I would estimate that they are more like 85% to 90% the cause. Anyone who actually asks why it is the percentage of the time we are to blame is going up, really needs to pay attention to what they are seeing on the roads today. The amount of distracted and tailgating drivers in big trucks i see is going up rapidly.
Apr 20, 2017 3:24pm

Ritch Schut
David Casteel than by all means pull up some actual numbers based on fact. my estimates are just that, estimates.
Apr 20, 2017 6:17pm

Robert McDougal
If you read that closely, it says "cause or contribute" so if BOTH drivers contribute to it, then the percentage could be higher than 100%.
Apr 20, 2017 7:17pm

Chad Rogers
The two numbers are not part of the same statistical analysis. Re as fit again please
Apr 21, 2017 8:28am

Kirk Righetti
I hope everything state.amd the federal government is listening...and stop blaming semi for all road issues.
Apr 21, 2017 2:19pm

Dan Bowkley
Caused or contributed. Some accidents were contributed to by both a trucker and a fourwheeler.
Apr 23, 2017 11:11am

Joseph Howard
Good finely now they see what we go threw come to south fla. Ftl fl ride in my truck and sit back. Watch what happens you will be surprised have other unites ready i was working for a tow compy that towed for sherrif dpt ride with me doing heavy haul and see what happens between cars and other tow companys that has contracts for towing ride with a outsider tow drivers cut off people cars cut back the towes compys have fdle contracts think their above and beond the law and nobody can touch them because of who they work with
Apr 20, 2017 3:41am

Caroline McCandlish
I agree that the CDL DRIVERS are over regulated. I see no reason why this could be done in training for the CDL's. I don't see adding additional expense to course or the CDL for gov to make additional funds to make interest off of it. However, I see no reason why this couldn't be added to course for regular Driver Liscense. If the gov. were to charge a fee, I as a tax payer would expect to see an account set up for the victums.
Apr 20, 2017 8:45am

Doug Bloemendal
I live in Michigan, and I see it ALL the time!!! Especially not useing their turn signals! I think that they just dont care!!! But, you know it takes SOmuch energy to raise your hand up to use your signal!!! Another thing is, talking on the phone, thats another thing I see all the time! Wel l, thanks, and drive consideritly!
May 01, 2017 3:57pm

Michael Morse
Cracking down? Do they plan to flatten out the mountains? Cars can go up and down hill faster than trucks on the steep grades. How do they plan on making car drivers aware that they are about to run into a truck that is doing 40mph less than they are?
Apr 21, 2017 5:33pm

Terry-Lisa LaForme
Let them ride with me in my pilot car and see how the trucks actually run me off the road because they're in such a fricken hurry to get past an oversize load
Apr 21, 2017 4:13pm

Rod McDonald
85% of the cars passing me are on their phone texting, fbing, or something. Smart Real smart passing 80k with your knee Driving the Car!
Apr 22, 2017 9:57am

Britton Love
They could make millions in fines just from drivers texting and driving..
Apr 22, 2017 6:43pm

Rus Halvorson
Your an idiot... Come drive thru Vegas once or twice... This program helps A LOT. people out here drive like complete morons I spent almost 19 years driving O.T.R., retired in Vegas, and there are some of the worst drivers here you'll find. Funny thing is, 9 times out of 10, when you see someone doing something REALLY stupid...Look at the back of the car. It usually has California plates on it
Apr 21, 2017 8:23am

Sue Domenico
Bradley Harp are you a driver? They need this in every state. People are rude and ignorant. Its me me me. I also hope they stiffen and enforce laws on cell phones
Apr 21, 2017 11:04am