The latest episode of big-rig police chases happened on Monday and this time it starred an Arizona truck driver who led Kentucky authorities on a 69-mile chase and then ended up in jail facing multiple felony charges. 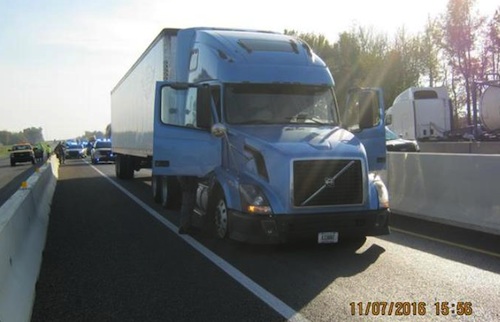 According to Kentucky State Police, the incident occurred on Monday afternoon at around 1:15 pm when 42-year-old Hussein Abdikadir Ali of Tucson, AZ was traveling through Warren County, north on Interstate 65 and a Kentucky State Police Commercial Vehicle Enforcement Officer attempted to pull the truck over for a random safety inspection. Police spokesperson, Sgt. Jason Morris says that Officer Jeremy Duvall was simply doing his job pulling over commercial vehicles for random inspections and did not anticipate this stop to be any different from the norm.

However, the truck driver did not anticipate being pulled over at all and rather than complying with the officer’s orders he decided to take off. What ensued was a 69-mile chase, accumulating a trail of seven patrol cars and several Troopers trying different tactics to stop the semi. But the driver just kept going and going. Finally at about two miles north of Sonora, where police had deployed spike strips to puncture the truck's tires, the disabled rig was forced to stop. But the trouble didn’t end there. Ali again refused to comply with police orders and wouldn’t exit the truck, eventually forcing the officers to take him down.

Morris says that it isn’t clear why the truck driver would decide to take such a risk and flee when the truck was being operated legally and they didn’t find him with any illegal drugs or contraband other than a gun he didn’t have a permit for. "We honestly have no idea, and he never would tell us," Morris said.

Unfortunately the driver’s decision landed him in jail facing serious charges of first-degree fleeing and evading police, three counts of first-degree wanton endangerment, speeding 13 mph over the limit, carrying a concealed deadly weapon, license to be in possession and resisting arrest.

Jason Peacher
Who gives a shit if some people are offended by mere words. I am a United States citizen, I do have laws that protect me, like the 2nd amendment and Self Defense. If anyone gets offended, then those folks are the one who got butthurt.
Nov 10, 2016 11:15am

Darryk Cromwell
So many new drivers should not be driving. Criminal records should play a role in qetting your cdl
Nov 08, 2016 9:57am

Robert Saberhagen
I know lots of drivers who when younger got themselves in trouble with the law but they are now dam good drivers and no longer in troubles of any kind maybe u shouldnt stero type people or why dont u just say once a criminal stay a criminal because u dont want to give them a chance to pull themselves up and become productive in a free society they paid there debt not every one is extra special like you
Nov 10, 2016 5:06pm

Joshawa Allen Lister
Unless he was carrying it or had it loaded not stowed empty
Nov 09, 2016 2:22pm

Carron Paskiewicz
Its not illegal to carry a gun with an arizona license what a dumb ass
Nov 10, 2016 12:29pm

Carron Paskiewicz
Most states go by arizona law or at least they go with it if you have an arizona license
Nov 10, 2016 3:47pm

Robert Saberhagen
It is a federal law that you can not carry a firearm in a commercial vechile and federal law over rides state law
Nov 10, 2016 5:09pm

Carron Paskiewicz
Point being is you have the right to protect yourself show me the law that says it
Nov 10, 2016 5:20pm

Carron Paskiewicz
Really my ex and our son does and the cops know and they dont do anything so whats your pointu
Nov 10, 2016 6:17pm

Ronald Gaczewski
Trump supporter,heard he was going to be deported
Nov 09, 2016 5:33pm

Kris Carter
Well my name Kris is French and Carter is English yet, I'm mostly Scandinavian. Am I not American either?
Nov 08, 2016 3:33pm