Who could forget the tragic crash that involved a FedEx truck driver and a busload of high school students last April in Orland, California. Now just over a year later, the investigation has finally concluded and today the California Highway Patrol released an official statement ruling the FedEx truck driver at fault for the fiery head-on collision that ended his own life, the bus driver, five students and three chaperones. 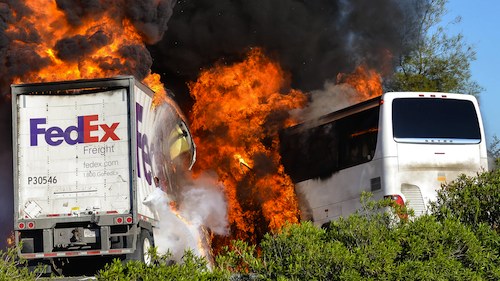 “The underlying cause of the crash is the FedEx truck driver, Tim Evans, 32, allowing his vehicle to travel across the median in an unsafe turning movement. He could have fell asleep, he could have had an undiagnosed medical condition. We're unable to prove either," said Sgt. Nate Parsons. The California Highway Patrol held a news conference Friday, after meeting with family members of the victims killed in the collision. “Evans had sufficient time off," Parsons continued. "That day he had been working approximately eight hours at the time of the collision. But he had between eight and 10 hours of sleep the night before." 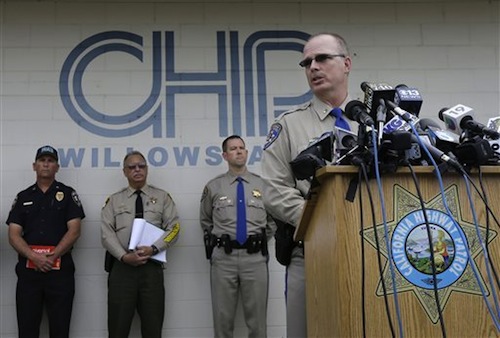 FedEx has not yet made any public statements about the CHP report and do not plan on doing so until the National Transportation Safety Board finishes its separate investigation, according to FedEx spokesman, Jim McCluskey. The main question that everyone has been asking since the crash, is what caused the FedEx truck to gradually cross the interstate median into oncoming traffic. Investigators had immediately reported finding no evidence that the truck driver had attempted to slow down or swerve. Earlier this month, the National Transportation Safety Board released documents showing Evans had no drugs or alcohol in his system and was reportedly in good health. However, the records also included various witness accounts offering insight into the investigation. One passenger seated three rows behind the bus driver reported that he saw Evans with his head down and slumped toward the door immediately before the crash. Another motorist driving on the highway right before the crash occurred, said the FedEx truck’s left turn signal was on before it changed lanes and drifted across the median. Yet another account by a couple driving a sedan that was sideswiped by the truck right before the crash, said that they saw flames coming out of one of the truck's trailers. However the board investigators found no physical evidence to indicate that any such fire occurred, only the explosion ignited by the impact of the crash.

What we do know is that the deadly crash occurred on April 14, 2014, near Orland, California, about 100 miles north of Sacramento. The bus had been carrying high school students from the Los Angeles area who were visiting Humboldt State University as potential future students. Two of the three chaperones killed both were engaged to be married the following year. The many grieving families and friends of those who died in the crash still aren’t any closer to knowing what really caused this tragic incident to occur. Carla Haywood’s daughter, Mattison, was one of chaperones whose life was cut short and says that the investigation has not answered their central question of why the truck driver left the road. "We're constantly wondering what happened, questioning what could have been prevented," said Haywood.

Eric Ethridge
Sorry but for a Fed ex driver to cross the road is like the proverbial chicken crossing it! They wreck more than swift
May 22, 2015 6:19pm

Scott Schwanger
What happened to the Proven fact that the DPF was leaking fumes into the cab?.... This is bullshit with the Driver taking the rap for a malfunctioning EXH system....
May 23, 2015 6:04pm

Shawn Hubbard
If he was slumped in the seat after leaving the roadway, he probably wasn't sleeping because the truck leaving the roadway would have been pretty violent and woke him up. Sounds like he had some medical episode and was unconscious.
May 23, 2015 12:26am

Joe Swett
The DPF system malfunctioned and caught the truck on fire. CA won't admit the things are dangerous junk.
May 24, 2015 9:51am

Travis Willard
I drove 35 years text fraction of a second so many different things to go wrong came close a couple times myself is horrible when you see drivers get hurt and kill I'll see both I have been fortunate and lucky not to have no action here I'm retired now thank God! God bless the drivers family
May 22, 2015 6:26pm

Lee Wade
I know of a driver that crossed the center, other lanes, and ended up in a field because got chocked on his chewing tobacco. He said when you can't breathe that you forget about everything else.
May 23, 2015 5:58pm

John Gerondidakis
They all drive like idiots . Going 70mph with doubles down the Long Island express way see them all night long
May 23, 2015 11:19am

Penelope Townsend
They seem to always be involved in wrecks. Having said that i saw a tanker wreck in front of me. Got driver out and he was just shook up. He said he took a drink of coffee and started choking and blacked out. I am a nurse and what happened was he got a vasovagal reaction to choking what indeed causes some people to pass out. Who knows what happened in fl and probably never will. But fact is truck crossed the median so trucks fault.
May 25, 2015 7:25am

Girn Blansten
I'm a little offended by the repeated calling not so swift and fag sex steering wheel holders "drivers". Stop it, please....
May 24, 2015 12:12am

Jeff Perry
The DPF system malfunctioned ....caught the truck on fire quickly overwhelming the unaware driver and caused the wreck retards ....pull your heads out of your asses if you say otherwise .
May 25, 2015 7:17pm