Gridlock, traffic, congestion - whatever term one uses to describe sitting idly by while on one of the nation’s roadways anticipating the end of traffic, looking at one's GPS, and hoping for an exit to escape it all, none of it is enjoyable.

For truck drivers it is truly a concern on the road. Many believe that time equals money -and time equals billions for the trucking industry, according to a new report from the ATRI. 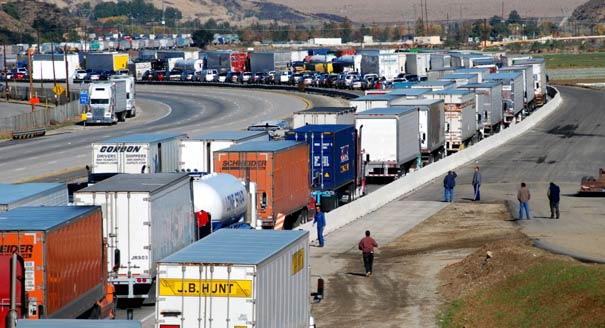 According to the U.S. National Highway System Traffic, congestion added more than $63.4 billion in operational costs to the trucking industry in 2015, according to research released by the American Transportation Research Institute.

In conducting the report issued earlier today, the ATRI utilized a variety of data sources including its unique truck GPS database; it calculated delay on the NHS totaling more than 996 million hours of lost productivity, which equates to 362,243 commercial truck drivers sitting idle for a working year. That’s quite a few hours to simply sit inside one’s truck while on the job.

ATRI’s analysis also documented the states, metropolitan areas, and counties that were most impacted by these delays and subsequent cost increases.The top 10 states experienced costs of more than $2 billion each, with The Sunshine State, Florida, and The Lone Star State, Texas, leading with more than $5 billion each.

Traffic is the Worst in Urban Areas

The analysis also reports that the impact of congestion costs on a per-truck basis are high, with an average increased cost of $22,676 for trucks traveling 100,000 miles a year.

As part of this analysis, ATRI has updated its congestion cost database with 2015 data to provide granular cost information to transportation planning officials on the hours of delay and associated cost by major jurisdiction type and road level.

The bottom-line to the study and what it all means to an individual trucker is that the state of congestion is particularly detrimental to one’s job.

“Congestion-related costs continue to rise and impact our supply chains. A 5-minute delay for each UPS vehicle, every day, costs UPS $105 million annually in additional operating costs. ATRI’s report quantifies this drain on the economy which must be addressed through targeted infrastructure investments,” said Rich McArdle, president of UPS Freight.

ATRI is the trucking industry’s 501(c)(3) not-for-profit research organization. It is engaged in critical research relating to freight transportation’s essential role in maintaining a safe, secure and efficient transportation system.

To learn more about the current state of congestion, one can order a full report from ATRI by visiting here.