A former Arizona truck driver pleaded guilty to first-degree manslaughter after authorities traced him to the 2014 killing of a 24-year-old New Mexico woman. At the time, she worked a prostitute and met up with him one night while he was traveling through the area. She was never seen again until her nude, decomposed body was found in the brush along Interstate 40 near Hinton, Oklahoma. 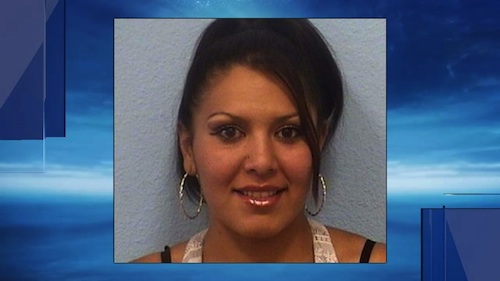 The victim, Veneranda Flores, was reported missing from Albuquerque, New Mexico, on Dec. 21, 2014. She had made plans to go to a movie with a friend that night but never showed up. Her father knew something was seriously wrong when he didn’t hear from her by Christmas Day. He said the last time he had spoke to his daughter was on Dec. 17, 2014 when she called him from Albuquerque to wish him a happy birthday and promised to call him on Christmas Eve or Christmas Day. But Flores said he knew something was very wrong when that call never came because that just wasn’t like his daughter. “She and I were very close. She would have gotten a hold of me somehow She was constantly in contact with me. I didn’t think we were going to find her alive,” he said.

Albuquerque police began investigating her disappearance and immediately questioned 40-year-old Juan Manuel Gonzalez Jr. after phone records showed he and Flores had been texting each other on the day she disappeared. He had admitted to investigators that he had picked up "a prostitute" while driving through Albuquerque and said he did not remember her name. He claimed they spent some time at a casino and then he dropped her off in Albuquerque. He said it was the last he saw of her before he got back on the road to deliver a load to the East Coast. 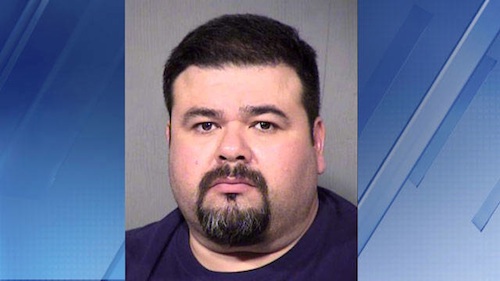 It wasn’t until over a year later on April 7, 2015, when Oklahoma State Transportation Department workers found the extremely decomposed remains of a nude woman along I-40. It took until last August before the victim was finally identified as Flores through DNA. Investigators then looked back into Gonzalez’s GPS records, which confirmed he drove through Oklahoma on I-40 early on Dec. 22, 2014. Investigators also concluded he had disabled his GPS computer for a period of time as he searched for a place to dump the body. He then turned the GPS back on at a truck stop in Hinton. On his way back to Arizona, he had called his girlfriend and she said he told her he was "having nightmares and hearing voices and couldn’t take it any longer." When he returned to Arizona on Jan. 2, 2015, he abruptly quit his trucking job.

A few days after Flores’ body was identified, Gonzalez was arrested at his apartment in Glendale, Arizona. On May 8, 2017, he appeared in Caddo County District Court and agreed to a plea deal. He pleaded guilty to first-degree manslaughter and unlawful removal of a dead body and was sentenced to only 12 years in an Oklahoma prison. He will also be on probation for 30 years following his release.

Jennifer Armenta
Wow I knew her personally and she was a beautiful and sincere person. 12 years for taking the life of a daughter, sister, aunt and friend is not enough. This man needs to face a death sentience. Her family has been through so much and this is not justice. RIP veranda.
May 10, 2017 9:21pm

Trucking Unlimited
We are so sorry you lost your friend and in such a brutal way. Thank-you for sharing with us the person she was and it is pretty unbelievable 12 years is all he got.
May 10, 2017 9:49pm

Steve Schwab
Sorry for your loss. In 1989 a good friend was brutally murdered, she was 16 years old. It took years to catch the pos that killed her. Thankfully DNA came into play and got his butt. He also got 12 years. Now he is out and has a new family and gets to live life. I don't see how that's fair nor justice, at all. In her case he didn't get longer because he didn't fight it at all. I'm sure it was a plea deal as well.
May 10, 2017 10:14pm

Trucking Unlimited
that is insane! 12 years for killing a child! it seems in many cases, the more time goes by the lesser the punishment. very sorry you lost your good friend so young.
May 11, 2017 12:05am

Felix Flores
He could have walked if we pursued a jury trial, the official cause of her death was 'inconclusive.' If we have to live with this everyday, I hope she haunts him the rest of his life. Drive him insane sis! Miss you...
May 11, 2017 4:23pm

Trucking Unlimited
Thank-you for sharing this with us Felix. We are so sorry this happened to your sister. COD was probably only inconclusive because she was left out there for so long. Sometimes in plea bargains the person has to provide an account of what happened...did he ever do that at least?
May 11, 2017 8:14pm

Trucking Unlimited
That's true. It would be hard to take and probably never the real truth anyways.
May 12, 2017 12:23am

Gerald Irvin
Felix Flores....sorry for the loss of your sister and I pray for some type of comfort and healing for you and your family....as a truckdriver myself,,I hate hearing these stories because it really doesn't ease the pain and suffering of missing your loved ones....I wish his sentence was more harsher than it is...he probably won't even do it all....your pain and hurt will probably ease in time at least I pray and hope so....you and your family stay strong and always remember the good times with your sister....it helps....God bless...🙏🙏🙏🙏🙏
May 12, 2017 1:45pm

Trucking Unlimited
Was she your cousin? Very sorry your family has to go through this! How do they feel about the sentence?
May 11, 2017 12:06am

Trucking Unlimited
12 years doesn't seem like justice at all - especially for taking your cousin's young life in such a brutal way. The one good thing is that at least your family can have the piece of mind that the person was caught. Not that it makes the situation any better..but so many cases go unsolved and families never get answers.
May 11, 2017 4:33pm

Andrea Ortega
12 yrs is better than what he would've gotten in NM. Maybe only 4 yrs. Why is he in Arizona? He should've gotten time here in NM... Where someone would've taken him out. She had alot of family... Someone will do him good inside. He's gonna die in there, guaranteed.
May 10, 2017 11:20pm

Franchesca Hentsch
Nanda was indeed beautiful, smart, funny, and full of life. 12 years is RIDICULOUS!! We will always have her in our thoughts and she will be missed.
May 11, 2017 7:56am

Mary Anne Baca
This is why I Pray so much...GOD saw everything!!! I knew Veneranda as a little girl...she and her Brother would come over to my home and play with my GRANDdaughter... They were very well-behaved, respectful children, I am sooooooo sorry for the family's loss!!! That POS did not get away with it.... I Promise!!!! GOD IS GOOD AND JUST!!!!!!!! That POS still has to stand before GOD ALMIGHTY!!!!
May 11, 2017 8:01am

Brittny Ann Lucero
This girl was from my home town! People loved her she worth more than 12 years! This monster deserves to rot in hell for what he did. What a fuckin joke!
May 11, 2017 8:25am

Sincere Garcia
Wow seriously 12 years that ain't shit for scums like that a life for a life right he don't serves a second chance at being free hell jus go in do it again did he give nanda a second chance NO there jus giving him it all for free food a roof over his head health treatment n dental when poor people struggle every day to eat or to have a roof over there heads and especially people are barely making it n can't even go to the doctors that's the awful part n us tax payers have to pay for disgusting people like him that don't deserve to even be put in prison kill that sick bastard
May 10, 2017 9:56pm

Sam Lujan
You get more time for cattle rustling.... he should have been imprisoned here in New Mexico
May 11, 2017 6:25am

Franchesca Saiz
rest in peace nanda ...piece of shit only got that much time you will always be missed
May 11, 2017 4:45am

Ruby Sandoval
SICK BASTARD I HOPE THEY BREAK HIS HANDS BACKWARDS FOR WUT HE DID TO MY PRIMITA!! R.I.P NANDA
May 11, 2017 6:19pm

Robert Gonzalez
No if you kill someone you should be put to death. Not in a year not in a decade but in a week after found guilty! Justice is not swift neither is the penalty for any crimes therefore crime is rampant! When I grew up if we did something wrong we were spanked immediately not years later.
May 11, 2017 6:54am

Randy Grant
No it's not enough time!!! Hang him so the taxpayers don't have to keep his ass in prison!!!! Then he gets out and does it again!!! Enough pussy footing around with criminals
May 11, 2017 1:26pm

Ernestina Lopez
There are so many things left undone for our beautiful Nanda Flores...� Her spirit is strong,even now that she is gone.. Karma is a bitch..and he better believe its gonna hit him like a ton of rocks..who knows maybe the bastard will hang himself..fingers crossed..miss her so much..
May 17, 2017 7:18pm

Debra Denham
I'm so sorry for the loss to the family and friends of this young girl. I cry out for justice. Jail house, where ever! But definitely we'll see it on judgement day
May 12, 2017 3:03am

Ronald Wilson
You can hope to learn later, that he won't make it six months before he gets shanked. I'm surprised that some of these thugs have made it as long as they have.
May 11, 2017 4:41am

Victor Collins
Ok I haven't read the article but try this on. It is extremely possible that wits plea, the man could have walked away free. Jury's don't always convict!
May 10, 2017 3:10pm

Steve Schwab
Victor is right. Sometimes it's better to get a plea or lower charge and be a for sure thing than risk going for full charges and they walk. Sad but true. It happens too often.
May 10, 2017 10:10pm

Adrianna Rae Smith-Stinnett
Nanda was my good friend and I wish I could see her just one more time and get to talk to her may she RIP. Miss you girl
May 11, 2017 7:30am

Michael Fernald
I don't feel sorry for prostitutes. There are other jobs out there. Sorry she died but she was playing a dangerous game.
May 12, 2017 6:00am

Mark Burkholder Gayle Grindle
He should get the death penalty
May 10, 2017 5:43pm

Anthony Leichty
He deserves death nothing less than his victim
May 11, 2017 6:33am