Who needs the Indianapolis 500, NASCAR, or a weekend watching monster trucks trample each other at the local arena? There’s a new kind of race and it has to do with big rigs.

Thanks to the Minimizer Bandit Big Rig Series, it’s now about welcoming big rig tractor truck racing – also referred to as Circle Track Truck Racing – to the short track in the United States. It’s a series designed to be affordable and accessible for anyone wishing to put together a race team, according to organizers. 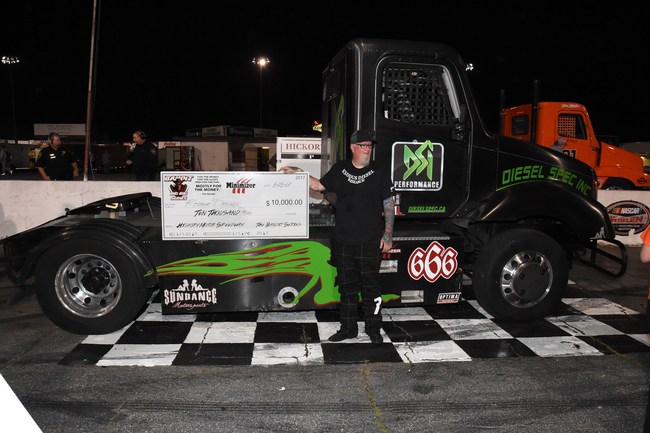 Fans will be ready to hoot and holler as these big rig races have a truck for everyone to cheer for: Peterbilt, Freightliner, Mack, Western Star and Volvo. With high output power plants to match featuring Detroit, Cat and Mack models, the Bandit Big Rig Series has several large industry names covered.

Can’t wait any longer to attend? The races are already in motion as the Bandit Big Rig Series recently kicked off its latest racing season in North Carolina, and get this, a cash prize of $50,000 is available at every race.

Kruckeberg was in Sin City to announce the launch of the inaugural 2017 season of the Bandit Big Rig Series that zoomed into the iconic Hickory Motor Speedway in Newton, N.C. on March 25.

For those attending future races, expect fast-paced crashes, spinouts and an event where drivers are awarded extra points for passing.

Billing itself as the "Workin' man's race series," the rules are structured to make the Bandit trucks affordable and accessible. The series touts that, "You can't buy a win."

The formula is proving to popular and the Minimizer Bandit Big Rig Series hopes to bring more visibility towards the trucking industry as a whole.

"Our objective is to raise the awareness of the heavy duty trucking industry and provide marketing exposure and R&D opportunities for our sponsors," Kruckeberg said in a recent interview.

Hoping for a New Generation of Truckers

The Minimizer Bandit Big Rig Series hopes to provide a new twist on trucking: "The family entertainment approach of this series creates that opportunity," said Brian Madsen, director of operations.

Bandit Big Rig says the races are catching on, as its website, www.banditseries.com, has nearly 50,000 page views in the first quarter and Facebook impressions are more than 2 million. These results are reported after a handful of races.

"I'm excited the trucking industry finally has its own racing series," Kruckeberg said. "It doesn't get more grassroots than this!"

The inaugural 2017 season will take place in the Eastern and Central United States. The series wants to expand West by 2019 to establish a national "King of the Bandits.”

The full 2017 race schedule and track locations can be viewed at www.banditseries.com/schedule.