The zero emissions trend surfaces with one of the most well-known names in trucking – Peterbilt today announced its Model 520 refuse truck demo equipped with an advanced battery-electric drive system.

“Peterbilt is working closely with its partners to explore the capabilities and performance of battery-electric drive systems.” Said, Peterbilt Chief Engineer, Scott Newhouse. “Customers in urban environments and applications such as drayage and refuse collection stand to benefit from the zero-emissions performance of these advanced vehicles.” 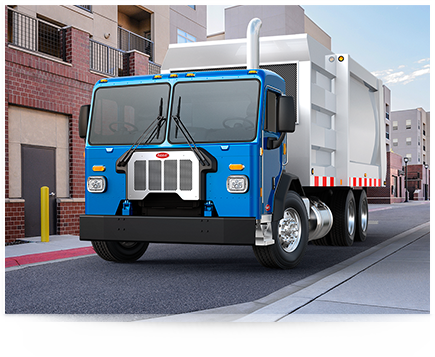 Peterbilt notes that it is moving towards providing solutions for implementing more alternative fuel and zero-emission trucks, especially for those within the heavy refuse truck division.

“Powering heavy refuse trucks is a logical next step in the adaptation of our electric drive technology to vehicles requiring conversion to zero-emission operation,” said Goldman.

Designed for Peterbilt’s 520 refuse truck, Transpower’s ElecTruck uses a battery pack that generates enough energy to run for 8 hours or 65 miles on a single charge.

The Denton, Texas based company, Peterbilt has long been a provider of heavy duty trucking components and products globally, with a recent foray into alternative fuel and low-emissions vehicles.