A viral video has captured attention for showing just how unaware a big rig driver can be even in the  most obvious collision with a motorist. In fact, this particular driver was not only unaware that he struck a passenger vehicle, he also had no idea the car was stuck under his trailer and being dragged along the freeway with the terrified motorist still inside. 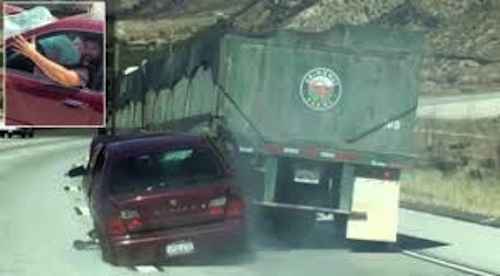 The bizarre incident occurred on Interstate 15 along the Cajon Pass in San Bernardino County, CA.  According to the CHP, a big rig hauling two trailers containing 50,000 pounds of carrots was heading northbound and came upon a slower-moving truck. The rig moved left into the No. 4 lane in order to pass the slower truck and struck a passing Nissan Maxima. The Nissan, driven by 34-year-old Javier Diaz Jr., became lodged under the truck and was dragged along the freeway for nearly a mile.

Meanwhile, motorist Brian Steimke was watching the incredulous scene play out and began recording it on his cell phone. In the video, Steimke drives up beside the badly damaged and smoking Nissan being dragged on its rear. The windshield is shattered, the hood crumpled, the airbag deployed and the tires are flapping on the pavement. The driver waves at Steimke for help and shouts, “He’s not stopping!” Despite several other motorists honking to get the truck driver’s attention, he remains oblivious to the high stake situation attached to his rig. Finally, a motorist pulled in front of the rig and got him to stop.

Steimke continued recording as he pulled over to confront the truck driver.

“ Why were you driving so far?”

As for Javier Diaz Jr., he’s just thankful he survived the ordeal and was able to go home to his family.

Ronald Wilson
I can't believe that the trucker did not know the car was hooked on his ICC Bar!?! First of all, because you could see his driver's mirror, and Secondly, no professional truck driver runs up Cajon Pass without constantly checking his mirrors... Oh! Wait! I forgot! He's a Produce Hauler that had to make it to the Pilot on US 395 at the top of the hill first! Wouldn't be the first time one of those particular Company driver's had a problem on that I-15 Pass. I've had my own personal experiences with the likes of them being ignorant about various reasons concerning their back pup trailer. I'm sure that the auto driver was at fault, but that remains a problem with the CHP and your typical idiot California Automobile and "Crotch-Rocket" Motor Bikes. There are "good" driver's and rider's, but they're a minority, rather than a majority.
Apr 23, 2017 8:23am

Carter Shaw
Funny? This Jackass makes the rest of us look bad! They mount mirrors to vehicles for a reason
Apr 24, 2017 7:28pm

Mike Howerton
Where is the terrified motorist?? You people kill me with these grabass titles!! ....moving on...its California....so no one gives a shit! Grimway farms truck...he probably can't even speak English...let alone have a license.... LOL LOL LOL. After watching the video a few times....THERE IS NO WAY THE TRUCK RUNNING THAT SLOW DID THAT MUCH DAMAGE TO THE CAR BY CHANGING LANES!! The car must have been flying!
Apr 23, 2017 2:08pm

Ken Cunningham
I've said the sand thing on other pages posting this.. there's no way the truck changed lanes into the car. For one it deploy the airbag..or like you said destroy the front end like it is. To me it's obvious to me the car rear ended the truck
Apr 23, 2017 7:09pm

Timothy Begle
No matter how many excuses you wish to make yourselves feel good in this age of dumbing down. The fact still is. The truck driver had a car dragging on his trailer, and let alone did he not see it. Once again 4-wheelers had to stop a reckless truck driver.
Apr 24, 2017 7:42pm

Bob Clapp
Don't be so quick to judge it's a trailer behind a straight truck going around a curve maybe in his blind spot ?
Apr 23, 2017 5:34pm

Mario Ortiz
thats why you as a profecional driver has to scan back and forth, the mirrors at all time, he was whit the music so loud tha he didnt hear the crasch, exacly the same accident happent to mi in Arizona and right a way i notice that some body struck on my back of my trlr
May 02, 2017 4:52pm

Timothy Begle
Drivers are just supposed to hold the wheel and look forward. Right? Least that's how a lot of them drive.
Apr 23, 2017 5:52am

Ronald Wilson
He knew it, and was wondering what to do with him when he reached the top, so he could shake it off and keep going.
Apr 23, 2017 8:26am