In February, President Trump stated that Sweden’s tolerance of immigrants would eventually lead to an extremist attack, similar to France and Berlin. On Friday, his prediction unfolded in a tragic truck 'terrorist' attack that left 4 people dead and 15 seriously injured. 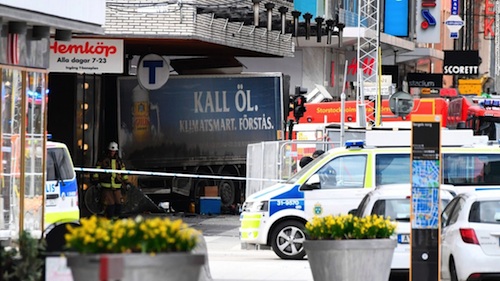 “Sweden has been attacked,” said Prime Minister Stefan Lofven in a televised address. “This indicates that it is an act of terror.”

The attack occurred Friday afternoon just before 3 p.m. in a busy shopping district in Stockholm. A Spendrups beer truck was parked on the street while the driver was out of the vehicle unloading and delivering beverages to a restaurant. Suddenly, he noticed a masked man was in the driver’s seat of the truck with the obvious intention of stealing it. The truck driver said he tried to stop the hijacker as soon he realized what was going on but had to jump out of the way when the suspect attempted to run him over. “We can confirm that the truck was stolen during an unload of products,” said Spendsrups spokesperson, Rose-Marie Hertzman. “The driver was just finishing the unload and a man came running up and hijacked the car and drove away." 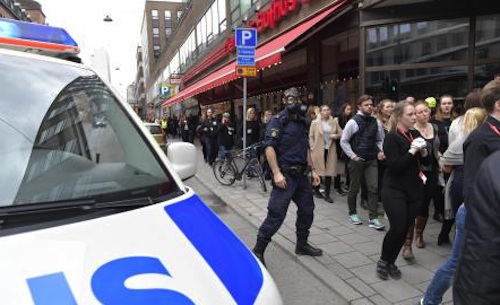 The suspect proceeded to plow the truck into the crowds of people along the busy street knocking down poles, sign and statues along the way. He then crashed the truck through the entrance of a department store located at the end of the block and immediately fled the scene. Within minutes the entire shopping district erupted in chaos, panic and bloodshed. Fire alarms went off inside the store as black smoke billowed from the vehicle and shoppers ran for the nearest exits.

"I turned around and saw a big truck coming towards me. It swerved from side to side. It didn't look out of control, it was trying to hit people," Australian tourist Glen Foran told reporters.

"It was like he was driving through paper. It's like it was nothing. I can't even believe how a person could do such a thing. And then he just kept on going. I was in shock," said another witness.

“We were running, we were crying — everyone was in shock,” added Katarina Libert who had been trying on clothes in the department store when it was attacked. “We rushed down the street, and I glanced to the right and saw the truck. People were lying on the ground. They were not moving.” 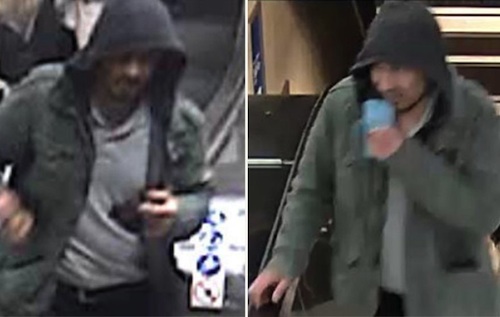 Swedish authorities worked fast to find the attacker(s) in a nationwide manhunt. Within hours they released a surveillance photo of a suspect in a green hoody coming up an escalator located near the attack site.  Police also brought at least two other individuals in for questioning but did not confirm if they were suspects in the attack. In a later news conference, Police spokesperson Jan Evensson confirmed they arrested a man who looked like the person in the surveillance camera photo. Early the next morning, officials reported the arrest of a second man in connection with the attack. Some reports indicate one of the men confessed his involvement and another report said the suspected attacker was a 39-year-old father-of-four from Uzbekistan. However, details about the suspects and their affiliations have yet to be confirmed by officials.

The incident follows a recent trend of commercial trucks being used to attack crowded public areas in European cities. Last year in France, a man drove into a crowd on a busy promenade during Bastille Day celebrations. In December, another attacker murdered a truck driver to hijack his truck and then plowed it into a crowded Christmas market in Berlin. Last month, a man drove a vehicle into pedestrians on Westminster Bridge in London.

Leon Hird
States like Maryland who welcome these foreign drivers and "protect" them...without even having a US CDL. doesn't make a lot of sense. Thise of you who live in a pretend world where it's all rainbows and unicorns... The fact is that if/when serious attacks turn to all out war...we'll lose all freedoms and be screened and herded like sheep....largely in part to confused liberals who would pick up arms and join the enemy while preaching "equality for everyone"...just to defy a government who protected them but didn't coddle them.
Apr 08, 2017 11:52am

Curt Moff
Yeah just blame the foreigners ...just the other day and American ran the wrong way on 24 high on whatever and tried to kill 8 people and then an officer.
Apr 09, 2017 1:09pm

Rick Lowe
Just look at the foreign drivers in the United States today It's not a matter of if but when
Apr 08, 2017 4:54am

Victor Collins
Those foreign drivers you are referring to are more than likely citizens of the United States of America just like you! So how sweet know you won't do the same?
Apr 08, 2017 8:58am

Victor Collins
So you are saying that you have seen the driver's visa or green card to say that they are not a citizen of the United States of America? So if you have great, I stand corrected, and if you haven't you have no idea what you think you see! What you think you see has been proven not to be so because the United States of America doesn't have an established language or dress code! Now please prove me wrong if you can?
Apr 08, 2017 11:51pm

Jesse Dey
So Justin Hoke his opinion makes him Republican. I voted Republican but do not share his mind set. You're stereotyping is no different than his.
Apr 09, 2017 9:03am

Chibuz Cederboom
I'm against accepting foreign CDL's. There is a lot involved, saftey, and legally when operating a commercial truck. All based upon the American way of life, and the USA way of business. I meet truckers who cant even speak English. But how do you stop a corrupt system designed by the corporation USA ?
Apr 10, 2017 2:15pm

Justin Hoke
I love it how the republican SHEEP think everything that happens in the world is coming to America and going to destroy us. LMAO. Here's what needs to happen. We need to send EVERY SINGLE REPUBLICAN to Syria, Iraq, Iran, or Russia, so they can see REAL terror, instead of what fox news shows them. Fox news version of terrorism is a JOKE.
Apr 09, 2017 5:47am

Martha Winslow Crop
Now, really that should happen to the liberals, so they will get in touch with reality!
Apr 09, 2017 10:22am

Keith Dennis
It's one thing to be a brain washed out of your mind stupid foolish idiot and another to put the overwhelming evidence of the same on Facebook.
Apr 09, 2017 7:44pm

Brenda Tipton
No we need to send all you liberal asses over there maybe they can blow you out of your bubbles
Apr 10, 2017 11:56am

Richard W Carlson
My family is right there and normally walking down that street in Stockholm Sweden
Apr 10, 2017 6:06am

Michael Myer
It will if they keep letting those goat fuckers to come here. Fucking worthless fucking rag heads all need to be killed.
Apr 09, 2017 6:31pm

Victor Collins
It's not the Muslims either, it is anyone who wants to kill for whatever reason! They will find a way, if that is what they want to do!
Apr 08, 2017 11:54pm

Angela Glassburn
My husband used to train drivers and he trained a lot of drivers that were from other countries.
Apr 09, 2017 6:15am

Ted Smith
in order to catch someone , you have to be smarter than the perpetrator, of course you already knew that
Apr 17, 2017 4:23pm

Terry Kiggans
Agree Leon Hird need to do more through background check on anyone not being from this country
Apr 09, 2017 8:52am