More details have been released about the tragic Texas crash that killed 13 people traveling in a minibus, on their way back from a church retreat. A witness who made several 911 calls trying to prevent the crash has come forward with his account of events. Authorities have also released the identity of the pickup truck driver who caused the crash as 20-year-old Jack Dillon Young of Leakey, Texas. Young survived the crash and has since acknowledged that he was texting while driving. 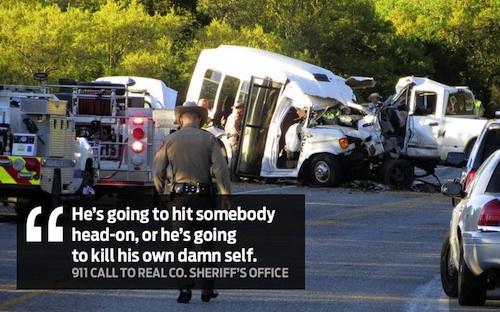 The crash occurred on Wednesday on a two-lane road about 75 miles of San Antonio, near the town of Concan. On Friday, authorities confirmed that prior to the accident, two witnesses had tried to prevent it from happening by calling 911 and alerting dispatchers about a white pickup driving erratically. Jody Kuchler was one of those callers and he has since told reporters that he was driving behind the truck and became concerned when he saw it dangerously weaving back and forth over the center line several times. Kuchler was traveling with his girlfriend and they continued to follow the truck while she captured the erratic driving on her cell phone. He made multiple calls to both sheriff’s offices for Uvalde and Real counties and told them “they needed to get him off the road before he hit somebody.”

“The caller was scared the pickup driver was going to cause an accident and asked us to send deputies,” Uvalde police Lt. Daniel Rodriguez confirmed. Meanwhile, dispatchers in Real County received another call from a woman who also warned them about a white Dodge pickup driving erratically on U.S. 83. Real County officials called Uvalde County officials to coordinate a response to send deputies, but it was too late. Within minutes both Kuchler and the woman called back informing them the truck had struck another vehicle. And it was bad. 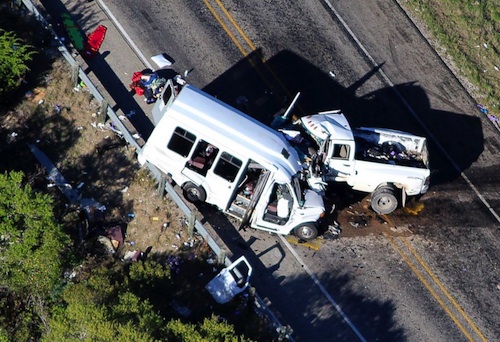 The wreck occurred along a curved section of the road where the speed limit is 65 mph. Kuchler and his girlfriend captured video of the driver going up to 80 mph and continuing to cross back and forth over the center line. They also witnessed the horrific moment the truck crashed head on into the oncoming New Braunfels church bus. Kuchler immediately called the Real County Sheriff's Office and told them, "I got this guy on video hitting this bus head on. Y'all get Life Flight. I hope they already called Life Flight. This bus if full of elderly people."

Kuchler said he then ran over to the mangled wreckage to see if anyone was alive. The only person he found responsive was the young pickup driver pinned inside his truck. Kuchler says he shouted at him, "Son, do you know what you just did?" The driver responded with a flood of tears and apologies. "I’m sorry, I’m sorry. I was texting."

Young was airlifted to University Hospital in San Antonio in stable condition. 64-year-old Rose Mary Harris was the only passenger on the bus to survive the crash and she remains in the hospital in critical condition. NTSB said it's conducting a full investigation with local authorities to determine all the factors involved in the crash and whether Young will face any charges.

James Collier Jr.
WHETHER he will face any charges? Dumb bastard ought to get thirteen life sentences to think about what he's done.
Apr 01, 2017 2:37am

Justin Hoke
if he doesnt face charges, I hope the entire state of texas burns to the ground and kills everyone in it...
Apr 01, 2017 10:25am

James Collier Jr.
Justin Hoke Trust me, they're going to fuck his ass. I know of an idiot that went to jail for twenty years in TX for taking a pic of his junk near a woman's mouth. Never even touched her and he got twenty years for a picture. Of course, he wasn't remorseful like this idiot, but I doubt that's going to help him much.
Apr 01, 2017 11:09am

Robert A. Craft
There No Reason Phone Manufacturers and Phone Companies can't disable most of a phone's capabilities when the phone is moving! They know the Dangers but want the Money! Make them Pay Big Time and these Deaths will stop.
Apr 01, 2017 5:55am

Fernando Ubarr
Steve Lapp they can make a phone call, why is it too dificult or why people now don't want to speak?
Apr 01, 2017 7:20am

Kathleen Squzdndmddl Allen
They wont make it a law to disable the function because law enforcement n government officials are guilty of it also.
Apr 01, 2017 7:20am

Victor Collins
Why shift the responsibility from the person to the manufacturer? Using that logic, anytime there is a vehicle crash, should we hold the car makers responsible for someone else's screw ups? Or how about the road makers, because without roads people wouldn't be driving therefore would not have died in a crash?
Apr 01, 2017 8:53am

Justin Hoke
Robert, let me guess, you are a liberal, right? Always trying to shift the blame to everyone and everything else. You should be shot!
Apr 01, 2017 10:32am

Arnold Dove
We used to be able to live with a landline phone. No texting, no Facebook, no nothing... Yes I think the providers of service should do something. It is obvious some people are not capable nor willing to act responsible.
Apr 01, 2017 10:14pm

Steve Lapp
Let me guess, you've never seen high end SUBs or vans with video screens in the back of the headrest to entertain kids and other backseat passengers. No streaming Netflix for them huh? How about full size motorhomes? No laying in bed and playing on Facebook. Cops claim that they are allowed to text while drivingbbecause they have "special training", someone better offer that training to the general public cause texting is here to stay. Pass all the laws you like, won't stop it.
Apr 01, 2017 8:06am

James Collier Jr.
i agree on your point about cops texting while driving. But video screens in the back of headrests? Laying in bed and playing on FB? What's your point there? Those don't necessarily distract the driver unless they allow it to distract them.
Apr 01, 2017 9:12am

Heather Strickland
He did it...sorry bout his luck...12 lives gone cause he is ignorant...hang him...he knew he was doing wrong...and did it anyway...make him an example instead of slapping him on the wrist...everyone sees...show everyone that you don't have that right to take people lives....you knew it was wrong you did it anyway.
Apr 01, 2017 3:46pm

Fernando Ubarr
if you put cameras on both sides of the truck and record everything, you will see many truckers texting, watching videos on their phones mounted on the dashboard, looking at maps, writing down something, trying to pick up something from the floor, same thing with BUS drivers!
Apr 01, 2017 7:24am

Victor Collins
Same thing with all drivers and humans! So why do you only point fingers at commercial drivers?
Apr 01, 2017 8:48am

James Collier Jr.
And 9 out of 10 powerpussies and man-ginas are staring down at their phone as they passed my 40-ton truck, just before they cut it off with inches to spare.
Apr 01, 2017 11:11am

Cody Blankenship
Yeah I've been guilty of looking at my phone and writing something down while I drive.. I run a business.. On the fly.. I also have 20 years and over 1.5 million miles without an accident.. 12 years OTR hauling oversize and livestock..
Apr 01, 2017 11:15am

Fernando Ubarr
Victor Collins why do I point fingers? because we as truckers and bus drivers SHOULD set an example to the rest of people, if you are a "professional driver",there is NO reason why to do any stuff while driving, but I see most of you are just shit, and when something happens because you were distracted, then you are crying and blaming the other driver, you are the ones who are against E-logs, cameras recording you while driving, and all those things, keep messing up, but not with my truck because you will be recorded on my cameras and used it against you!
Apr 01, 2017 2:23pm

Aaron S Caldwell
Been through that area many times! Very baron out there! Need to pay 100% attention always!!! Sad situation all around. BLESSINGS and LOVE,driiiiivers
Apr 01, 2017 10:35am

Cody Blankenship
I've made that trip many times heading to crystal city or to uvalde to pick up livestock.. I barely get a cell signal thru much of that between 10 and uvalde..
Apr 01, 2017 11:17am

Cody Blankenship
It is a sketchy stretch of road..went thru one night and a tree had fallen halfway across the road.. Then the deer.. You gotta watch out..
Apr 01, 2017 11:18am

Ray Lubinski
Even worse yet, a young couple called and reported the driver driving erratically and the report was ignored, that was 15 minutes before the accident occurred
Apr 01, 2017 4:30pm

Ray Daugherty
Such a tragedy I would hate to have to live with that, prayers for all the families & the young man who caused the accident
Apr 01, 2017 9:30am

Justin Hoke
I personally hope that the guilt of killing 13 people drives that pathetic excuse for a human to commit suicide. Knowing that because he HAD TO SEND A TEXT...he killed 13 people. I hope it weighs on his mind so much that he kills himself.
Apr 01, 2017 10:34am

Justin Hoke
Trying to shift the blame are we? Must be a fuckin liberal. ITS NOT THE PHONES FAULT! ITS NOBODY ELSES FAULT EXCEPT THE SELFISH YOUNG MAN!!!!
Apr 01, 2017 10:35am

Cody Blankenship
I travel that stretch quite a bit.. It is a little sketchy in spots anyways.. Time to get something done with 4 wheelers on the phone..
Apr 01, 2017 11:11am

Justin Hoke
Anything less then 12 counts of first degree murder and being put to death is an injustice
Apr 01, 2017 2:10am

James Collier Jr.
No, I say give him thirteen life sentences to think about what he's done, and let this haunt him every day.
Apr 01, 2017 2:38am

Justin Hoke
James Collier Jr. til people start being put to death for killing others while texting and driving...it wont stop. And even then, its questionable whether it will or not.
Apr 01, 2017 2:42am

Keith Mcneely
Justin Hoke The death penalty penalty is somewhat of a joke. He will sit in prison just to be tried. Then sit ( many ) years because he will have his appeals and sit some more. Then he'll get a date, but normally it's years down the road. I say either give him life or pull the trigger. No waiting game.
Apr 01, 2017 4:15am

Justin Hoke
Keith Mcneely Sadly, you are right. It really should be KOS (Kill On Sight). Useless assholes like the pickup driver dont deserve to live another second!
Apr 01, 2017 10:24am

Gail Ann Travis
Prayers and condolences for the families. May God test the souls of those killed. So senseless and sad
Apr 01, 2017 5:30am

Justin Hoke
If you really want to get a feel for how STUPID and SELFISH liberals are....read Victor Collins comments...
Apr 01, 2017 10:38am

Mike Rogers
Todays bad behaviour by too many of our citizens young and old. There are consequences people
Apr 01, 2017 5:34pm

Sally Wuestenberg
An awful tragedy. Prayers to the families of the victims.
Apr 01, 2017 2:27pm

Victor Collins
Why? Did he intentionally attempt to kill those people? I don't think so, but what the hell, anytime someone is dead, just kill all the people involved! That is what you're saying, correct?
Apr 01, 2017 8:58am

Justin Hoke
Victor Collins Why? Yes he did intentionally do it. HE WAS TEXTING ON HIS PHONE YOU FUCKING MENTALLY RETARDED DUMBASS!!!!
Apr 01, 2017 10:36am

Justin Hoke
Victor Collins IF HE WASNT TEXTING WHILE DRIVING THIS WOULDNT HAVE HAPPENED YOU IGNORANT FUCKING PIECE OF SHIT ILLEGAL
Apr 01, 2017 10:37am