A truck driver is in serious condition after a devastating crash caused his cab to separate from the tractor-trailer and plunge off the Kennedy Expressway in Chicago. 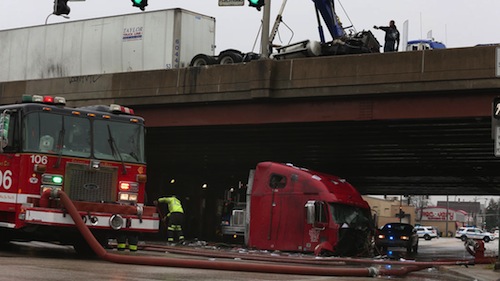 The incident occurred shortly after 8 a.m. Sunday morning on the Kennedy Expressway at the Kimball Avenue overpass, which is a busy street in the Avondale neighborhood of Chicago. Authorities say the truck crashed into the wall of the I-90/Kennedy Expressway and the impact somehow caused the cab portion of the truck to separate from the tractor-trailer unit and then jump the concrete barrier, plunging more than 15 feet onto the street below. The rear of the truck was left dangling over the ledge. 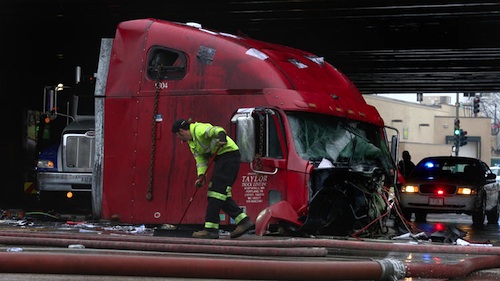 Thankfully a few fast acting witnesses immediately ran to the driver’s aid and pulled him out of the cab. They stayed with him doing what they could until paramedics arrived minutes later and rushed him to Illinois Masonic Medical Center. George Tofan was driving along the Expressway with his son when they say they saw the accident unfold. “I never see something like this," Tofan said. "I was worried about the guy that was in the truck." While the driver’s name has not yet been released, he was last reported to be in serious-to-critical condition but is he is expected to survive the accident. 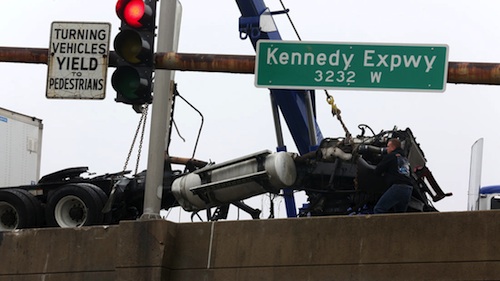 The trailer was left blocking several lanes on the Expressway and traffic was backed up for hours as crews performed the difficult job of clearing the wreckage from the overpass and the street below. First responders also issued a precautionary HazMat and spent several hours hosing down the site to wash away diesel fuel that had spilled from the truck. Cranes were also called in to lift the mangled cab from the street.

Illinois State Police is conducting an ongoing investigation to determine what exactly caused the truck to crash into the wall. While there has been speculation that the driver may have been dozing off, no official cause has been given as of yet and the trucking has not released the driver's identity or driving record to the media. The truck driver was employed by Taylor Truck Line, based in Minnesota. According to the Federal Motor Carrier Safety Administration, the company’s safety record indicates that it has been involved in 29 crashes, with 2 fatalities and a dozen injuries over the last two years. The company says it will not comment on the incident during the ongoing investigation and has only issued a statement on its website:

"Our concern is not only for the employees of Taylor Truck Line, but also the safety of the public that we come in contact with on a daily basis."

John King
You can tell the haters!! Already condemned the company!! All trucks speed thru Chicago. You ever get behind a city Truck 50 MPH I spent 20 years in Chicago. You sound like someone that couldn't make on are world!!!
Mar 28, 2017 6:01am

Shirley Dale High
Most truckers do speed though Chicago. I don't know about city trucks. Just what I see going though there. Just hope this guy recovers.
Mar 28, 2017 6:34pm

Ronald Wilson
All trucks that speed through Chicago, are a major problem. "Hater's???" That's a good one. Call it the way I've seen it in my lifetime of driving there. I've been a Chicago Rail Yard Container driver in the past, and hauled enough loads in, out, and through there to qualify. If you drive a truck faster than the posted speed limit, then you too are a problematic driver playing Russian Roulette. I've seen enough wrecks there as they were happening to know "driving too fast for conditions" is not safe. Before condemning me for my thoughts, I've been running in the Chicago area for over 40 year's, starting there as a U. S. Mail Carrier!
Mar 29, 2017 1:19am

Ronald Wilson
As for both of you, John King and John Hanks, your comments are considered as par for a lot of driver's out there today, that either they don't have the proper Safe Driving Training or Etiquette. And if you're a "Trainer" with that attitude, then you are a Major Part of the problems of today's unqualified steering wheel holder's, as they're not being trained by a true professional driver trainer, or they shouldn't be allowed to be a professional driver to begin with. I've trained enough driver's and failed enough if them, that then went on to another Trainer that finally passed them, and within one month were involved in horrific crashes that ended their driving careers, and someone else's career.
Mar 29, 2017 1:35am

Jason Williams
Not ALL driver's speed through Chicago!!! Get your facts right!!! Some of us are still true PROFFESIONELS who don't like being put in the same category as the steering wheel holders!!!!
Mar 29, 2017 2:21am

Victor Collins
Shirley, could you please post your sources for how many trucks speed the Chicago?
Mar 29, 2017 5:12pm

Roy Stewart
Micro sleeps are a sign of fatigue and lack of good sleep. You cannot be a professional trucker and allow this to happen. It's too bad a good driver gets hurt like this. I hope he recovers.
Mar 27, 2017 8:37pm

Buddy DuRand
I am a Retired heavy haul driver , over 48 years hauling heavy Eguipment all of us and Canada, 6 years with Taylor, I do not work in the office, the tongue is quick to condem when Not educated...
Mar 28, 2017 1:31pm

Rob Jalbert
You have so many on here that are quick to judge and blame the company. I would bet not one of you were at the scene when this happened. Well that would mean you really dont have a clue how it happened and shouldnt be running your mouths off about the company till you get the details. Any two year old can sit back and say why something happened but only that driver knows what happened
Mar 29, 2017 5:31am

Richard Smith
The tractor went over or just the cab off the frame? If it was the cab without the frame that seems like something a driver would pick up on during the pretrip inspection. Don't they still do those?
Mar 29, 2017 3:48pm

Victor Collins
First off, what is a "pretrip inspection", I can't find that term in any of the regulations? Ever think just maybe the cab is designed to part ways from the major massive weight of the truck so the driver might be protected?
Mar 29, 2017 5:18pm

Don James Cooper
You serious Victor Collins? Pretrip is to be done everyday before you start your day
Mar 29, 2017 7:07pm

Ronald Wilson
Why are some of us not surprised at this time of the devastating crash? I have feelings for the driver's siituation, but it's not that hard to believe that this Company has had a bad reputation for well intentioned "new drivers". When you are running through Chicago at speeds greater than the posted limits - which are not obeyed by the majority of trucks, by the way, you will find crashes like this inevitable. Taylor Truck Line of Northfield, MN has been going through a lot of people who are not treated fairly as driver's, and their Safety Record - or latest "lacking" Safety Score - speaks volumes.
Mar 28, 2017 5:10am

Bobby Stevenson
Been with companies like that, not treated fair, no home time, run my ass off. Made great money, but cudnt fix trucks right. Ive been out of it, since Dec 2013, cuz my frustrations, n startin drinkin, got arrested. Hope, n time God will get me back under wheel, when Im ready. Its gettin tuff out there, but Trump, might fix Some things, I hope
Mar 28, 2017 6:43am

Keith Conder
The majority if trucks? The majority of traffic period speeds through Chicago. 45MPH on the Dan Ryan through town. You do 45 and you are a sitting duck.
Mar 28, 2017 8:40pm

Ronald Wilson
Keith Conder That's where you are wrong, and another part of the problem; You're justifying unsafe practices as a professional driver.
Mar 29, 2017 1:49am

Victor Collins
Ronald Wilson, you are not a professional driver and I can prove it! The question is do you want me to prove it on Facebook?
Mar 29, 2017 5:23pm

Buddy DuRand
Taylor Truck Line does not have a problem with maintenance on there equipment, they have the best people and the best shop in the world, if there is a problem it gets repaired any where in the U S.
Mar 28, 2017 1:24pm

Buddy DuRand
You have to inspect your equipment, and it takes everyone, driver, Companies, State and Federal DOT,you have to keep them safe, or some one might not make it home,we don't know what happen in this incident let's not be so quick to judge and acert blame...
Mar 28, 2017 4:38pm

Ronald Wilson
They have an "excellent Shop and Maintenance Program" only if the Driver's are an educated and active part of the program.
Mar 29, 2017 1:39am

Ronald Wilson
Buddy DuRand, I see this particular case as a driver not alert enough, and driving too fast for conditions.
Mar 29, 2017 1:41am

Ronald Wilson
Rob Jalbert, I've seen enough in my lifetime, and know the area and traffic conditions in the Crash Area to know enough about driving too fast for conditions. The truck fully loaded, crashing at UNDER the Posted Speed Limit, in the manner of crashing, should not have caused the cab to seperate from the frame.
Mar 29, 2017 8:19am

Victor Collins
Ronald, do you have any idea how trucks are designed today? What holds a cab on the frame?
Mar 29, 2017 5:26pm

Gerald Nulisch Jr.
God be with that driver and his family. Thank you God for having those people there to help him
Mar 28, 2017 4:10pm

Maria Drowns Evans
reading the article it seems that this co has a safety issure with their trucks, they should be held accountable.
Mar 28, 2017 8:05am

Susan Traweek Allen
Thank God was watching over the Trucker and the people in this horrible wreck✝
Mar 29, 2017 9:38pm