If you need another reminder of what can happen when big rigs and high winds meet, check out what was captured on a Wyoming Highway Patrol dash cam last week. (Watch video below)

The video was filmed on February 7, 2017 and WHP have since released it to the public in hopes that it’s a dramatic enough visual to remind drivers to heed those heavy wind warnings. That particular day, wind gusts as high as 90 mph were recorded in the area around Elk Mountain, Wyoming and it was enough to close Interstate 80 to lightweight, high-profile vehicles. But one truck driver chose to ignore the ban warning and decided to proceed with caution, driving at a low speed of 35 mph. 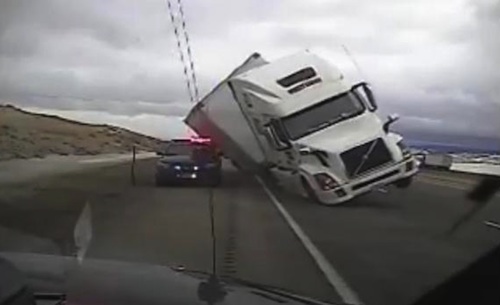 In the meantime, the high winds had already caused multiple accidents along I-80 and three troopers had driven out to the stretch of highway, parked their patrol cars and left their vehicles to do their job of assisting motorists along the road. A rear-facing camera on one of the patrol vehicles happened to capture the moment the semi came along and got caught in a gust of wind. First the wind tips the trailer, which then pulls over the entire rig and it pretty much swallows the patrol car. The truck continued skidding along its side and barely missed the patrol car recording the incident on camera.

"The tractor trailer was traveling at a very reduced speed, 30 to 35 miles per hour. A gust got the trailer and blew it onto the police car," confirmed Lt. David Wagener to the media. 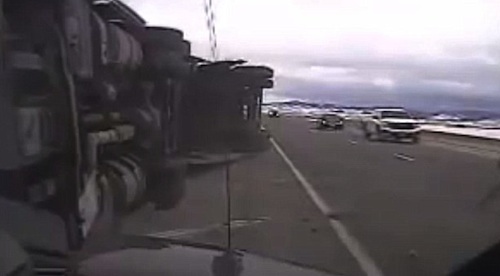 Thankfully, the crushed patrol car was empty at the time and nobody was hurt. Even the truck driver and his passenger managed to survive the incident without any injuries. However, Wagener said the semi driver was cited with a misdemeanor for traveling on a closed section of the interstate and ignoring the posted warnings.

"All we ask is that you please follow high wind advisories and closures when you are traveling in our great state. Even if you plan to travel at reduced speeds. Hopefully this video illustrates why," WHP said.

They video has since gone viral and WHP hope it will serve it's purpose as a strong reminder of why driving in inclement weather puts everyone at risk, not just yourself.

Israel Swanner
Rule of thumb I've observed: Don't bother to roll through an area if the wind speed exceeds your weight in tens of thousands. E.G., if it's blowing at 50mph and your gross weight is 38,000 pounds, don't even risk it. A gust or a direct crosswind will toss you like this video.
Feb 16, 2017 3:11am

Steve Mcintyre
Why would you park your cruiser on the down wind side? Then again I seen WY painting highway lines with a 50mph cross wind. The overspray was on every car and truck as it passed by.
Feb 15, 2017 9:12pm

Patrick J Bogard
I read where the driver was ticketed for ignoring the high wind warnings.
Feb 14, 2017 5:47pm

Noah Townshend
Whether it be the law or not you should get over for emergency vehicles driver's fault
Feb 15, 2017 4:13pm

Darlene Farley
Desarae Farley show this to Adam. We were talking about it last night.
Feb 16, 2017 6:48pm

Mike Sidman
A big fat ticket, and if not terminated from employment, reassigned to the ugliest, most beat-down POS in the fleet, STUPID
Feb 16, 2017 6:19pm

Angie Doster
Either pass them direction wind blowing or stay. 5. Car lenghts behind them. Comon sense
Feb 17, 2017 7:51am