An avalanche obstructed a busy Colorado mountain highway Tuesday, trapping two commercial truck drivers and forcing a road closure that left several other truckers and motorists stranded for hours. Fortunately nobody was hurt and it was actually a dedicated pizza delivery man that made the headlines instead. 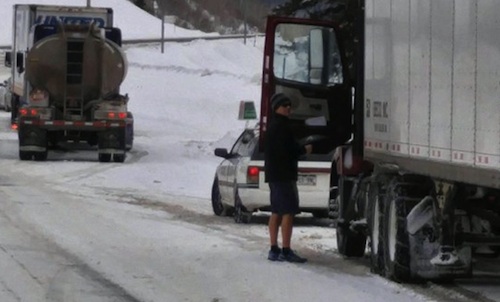 The avalanche occurred early Tuesday morning and dumped approximately 15 feet of snow on to Interstate 70 at Vail Pass, which is a key route to the popular Vail ski resort. According to Mike Lewis, deputy director of the Colorado Department of Transportation, no one was injured in the avalanche but it swept down a tangle of trees and rocks in its path, trapping two commercial trucks and partially burying one. Authorities say the semi truck was carrying mail and fortunately the driver was not hurt. However, the highway was forced to close as CDOT crews cleared the area and worked to mitigate more avalanches across Colorado's high country. Truck drivers making deliveries were delayed for hours along with locals and travelers on their way to the area ski resorts. Several famished truckers decided to give it a shot and see if they could actually get pizzas delivered right to their cab doors. Sure enough, they found a local restaurant willing to make the delivery through the difficult terrain. In fact, Marc Keleske, owner of Chicago Pizza in Vail, wanted to make sure of it, so he drove his Subaru up through the mountains and made the deliveries himself, wearing shorts no less. 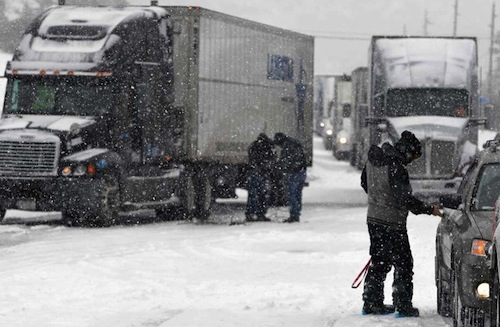 "These guys have been sitting there for anywhere from 10 to 14 hours in their trucks, just sitting there overnight," Marc says. "They’re usually very hungry and they’re very excited to see us when we pull up, that’s for sure."  Marc's wife, Vicki, explains this actually isn’t the first time they’ve taken orders from stranded drivers and they’re willing to go the extra mile(s) for anyone who gets stuck on the road in these conditions. While many restaurants stick to their policy of not delivering anywhere without an actual address, Marc just gets a description of the truck and his determination eventually allows him to track down the customer amongst the rows of vehicles lined along the road.

"They find us, they call us, and ask if we can deliver up there, and we're always a little iffy on it, because if the road is closed it's tough to get up there," he adds. But on Tuesday, Marc was more than determined and after making his first successful delivery, he ending up driving nearly 70 miles back and forth, delivering pizzas to several other stranded drivers with the same idea.

By mid-afternoon, CDOT crews had completed the job of clearing the snow and re-opened the road. Other portions of I-70 and mountain passes were periodically shut down through Tuesday so crews could trigger avalanches to prevent surprise slides. On Wednesday, CDOT officials said that avalanches are still a threat to the area and crews are continuing to prioritize control work around the state.

Israel Swanner
Get someone to edit the article. "Unfortunately, the driver was not hurt" doesn't look too good, although everyone naturally presumes that's not what was meant. It's located right after the description of the avalanche that partially buried the mail truck.
Jan 11, 2017 2:03pm

Trucking Unlimited
Definitely not what was meant and thanks for pointing out the typo. We'll make the correction - thanks.
Jan 11, 2017 7:19pm

Dennis Bergholz
Never know when u need food for a break down or storm or a road closed but glad of that pizza man great job sir i carry old peanut butter and jelly and crackers and tuna fish and a few gals of water to wash up and drink PS JUST DONT LET UR ASS FREEZE IF YOU GOT TO SHIT LOL
Jan 13, 2017 6:46am

Marvin Barnhill
should have enough food in that truck to last a week and water
Jan 12, 2017 4:47pm

Jeff Johnson
I've left the house for a quick day trip with no food in the truck before. Sometimes stuff just happens.
Jan 11, 2017 10:45pm

CA Husted
I suppose I missed the section that tells of drivers who've run out of supplies. Maybe, the drivers merely wanted pizza and short conversation in person, rather than radio.
Jan 11, 2017 11:00pm

Deacon Paul
Jerry, I drove for several years and believe it or not some companies are starting to ban frigs, corded coolers and microwaves. Safety BS.
Jan 12, 2017 8:34am

Jerry Jondahl
Always had a cooler. Bread and PBJ always. Drove flatbed could get into construction sites with nothing around. Times are different I guess
Jan 13, 2017 6:25am

Dana Regan
Avalanche was between exits..CDOT held them up while cleanup went on. Pretty sure trying to drive down those 2 lane roads away from I-70 is not what you want to do..so yea..stranded is appropriate terminolgy
Jan 14, 2017 11:20am

Kirk Righetti
Dana Regan what I was getting at was if it was hazardous situation why did they let the pizza guy in. If it was cleared up why could driver just drive out of area...was point I was getting at...but I digress
Jan 14, 2017 11:58am

Maura MamaLemur Michaelson
"Authorities say the semi truck was carrying mail and unfortunately the driver was not hurt.".... Someone needed to proof this story...
Jan 11, 2017 8:19pm

Gregga Trott
Jana Ritter who is edits this stuff? Did you want the driver hurt? Department of Transportation, no one was injured in the avalanche but it swept down a tangle of trees and rocks in its path, trapping two commercial trucks and partially burying one. Authorities say the semi truck was carrying mail and unfortunately the driver was not hurt.
Jan 12, 2017 5:16am