Propane truck driver, Owen Dailey is being hailed a hero for taking quick action just moments after being thrown in the air from an explosion at a propane supply company on Vashon Island, Wash. Although he suffered second and third burns, the truck driver says he’s just lucky to be alive. “I feel sad and happy. I'm alive and I have good spirits," he told media from his hospital bed on Saturday evening.

“He's got quite of burns to his face, to his neck, his leg. Definitely, it's pretty scary looking, but he's going to be OK,” said Dailey’s wife, Michal. It had been a regular day on the job when Dailey, a propane truck driver for Vashon Energy, was at the company’s location at 20317 Vashon Highway Southwest and had detected something was wrong just moments before the explosion. His wife says that he remembers smelling gas fumes in the building and then noticed a faulty nozzle on a delivery hose. But before he could do anything about it, an explosion rocked the building and threw Dailey nearly 8 feet in the air. 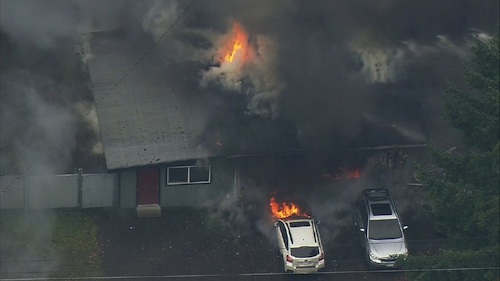 Kids passing by just moments after the explosion captured Dailey in action on their cell phone. He came running out of the flaming building and quickly moved two nearby propane trucks to avoid more explosions. The witnesses said it was like watching Captain America in action. “I can't first of all imagine surviving an explosion and then getting up and moving two trucks out of the way,” Michal says. “The emergency brake was on. So, he said he just punched the gas hoping he could get the truck away from the building and then he ran over and moved the other truck out of the way,” she explains. Witnesses also said there were other Good Samaritans who happened to be passing by and bravely went into the building to try and help employees escape.

At around 12:30 pm, 911 dispatchers received calls about the explosion and when fire crews arrived on the scene the building and two cars parked in the lot were already engulfed in flames. "There was heavy black smoke, a lot of fire, there were a lot of minor explosions, propane tank type explosions," said Bob Larsen, Vashon Island Fire and Rescue's interim Chief. With the employees already evacuated from the building, the firefighters next main concern was a 12,000-gallon propane tank just outside of the building. While it’s unclear if the massive tank did have propane in it, crews kept a heavy water line on the tank and on the building as smaller tanks continued exploding inside. 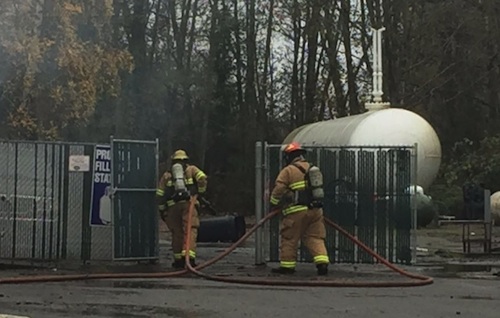 After about 90 minutes, firefighters were able to get the fire fully under control. Fortunately, everyone survived the ordeal but Dailey was airlifted to hospital with third degree burns and two other employees were treated for minor injuries. The building was a total loss. Michal says she is still in shock knowing what her husband went through and amazed that he actually survived. “I feel blessed to have a husband still.”

Tami Spurrier
What a blessing he survived and had his wits enough about him to prevent any further injury to responders and others in the area
Dec 06, 2016 8:13am

Holly Carrier
What a beautiful human being to think about everyone else an their safety an saving 2 other trucks.. It's probably what kept the pain away cuz apparently that adrenaline was seriously kickin.. Get well quickly an thank you for your bravery..!!
Dec 06, 2016 9:55pm