Police Seek Witnesses Of I-96 Crash That Killed Truck Driver


Police are seeking help from anyone who may have witnessed a semi-truck crash that occurred early Tuesday morning at around 1:20 am on I-96 just east of Muskegon County, Michigan. The truck driver was found dead after his semi rolled over and it is still not certain what caused the crash. Anyone with information is asked to call the Fruitport Township Police Department at (231) 865-8477. 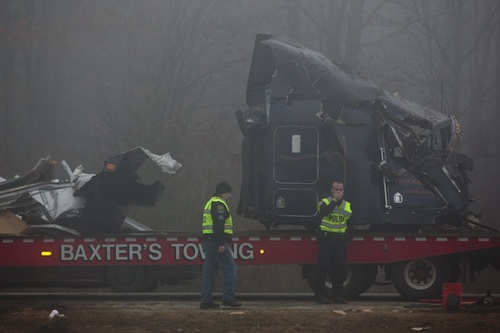 On Tuesday evening, authorities released the name of the truck driver who died as a result of the tragic crash after his family was notified. The victim was identified as 50-year-old Aaron Mather who lived in the Fruitport area and was driving a semi-truck belonging to a local company, whose name has not yet been confirmed. It is believed that Mather was employed by the company and had simply been doing his job when the tragic accident took his life.

While the exact cause of the crash is still being investigated, authorities speculate that foggy conditions may have been a possible factor. What they do know is that Mather was heading east on I-96 between Muskegon and Fruitport when his semi-truck rolled into the center median between the Hile and Airline roads exits. According to Brian Michelli, director of public safety for Fruitport Township, a passing motorist reported the crash around 1:25 a.m. Michelli said the witness did not provide any details about the events of crash, and that he isn’t sure why no one stopped at the scene to assist the driver or wait for help to arrive. 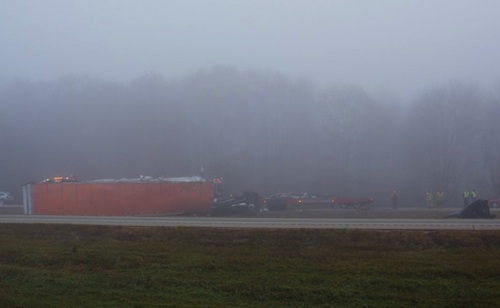 Unfortunately when the first responders arrived on the scene, they found Mather already dead inside the mangled semi-truck. One westbound lane of the freeway was closed for several hours while police investigated and crews worked to remove the contents of the semi and remove the vehicle from the median. All lanes were reported open by 11:15 a.m. Tuesday morning.

Jason Everhart
I wasn't a witness but did drive by it. It was foggy!! Maybe a quarter mile visibility at best. Looked to me that the driver simply missed a curve in the road, ditched it and rolled over. From the damage it looked as if he must've been going too fast for the visibility conditions also.
Nov 17, 2016 2:04am

Trucking Unlimited
Thanks for sharing that and sounds like an accurate assessment!
Nov 17, 2016 9:42pm

Sharon Kalbfliesh
My Condolences to his family and friends..My prayers are with you all.
Nov 18, 2016 4:35am

Jeffery Longcore
I'm gonna say yes. Only speculation but I live in lower Michigan and I know we have been getting some nasty fog in the morning and in the evenings. Hope they get closer and it's completely sad and pathetic that people just drive by and don't stop to offer help.
Nov 16, 2016 8:19pm

Sheila Johnson Crowley
We are in lower MI also, some guy passed my son, who was going the speed limit, got ahead of him and slammed on his breaks, so many idiots on the road. sheesh
Nov 16, 2016 8:20pm

Ray Taylor
Justin Hoke that's good keep your ass out of Michigan we don't want people like you here in are state or in America.....your part of the problem in this world
Nov 18, 2016 3:02pm

Sheila Johnson Crowley
Ray Taylor I would agree with your comment about Justin and tell him to stick his confederate flag up his as*. What a jerk, you can tell he is a flat lander.
Nov 18, 2016 3:08pm

Software Scripts
Absolutely love anything about
Nov 17, 2016 2:00am

Justin Hoke
I was a witness to a non fatal truck accident... biggest nightmare of my life. I will never do that again. Both sides called me at least 20 times asking the same questions, had 4 court hearings, 4 depositions. Fuck that non sense, never again.
Nov 17, 2016 1:45am

Bret Stephan
Yep, you try and help by doing the right thing and you completely screw yourself by getting sucked into the system
Nov 17, 2016 11:45am