According to the US job site Glassdoor.com, truck driver wages increased the most over the last year out of 60 common professions compared. In fact, since last October trucking wages were found to have grown by a whopping 7.8%, which is far more than the overall 2.8% wage growth for all jobs. "We have a booming economy, we're seven years into the expansion and truck drivers are the front line," explains Andrew Chamberlain, chief economist at Glassdoor. 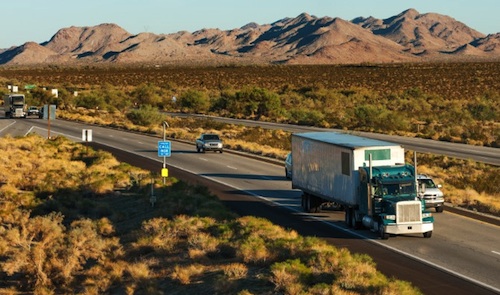 While the overall pay for truck drivers certainly varies by the type of job, distance and employer, the estimated median pay for long haul drivers is at $54,000 per year and according to the American Trucking Association those working for a private fleet can earn up to $73,000 a year. If you compare that to the average salaries for other trade professions such as machine operators at $36,800, construction workers at $36,600 and maintenance workers at $41,179, it appears that long hauling is still the way to go for those who don’t mind the lifestyle.

Of course, the lifestyle factor is actually one of the biggest reasons trucking companies are having more difficulty in recruiting and retaining truck drivers, especially now that work-life balance is becoming a lot more important to Americans. Therefore, it’s no surprise that employers are continuing to offer higher and higher wages as more accumulating factors keep driving up the competition for recruiting new talent. According to the ATA, even in the last few years the overall truck driver shortage has grown from 30,000 drivers in 2013 to a shortage of nearly 50,000 drivers today. Industry experts also say it’s becoming more difficult to bring in younger drivers because of the work schedule demands. Chamberlain also says that with the overall US unemployment currently at a low 5%, trucking companies are even more hard pressed to find new and qualified drivers. "That's going to force companies to hike up wages to get the employees they need," he says.

And despite the recent headlines about autonomous trucks ultimately replacing truck drivers in the future, economists such as Chamberlain say that isn’t going to happen any time soon. Many argue that since the job actually involves more than just driving a truck, it isn’t something that a robot will be able to easily replace. Not to mention that with the economy growing over the last seven years, there continues to be a ton of goods that need to be transported, which is another reason that truck driver wages are going up.

Kirk Righetti
Ok 'm calling BS...being that if you combine everything we do with the time we do it in, times what we make....Ladies and Gentleman that are bitching about working for minimum wage, we wish we were making minimum wage. Next time y'all scream for $15 an hour. try working about 4 hours of your shift at work for free. Think about that, and plus you miss your kids growing up, your anniversary, birthdays, family events...So next time y'all think about posting this type of thing, might want to actually find out what trucking entitles.
Nov 05, 2016 3:43pm

Kirk Righetti
Honestly the issue isn't the job, its the companies that are flooding this industry with individuals that are promised (lied to) in making a living. Probably 10 years ago that's true, now you need a second income. Most drivers now are steering wheel holders, don't know any better. I am old school, so yea lil biased. But I see my area goin away and the new irresponsible area taking over. Meaning there is no respect...for road and other drivers.
Nov 05, 2016 3:58pm

Stacey Wright
I would like your comment but that doesn't really say how much I like what you just said so I'm just gonna give you a big fuck yeah
Nov 05, 2016 5:09pm

Andy Turner
It's an increase compared to what we got before. We will never be paid for everything we do so bringing it up is nothing less than a waste of time and energy.
Nov 06, 2016 8:55am

Andy Turner
Besides I don't know anyone making minimum wage who is taking home a grand a week, and the reason is because your math is way off.
Nov 06, 2016 8:57am

Andy Turner
We are still categorized under unskilled labor, therefore coming into this business expecting make a fortune is a pipe dream and always will be.
Nov 06, 2016 9:02am

Kirk Righetti
Ok I'll explain it to you since either your not a driver or something. If you have a local job, manufacturing, production, service you get paid for your time...clock in clock out. The company pays for everything you do. In the industry of truck driving, there are many aspects of trucking you don't get paid fully for ie tarping for flat bed for example. Your are correct in that we get paid for driving. But how many jobs do you work 70 hours a week an no over time. If you take truck driving compared to other industries...you have to figure 40 hrs for trucking. Meaning you work 30 hours pretty much free, you don't see your family much, miss events. So tell me how you feel trucking makes more than minimum wage???? Go head I'm listening
Nov 06, 2016 9:06am

Kirk Righetti
Andy Turner where you getting that we are unskilled labor. Last I checked you take tests to.get your certification (cdl), you have endorcements (air bag, brakes...combo). Do you know the definition of "skilled labor" is. We are in the same catagory as law enforcement...just different subheading...
Nov 06, 2016 9:08am

Michael Kordi
Some O/Os,and lease purchase drivers,are allegedly claiming to bring home between 120k and 200k a year. LOL. They are claiming thats net. Not gross. And whoever isn't bringing home that much is a "steering wheel holder" or whatever.
Nov 06, 2016 8:29pm

Kirk Righetti
I have held long haul truck jobs that I did make that range of pay...that trucking job was specialty hauling. Most jobs are your typical dry box, refer...as well as half the flat bed hauling. These positions are the low paying jobs, the least skilled. Basically the trucks that mostly driving. The jobs that make upwards of 120k low range. So yes there are driving jobs that do make that. These companies are mostly O/O and don't advertise. Companies that advertise are bottom feeders, the more the advertise the lower the company is on the ladder...
Nov 06, 2016 9:17pm

Kirk Righetti
Mike Van Der Mallie to get where I'm tryin to get to take time and the right experience. I'm not goin for low end 80k...I'm goin for 6 figure hauling...don't have to work year round can see your daily more. Have a life and earn enough to rerire
Nov 07, 2016 2:24pm

Kirk Righetti
The dad part is that drivers in the transport industry have always been classified as unskilled, being that no college degree to carry the job. It's why wages are so low.
Nov 07, 2016 7:16pm

Kirk Righetti
Apparently the labor force executives do consider a long haul truck driver an unskilled force...that's sad, I will expect to get refunded for my lisense, and all other expense I have to pay for my job...since you consider our job as unskilled...ur disgusting
Nov 06, 2016 7:17pm

Ronald Hill
Pay increase where the hell is it not in my paychecks food goes up along with gas clothes ECT pay isn't how the hell are we supposed to live feed off the government hell no I'm not these people believe their own damn lies
Nov 06, 2016 1:32am

Sim Taylor
Yeah well when everybody is on electronic log and they govern the trucks down, the money has to go up. Nobody is going to work for less. Mileage money may go up, but with your speed limited and big brother watching you your miles will go down. Money goes up but miles go down. Big deal
Nov 06, 2016 9:00am

PJ Heinz
It's false articles like these that sucker the unsuspecting idiots into this business with delusions of grandeur and wealth beyond their wildest dreams. Then reality sets in...
Nov 07, 2016 7:34am

Tony Hanson
How about zero increase in over ten years all the while enduring ridiculously high fuel, maintenance and equipment cost increases! The pay and rates are 40% behind where they should be for the cost and sacrifice!
Nov 07, 2016 1:09pm

Thomas J. Seidel
They just ended wagelock pay where I work, to me that means we have too many drivers and they're trying to get some to quit
Nov 05, 2016 7:03pm

Phil Killerlain
What increases there have been really did not cover the cost rises in everything drivers and owners use ! Scales 11 dollars where 3 dollars ! Tolls what was 14 dollars to cross IN something like 40 now ! Try eating at a truck stop restaurant hamburger 10 dollars with a drink ? Where they still have buffets 14 dollars where they where 7 dollars ! All of this in the past 9 years ! And drivers got 10 cents a mile ? Owners have had to eat it !
Nov 06, 2016 12:08pm

Jeffrey Smith
Companys are trying to pay owner operators the same rate they did 15 years ago! Total BS
Nov 05, 2016 8:54pm

Jeff Flippins
I certainly didnt have a wage increase, as a matter of fact i have seen the rates go down for the past year.. we sure could use a wage increase though.
Nov 06, 2016 3:39pm

Matt Pimental
Couldn't pay enuff to go back out there! I'll stay up in tbe north Maine woods moving equipment
Nov 08, 2016 3:27am

James R Maxwell
Someone didn't do their homework. While a steaming pile of shizzzz
Nov 06, 2016 4:30am

Justin Bozek
Lol according to the website space aliens are coming to take over the world. That's about as believable as truck drivers getting a pay raise
Nov 05, 2016 7:51pm

Kris Carter
To all you people bitching about the conditions of trucking, QUIT YOUR JOB THEN.
Nov 06, 2016 8:40am

Cody Blankenship
You haven't been in the trucking industry long enough to know that's just what drivers do.. Piss and moan.. And get back in the truck and go to work..
Nov 06, 2016 1:52pm

Kris Carter
I drove an entire recession to know how companies and the dot are willing to treat drivers. I got sick of it 7 years later and walked.
Nov 06, 2016 8:53pm

Steve Mcintyre
44% of all jobs in the US are involved in transportation but I think whoever wrote this was either smoking or dreaming.
Nov 06, 2016 4:51pm

Sonny Larson
If you're bitching about your paycheck it's no one's fault but your own! Find a company where you can make the amount of money you think you're worth!
Nov 07, 2016 6:32am

Dean Lane
The reality is, this is bs. Otr drivers are the most taken advantage of by their own industry. No ot, no perdiem, no pay when sitting, no paid or day off for holidays. No sympathy if you aren't down with that. Otr drivers should strike for 48 hours. No trucks move until they are balanced between pay to life time measure to as well as for the responsibility involved with each safety aspect. When the truck breaks, drivers money stops coming in yet must go out to survive. Dot cooperation, online tests, pap er rwork. Route troubleshooting. All part of the job that is virtually non paid. Unloading, loading, attending the process 0$ on the payday. No ot is complete bs.
Nov 08, 2016 11:26am

Sean Lindstedt
This add is to notice new drivers thinking about get ing in
Nov 06, 2016 2:10pm

Dean Lane
My company thinks I'm being unreasonable becsuse I am going to be home for thsnksgiving against their authority. I have a problem with that. I'll be home for roving regardless.
Nov 13, 2016 6:33am

Samuel Lee
Article is "sucker bait" and a "lure" for flunkies that make people who know this business furious.
Nov 07, 2016 5:33am