Well according to Uber, the future of trucking has arrived. On Tuesday, Uber’s autonomous vehicle company, Otto, made the first commercial delivery using a self-driving truck. The company announced the truck drove 120-miles along Interstate 25 from Fort Collins to Colorado Springs, and successfully completed its first mission of delivering 2,000 cases of Budweiser beer. 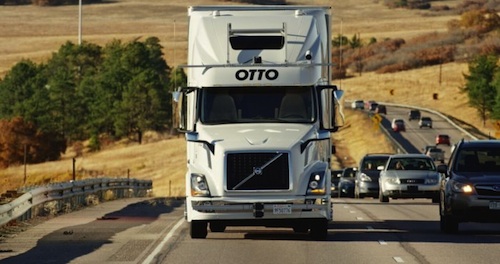 Over the last few years, Uber has been seeing beyond it’s huge success of singlehandedly changing the taxi cab business and predicting a future where not only can passengers be taken to their destination in self-driving cars but also that self-driving trucks would ultimately change the commercial trucking industry as well. Not surprisingly, the idea that robots would potentially take over human truck drivers and be able to perform all the ins and outs of the job has been a huge subject of controversy. However, last August Uber went ahead and acquired Otto, (a San Francisco start-up run by a number of veterans of Google’s long-running autonomous vehicle research program.)

While the mission itself was more of a test-drive and a driver was on board the entire time, the company says that no human intervention was needed and that the technology has proven to work well. “We think this technology is inching closer to commercial availability,” said Otto co-founder Lior Ron. “We’ve tested with trailers, of course, but there’s nothing like actually doing the real thing, end to end,” Ron said. Otto also says that while this week’s trip proved that the self-driving truck could drive in regular traffic alongside passenger vehicles without incident, the company plans to expand the pilot program and test for more types of road and weather conditions, which are major factors in autonomous vehicle route plotting.

While Uber’s goal is to become an enormous global transportation network moving pretty much anything from people to hot meals to goods in countries all over the world at all hours of the day, CEO Travis Kalanick says that he sees the future of commercial transportation using both manned and unmanned vehicles. The American Trucking Association estimated the annual trucking industry revenue topped $720 billion in 2015 and a good chunk of that total came from major companies that rely heavily on the trucking industry to transport their goods. Anheuser-Busch, which owns Budweiser, is a good example as it delivers more than a million truckloads of beer every year in the US. “We view self-driving trucks as the future, and we want to be a part of that,” said James Sembrot, senior director of logistics strategy at Anheuser-Busch.

Doyle York
They already have robots that bring the beer from the warehouse to the loading dock in some Budweiser warehouses. Have had them for several years already.
Oct 27, 2016 3:14pm

Gary Steffan
They don't have all the infustructure in place we can build that for money.
Oct 29, 2016 4:03pm

David Vaughan
They can't even get half the sensors on the computer engines to work right now. this will probably turn into a disaster.let's try it out on the BQE
Oct 27, 2016 5:22pm

Allen Fleming
A disaster waiting to happen, their putting faith on computers....what happens when the computer crashes....oh, we'll cross that bridge when we get to it...
Oct 27, 2016 8:45am

Ron Wike
Airplanes have been relying on autopilot and navigation for decades now
Oct 28, 2016 2:32pm

Brad Zeigler
There ain't much traffic up there. That's why pilots HOS regs are much looser than truck drivers.
Oct 29, 2016 5:45am

John Metz
Wwe have all driven in weather and conditions that no robot could with wrong directions and yards one can't explain. will a robot know where to go and when? we listen to the CB to determine that, this is a future for disaster and I have yet to see a vehicle do a comprehensive VI on itself.
Oct 28, 2016 1:26pm

Jeff Spica
Quite obviously it's not intended for the conditions you envision.
Oct 29, 2016 11:30am

William Vinet
They keep saying truck drivers will be like airline pilots but they're just trying to look at ways to save money and take more of our jobs away
Oct 27, 2016 9:56am

Micky Conard
Just another way for a company to shaft the drivers, 'Cause you know if you ain't driving the miles they sure won't pay you for them!
Oct 28, 2016 5:54pm

Michael Baio
What's going to happen when the guy controlling it quits because he doesn't make enough money? I mean really? How much are you worth sitting there doing nothing?
Oct 28, 2016 3:05pm

Wayne Leavitt
Throw a little mag chloride on the sensors- then we'll see that this is just a fluke designed to drive down wages.
Oct 27, 2016 3:49pm

John Hamblin
I want to see that truck do a drop and hook all by its self that should be interesting
Oct 27, 2016 3:10pm

Mark Marc Marq
Would be funny if someone drove past & gave the driver a friendly wave. Then they shit themselves & sped up
Oct 27, 2016 12:27pm

William Decker
Don't like speed limiters? Don't want an ELD? Don't like the idea of a sleep study? Meet your replacement.
Oct 28, 2016 8:40pm

Kirk Righetti
Won't be safer, but there again everyone hates truckers so I'm sure everyone is celebrating
Oct 27, 2016 3:06am

Torreon Square Watson
If Hillary Clinton get office it will be regulations put on it
Oct 28, 2016 4:39am

James R Maxwell
Who will the security and shipping/receiving personnel have to harass? These breweries have cheap freight and too many rules anyway.
Oct 27, 2016 3:11am

Kirk Righetti
Question...how will it check into shipper amd recievers, tarp loads, secure loads. Driving is only quarter of what a trucker does. How will it call for a wrecker, refuel....
Oct 27, 2016 3:06am

Beth Howells
your cars do tons stuff for you now good ole sri can speak whats needed
Oct 27, 2016 6:36am

Kirk Righetti
Lol last checked I have to put gas in it, check fluids, play with the steering wheel. All my truck does is basically entertain me...lol
Oct 27, 2016 6:48am

Rick Turner
Beth Howells yes the other day I asked sri about how to keep my dog from shedding, guess what sri thought I said
Oct 28, 2016 12:01pm

Chuck Kelly
Yep This will replace alot. Of driver issues. I'm not cheering for it . But it was bound to happen. With Companies needing drivers. An the driver force getting smaller. Puter driven trucks my be the only other answer.
Oct 29, 2016 11:44am

Rusty Evans
That means u will be rich one day when one of these piece of shit trucks run into me or my family 👍. So they to run that truck up their ass and burn it!
Oct 27, 2016 6:16pm

Ed Santos
Thank you Anheuser-Busch for endorsing and aiding and abetting the death of the trucking industry. This Bud's for you.
Oct 28, 2016 9:52am