A botched drug smuggling attempt has landed a California truck driver behind bars in Indiana. His error was thinking that covering bags of marijuana with mustard would mask the odor, but instead the overpowering odor of mustard is what actually attracted the state trooper’s attention. 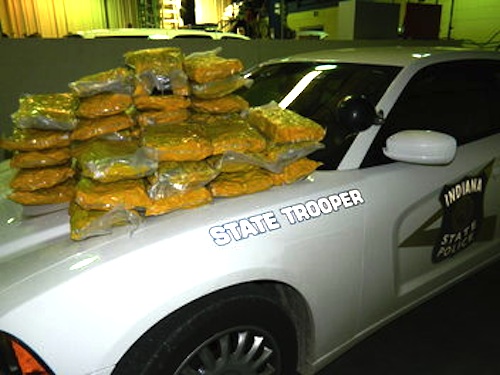 The incident occurred on Thursday evening when 52-year-old Richard Sherman of El Cajon, California was on a regular delivery job, hauling television parts to Pennsylvania. He was heading east on I-70 and passing through Putnam County when a State Police Commercial Vehicle Enforcement Trooper stopped the semi-truck for a routine inspection. According to Indiana State Police, the trooper had started a conversation with Sherman and they were having a casual exchange when the overpowering smell of mustard caught his attention. He then saw what appeared to be yellow mustard coming from the cab of the truck and police said there were also other indicators of possible criminal activity (although they did not clarify what), which convinced the trooper to search the truck.

It didn’t take long before the trooper found 36 individual packages of high-grade marijuana covered in bright yellow mustard. The were weighed individually and ranged from approximately 1.25 pounds to 1.50 pounds each, which totaled 48 pounds with an estimated street value of $200,000. Sherman was immediately arrested at the scene and has been charged with dealing marijuana over 10 pounds, which is a level 5 felony.

State police say they are fully aware that Indiana’s interstates are a constant pipeline used for illegal drug trafficking and it’s a common practice for the drugs to be hidden amongst all types of goods delivered by commercial trucks. “There’s no limit except the crooks own imagination for how they try to disguise the drugs they’re trafficking,” said ISP Capt. Dave Bursten. According to police, last year alone their undercover units seized more than 500 pounds of cocaine, 66 pounds of heroin, 165 pounds of meth and more than 2,400 pounds of marijuana. But they also admit the actual amounts of drugs being transported through the state is much higher and even with regular road patrols it's impossible to catch everyone.

Bursten says they will continue increasing their efforts but as long as there is a demand for illegal drugs, the deliveries and creative tactics like the mustard-covered weed will also continue. “It’s a societal issue. When people do these drugs, they are supporting the drug trafficker,” he says.

Phil Killerlain
It's like prostitution as long as there is a demand there will be a supply ! I don't condone drug use but these are useless laws that are filling up the jails and court systems with people that are willing participants ! Law enforcement should be placed more on thefts and killings ! And if people kill themselves using drugs well just hope they had burial insurance , so the tax payers do not have to foot the cost of stupidity !
Oct 01, 2016 2:51pm

Ernie Campbell
Good job another worthless pos out of my profession.
Oct 01, 2016 4:28am

Martha O'Brien
Seriously, we need to stop asking how stupid can some people be?? I think they're seeing it as a challenge....lololol
Oct 02, 2016 9:29am

Beth Howells
let see coffee ,walnuts nothing is stopping a drug dog from smelling stuff .reason the idiot tried this all others have failed .
Oct 01, 2016 7:09am

Dwayne Pritchard
He should have thought about it before doing it
Oct 03, 2016 4:21am