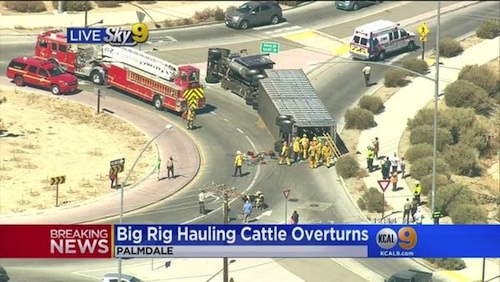 The crash occurred near 47th Street East and Palmdale Boulevard in Palmdale CA, north of Los Angeles. Shortly before 11:20 am, the truck driver was approaching a roundabout and while it is still unclear what caused the driver to lose control, the semi-truck flipped onto its side with the cattle left helpless to brace the fall. Los Angeles County firefighters, sheriff’s deputies, animal control workers and even a few local ranch hands descended on the scene and worked together trying to rescue the animals from the trailer one by one and keep them calm.

“They’re trying to wrangle up the cows so everything can go back to normal,” said Deputy Orlando Martinez with the Los Angeles County Sheriff’s Department’s Palmdale Station. Authorities also built a makeshift pen out of pieces of fencing along the roadway to herd the cattle and a veterinarian also came to determine the cattle damage. Unfortunately some of the animals were killed by the crash and several were left injured. Animal rights activists also showed up on the scene and expressed their outrage for the fallen animals. Fortunately the truck driver was uninjured, and no other vehicles were involved. 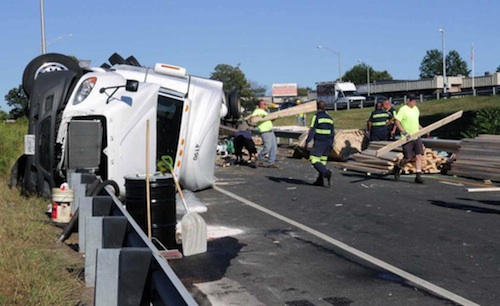 Another spill made headlines in Milford, CT on Thursday when a lumber truck overturned and spilled its contents on I-95 Exit 40 near Milford and Orange at around 3pm. While the driver suffered only minor injuries, the incident backed up rush hour traffic for a mile behind the exit and caused several additional accidents to occur along the interstate. Workers were called to the scene to clear lumber from the road and unload the remaining lumber from the semi-truck wreckage. Two dump trucks and a flatbed truck were used to take the pinewood two-by-fours away and five tow-trucks of various sizes were used for the difficult job of getting the semi upright as it lay on its side with the driver’s side door on the ground and its wheels in the air. According to state police, that portion of the interstate was closed until late Thursday evening.

Aaron S Caldwell
Nothing new! That's why they post speed on ramps and the shit hauler knows the animals move around big time,especially in turns!! Always go 5 below posted speed.Just like surge in tankers!
Sep 25, 2016 5:12am

Walter Franklyn Todd
Animal rights activists showed up to express their outrage. Lmao did any tree huggers show up at the lumber truck accident?
Sep 25, 2016 2:43am

Michael Jacobson
And how many did they build in Worthington Minnesota a huge waist of Minnesota tax dollars most the time Minnesota can't pass a budget and the state shuts down remember the state parks closed over a Memorial Day weekend a few years ago ,couldn't buy a fishing license
Sep 26, 2016 4:59am

Michael Jacobson
Roundabouts are the dumbest Caltrans and European invention ever brought to the USA not big enough for trucks trailer tires always ride up on the middle and cows or liquid sloshing around with to much speed will cause rollover
Sep 26, 2016 4:54am

Travis Heikes
Not sure what caused the crash. Try that stupid fucking roundabout. This isn't Europe and those things suck....
Sep 25, 2016 7:18am

David Bright
This is caused by two things ! The driver and the cows!! Driver going to fast around the get on and the cows crowding up on one side ! Instant turn over!
Sep 25, 2016 3:59pm

Bill Robertson
Why do drivers have to see how fast they can get around a curve the cattle are going to move.
Sep 25, 2016 12:12pm

Chris Currie
All roundabouts are too tight for semi trucks period! They put that shit in to get rid of lights an stop signs they are all bullshit cause more accidents cause of agressive drivers!!!
Sep 25, 2016 3:29pm

Terry Perrott
On sharper turns I slow down more than the "Suggested Speed Limit " so that this doesn't happen. It's not worth "Taken The Chance ".
Sep 25, 2016 7:21am