The company that has already pretty much wiped out the taxi cab industry and started an entire “Uberization” trend changing numerous other industries, now plans to take over the future of trucking. 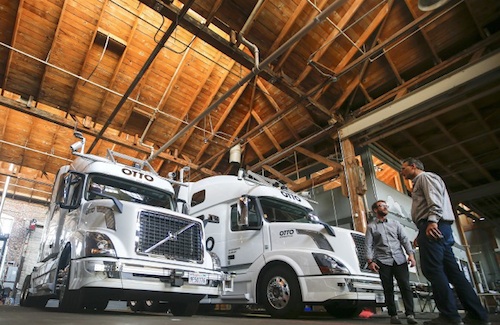 This week Uber Technologies Inc. announced that it has purchased Otto, a technology startup company that is in the business of making self-driving trucks. Uber CEO and co-founder, Travis Kalanick, says that Otto’s co-founder Anthony Levandowski, is a highly skilled engineer who has worked with Google on self-driving technology and is equipping trucks with software, sensors, lasers and cameras so they will be able to navigate the highway on their own. Kalanick says the merger makes them “one of the of the strongest autonomous engineering groups in the world."

This comes after Uber also announced its opening of an advanced technology center in Pittsburgh and now the company plans to open a second giant facility in Palo Alto, CA to house Otto, which will operate with the specific job of focusing on the long-distance trucking industry. "Together with Uber, we will create the future of commercial transportation,” said Levandowski. “First, self-driving trucks that provide drivers unprecedented levels of safety; and second, a platform that matches truck drivers with the right load wherever they are." 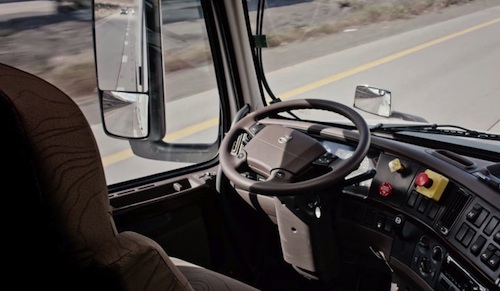 While they may have high-hopes for re-inventing commercial trucking with their technology, the reality of a self-driving revolution has already been facing speculation from the trucking industry itself and from safety experts. After a fatal crash last May involving a self-driving Tesla vehicle, federal regulators have been investigating the company for the failure of its autopilot assisted driving system on the Tesla Model S sedan.

Although Uber promotes its Otto technology as being geared specifically to improve efficiency and safety on the road and says that 90 percent of vehicle collisions are caused by human error, critics aren’t so sure. John Simpson, Privacy Project director at Consumer Watchdog has already called Uber’s Pittsburg testing facility an "outrageous PR stunt" and urges strict regulations for all self-driving vehicle technology.

"There has been no adequate demonstration that Uber's robot cars are safe. It is unconscionable for them to offer rides to passengers at this stage." He also says that Uber's move into autonomous trucks with purchasing Otto shows the company is "doubling down on its bet on robot technology, but we're simply not there yet." He also added, "Self-driving trucks, because of their size and weight, raise serious safety issues if there is an attempt to operate them intermingled with car traffic.”

Judy Jones
Sure, go ahead and get that "self-driving" piece of equipment to drive, sweep out the trailer, scale the load out, open and close the doors, back to the dock, put on or break the seal, and be sure the seal and paperwork is accurate. And let's not forget to load lock, strap, chain, buckle, and tarp!!! Lol
Aug 20, 2016 3:06pm

Tracey Adams
No you gonna do that! The truck gonna drive itself with you sitting in it not touching no controls...
Aug 21, 2016 6:06pm

James R Maxwell
I wouldn't sweat the driverless trucks just yet because there are so many things a truck can't do by itself and shippers/receivers are such a PITA. The truck can't read their 900 posted rules along with chocking the tires, dropping the trailer, go park over here until your load is ready, pay lumpers or Wal Mart extortion fee....... But what I can see is Uber getting into the logistics end of things and opening a whole new can of worms for the elimination of brokers.
Aug 21, 2016 1:27pm

Wayne Leavitt
A $400,000,000.00 aircraft has at least 2 pilots to manage an airplane even with millions of dollars of electronics. Google has people hired to fix algorithms in a search engine. How stupid would it be to think you could turn a computer loose in the vastness of American roads with millions of people's lives at stake? I'm sure these tech nerds haven't thought about how well it will be received by a very smart & perceptive public. My question is why test your theory on the roads, why not test it in the fields? Tractors? Combines? Because these piece of shits are after federal dollars in grants!
Aug 21, 2016 9:45am

Mike Fisher
The public is not smart and perceptive or else they wouldn't have put Obama in office or let our Govt get owned by the uber-rich...the public you speak of will side with technology because that's how they've been conditioned. ...that computers are smarter than humans.
Aug 21, 2016 10:25am

Wayne Leavitt
It's a pie in the sky idea designed to get money from Uncle Sam, typical of left wing wack job thinking. What happens when there is no jobs & the UBER rich control everything ?
Aug 21, 2016 10:44am

Jeffrey Lutz
This is a joke,the first time one of these trucks malfunctions,or the driver on board has to respond and take control,costing precious reaction time and runs over a minivan full of kids,who's gonna get sued?who's gonna lose their license,their lively hood and their freedom,who's gonna do the prison time?The ass monkey nerds that came up with this or the poor bastard on board the truck at that time?This is what happens when idiots that know nothing about trucking think they will be able to capitalize in and industry they know nothing about,Uber needs to stay the hell out of it.So the first time this scenario plays out,that company,and that driver are going to suffer those consequences,and my guess,is then Uber is going to get sued by not only the victims family,but by the trucking company,and the driver.Doesn't sound like these idiots have fully thought out the ramifications.Also,they will still have to pay a driver what he is accustomed to or you'll see a major exodus of qualified drivers,cause we're not babysitting your technology for anything less,plus the expense of the technology,trucking companies won't do it,that simple,the margins are tight as it is.I could go on but it's obvious that this is an absolute no-go,and the brainiac's need to find another industry to screw with,they are way out of their league.
Aug 22, 2016 10:19am

Nicholas Leavitt
Want to learn about uber look up how much a uber driver (taxi service) makes after expenses. It's actually called "the uber scam." This is the last company we need involved in trucking self driving trucks or not.
Aug 21, 2016 11:07am

Jesus Brito Jr.
FMCSA rules say that the DRIVER must have the ability to comunicate with DOT inspectors during inspections. Self driving rig in a level I inspection = out of service.. No dam driver..
Aug 21, 2016 8:14am

Jason Stearns
There will be a human in the truck at all times to do the stuff that don't require driving. This was talked about on the radio a few days ago.
Aug 22, 2016 2:44pm

Joseph Farr
Yeah right.. with all the problems they have with the existing technology? They apparanrly don't realize what they are getting into...
Aug 23, 2016 8:22am

Shirley Dale High
Don't think so. I don't take people places, Uber does and that's what the story is about. Read before you comment.Oh wait a stupid trucker that doesn't read, never mind.
Aug 21, 2016 2:35pm

Jason Horning
The article is not about transporting people, it's about transporting goods in a vehicle grossing 80000 lbs..and I definitely don't agree with it you dried up nitwit...this name calling is kinda fun.
Aug 23, 2016 3:12am

Jeremy Lassiter
Ppl wlways trying to find ways of takeing jobs an putting ppl out of work. Uber why don't you ppl stick in ur ass's u twartwaffles
Aug 21, 2016 8:50am

Ron McClain
Hmmmmmmmmm. Self driving trucks??? There are dozens of lawyers right now salivating over the lawsuits that will follow.
Aug 21, 2016 12:14pm

Jean Gibson Medley
They need to post assault and murders on uber. I listen to the scanner and hear every night at least 3 uber robberies or shootings
Aug 21, 2016 10:04pm

Chris Gvozd
One computer malfunction and maybe a whole family or group of families are dead
Aug 21, 2016 1:54pm

Gary Don Sandquist
Hahaha... Computerized junk! we saw how well the prototype worked....got someone killed because it failed to recognize a white side in the sun! We wont be replaced anytime soon drivers!
Aug 21, 2016 4:20pm

James Johnson
There going to get innocent lives killed with these trucks
Aug 20, 2016 11:15pm

Alexandria Bullock Alex
Not gonna happen those trucks are dangerous
Aug 21, 2016 6:47am

Brian Bickel
When the Wal-Mart concept truck converts to truckS... and are seen on the road....THEN I will worry about this.... the autonomous truck concept can't secure flatbed freight... cant yet tarp it....and with the 50, and 150 mile checks throughout each day freight is on the equipment.... nope... a computer can't do any of that...
Aug 21, 2016 10:02am