Truck Driver Thankful To Be Alive After Hanging Over Ledge


A truck driver says he is lucky to be alive after a “mishap” that left his life literally hanging on the edge of an overpass for nearly two hours as emergency crews worked feverishly to rescue him. But he also says he is worried about how the incident will affect the future of his job. 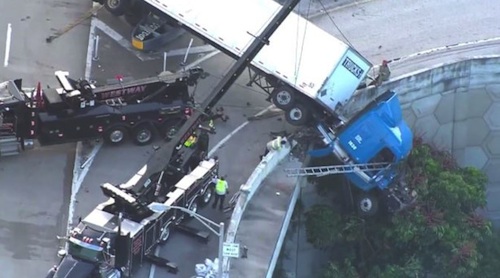 The accident happened early Thursday morning at about 4:13 a.m. when 58-year-old William Brake was hauling a load of cabinets from Georgia to Fort Lauderdale, driving south on Interstate 95 through Boca Raton. Brake said he was unfamiliar with the area and thought he was on the express way instead of the off ramp just past Linton Boulevard, toward Congress Avenue. Just before reaching the intersection at Congress Avenue, he realized it was a right-turn only and tried to avoid it by slamming on the brakes. Instead, he slid across the roadway, over the median, through another two lanes of traffic and through a concrete wall and ended up with the cab of his truck dangling over railroad tracks used by Tri-Rail. 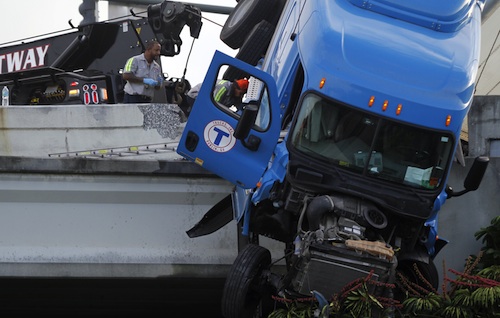 According to Florida Highway Patrol, Lieutenant Earl Hingson, Brake actually saved his own life by using his brakes because he would've otherwise likely plummeted onto the Tri-Rail tracks instead. “That would definitely be a bad crash and probably very difficult to survive," Hingson said. Instead, the truck driver hung over the edge of the tracks for a very harrowing 90 minutes as rescuers performed the difficult job of rescuing him from the dangling cab. They extended a ladder from Congress Avenue through to the passenger door of the cab and Brake was able to crawl to safety over a 35-foot drop. Fortunately he escaped with only minor injuries and his next worry was how things would go down with his employers who were driving down to Florida to pick him up. "I don't know how I'm going to explain this one. It's my first wreck ever," Brake said.

After rescuing the truck driver, it took another six hours for crews to get the cab of the truck from the ledge and back on the road. The front of the truck was completely destroyed and between 50 to 75 gallons of fuel had spilled from the tractor-trailer. The I-95 northbound ramp was closed until the afternoon and trains were delayed for up to nearly two hours as a result of the crash. While Hingson credited the truck driver for his quick response that saved his own life, he also said investigators are looking into several possible factors of what caused the crash, including possible driver fatigue. Hingson also said that charges against the truck driver are pending.

John MD Kessner
Lucky steering wheel holder now he can look for a job at the crappy companies like we all know who they are they be every where
Aug 08, 2016 7:26pm

Nicholas G Tomcheck
Maybe the driver will slow down in curve now after that experience.
Aug 08, 2016 4:56pm

Pat Offenberger
It's been close to 45 years for me, and I still claim rookie status! I'm afraid to figure this business out, I'm sure I'd figure out I'd make more flipping hamburgers.
Aug 08, 2016 8:29pm

Software Scripts
Anything related to this is important
Aug 09, 2016 7:30pm