Police are searching for a male suspect who is believed to have set at least seven semi-trailer trucks on fire early Sunday morning in Brooklyn, NY. While authorities still have little information about the person behind the incident, a truck driver who works in the area says fires like these have been happening for months, especially during night hours when most companies are closed. Private investigators are working together with police on the case and a witness (who wishes to remain anonymous) has come forward saying that she saw a box truck pull up to the location, a man exit out of the passenger side and then break into at least one of the tractors set on fire. “The guy got out, he was short, I’d say 5’7”, 5’9”; kind of chubby. He had on all black; a black hoodie,” she said. 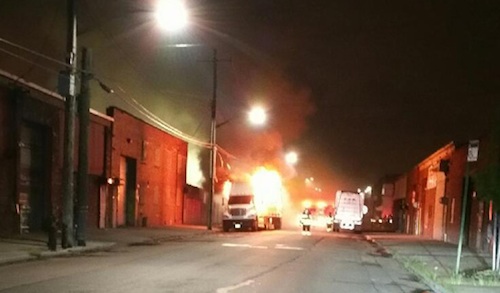 The trucks were parked in an industrial area of Brooklyn along Stanley Ave and Linwood and Chestnut streets. The area is known as a common location for trucks to park overnight and often many truck drivers sleep in their cabs, especially when the job requires them to be away from home and designated commercial truck parking areas are getting harder to find across the US. Fortunately, no truck drivers were actually sleeping in the trucks targeted in this most recent incident.  The smoked out remnants of truck beds were first discovered at around 2:50 am along Stanley Avenue, followed by additional burning trucks found on Linwood and Chestnut streets. All of the damaged trucks were 18-wheelers, and the cab portions of the trucks were all damaged with the trailer portions left unscathed. 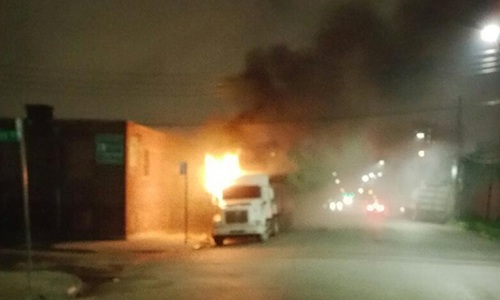 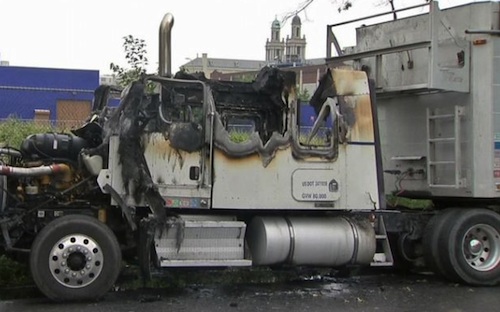 It took firefighters several hours to put all the fires out and the blaze left mirrors melted, steering wheels destroyed and some roofs completely burned off the cabs. Charred mattresses were still left all over the ground as of late Sunday and local truck drivers were left feeling uneasy about sleeping in their cabs. “I’m probably not going to get much sleep if I decide to stay here after seeing that,” said truck driver Roberto Lopez. “Usually when you come to a city like these, people knock on the door and I ignore it. Now I won’t,” added driver T.J. Wyatt.

Linda Dean
People they are the ones who brings thinks that we need God not going to help a country that is full of hate we need Jesus badly you will have to meet Jesus for judgement day and God have mercy on your soul
Aug 03, 2016 7:48pm

Johnny Stoltzfus
They don't like eighteen wheelers, I'd love to see that city if we all stayed out of there for just 2 days!
Aug 02, 2016 5:40pm

Beth Howells
there walking floor trash trailers and if they check its a fight between trash hauling companys happens all the time in ny city
Aug 03, 2016 5:20pm

Gary Melson
Somebody has got a bad case of the LITTLE MAN SYNDROME. Hopefully they catch Him really quick and make a good example out of Him ..
Aug 03, 2016 6:24am

Lester D. Bratcher
The NYPD should do a sting operation and catch the little punks cause 18 wheelers aren't cheap
Aug 03, 2016 6:53am

Matt Litteral
I've always heard that hauling garbage around there gets competitive big business so to speak.
Aug 04, 2016 4:48pm