A fiery crash involving two semi-tractor trailers on I-55 spread to three passenger vehicles and left one motorist dead. Fortunately, everyone else involved in the accident managed to escape with their lives including the truck drivers, but the flames were enough to leave the semi-trucks in charred remains and shut down all lanes for hours. 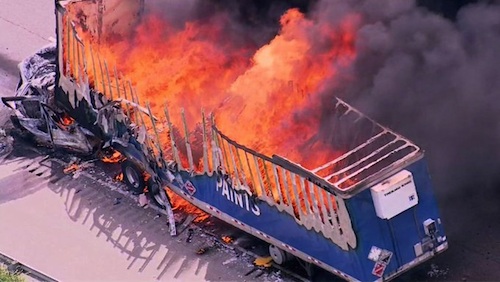 The tragic incident occurred Monday morning at around 10:50 am on I-55 near Cicero, which is just over 20 miles from Chicago, IL. According to Illinois State Police, the chain of events was ignited when two trucks collided on southbound I-55. While it is still not determined what exactly caused the collision, one of the semis was hauling a hazardous material - 17,800 lbs. of paint and the other was carrying 40,000 lbs. of frozen meat. The crash caused the paint materials to spill and ignite a massive fire, engulfing both trucks in flames and then spreading the fire to three other vehicles. 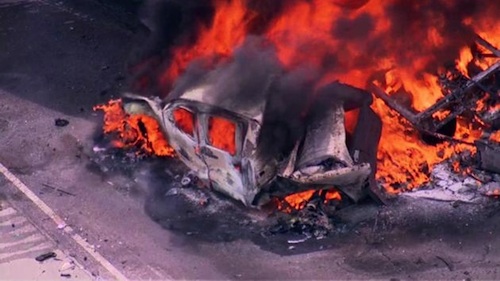 Fortunately the truck drivers managed to escape from their cabs, but tragically a motorist was found dead in a minivan lodged beneath one of the trucks. The deceased motorist has not yet been identified. Two other vehicles were involved in the accident and all appeared to be engulfed in flames. The occupants of the other vehicles all survived, however one person was taken to the hospital in stable condition. "It's going to take some time for our investigators to determine exactly what happened. Review all the parties that were involved, all the drivers and passengers if applicable to find out exactly what happened," Master Sgt. Jason Bradley said. 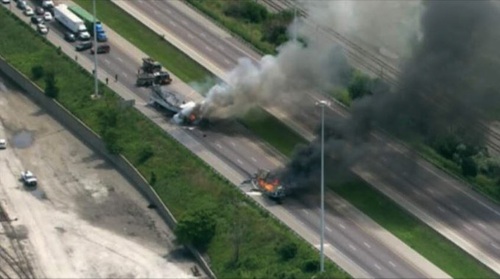 The inferno was massive enough that thick, black smoke could be seen for miles away and it reduced both semi-trucks to charred, melted wreckage. At around 11:25 am the fire department had upgraded the fire to a two-alarm and a Level 1 HAZMAT response was called to the scene. A foam truck from Midway International Airport was also dispatched to help put out the flames and five ambulances were called to the scene. “We're concerned about flammable liquids, there's corrosives. So we had to stop the traffic in both directions as well as the runoff of the flammable liquid coming towards the traffic stuck in traffic - a lot of things to juggle at first," said Asst. Deputy Timothy Sampey, CFD

The fire was extinguished by around 11:55 am but traffic was backed up for miles in both directions of I-55 as cleanup crews and investigators performed their difficult jobs of dealing with the grizzly aftermath. Drivers were advised to take alternate routes.

As of Monday afternoon, two lanes of northbound I-55 reopened but all southbound lanes are expected to remain closed for quite some time and traffic is being detoured onto Pulaski.

William Seifert
The incident tells me the traffic was dense...I see it all the time following too close...tailgating...driving too fast for driving conditions.....always leave an option...screw the load..having to be there...the safety of the load,equiptment and driver come first.....
Jul 25, 2016 6:16pm

Arley Dub
Yeah William. How does your theory about what caused the accident have anything to do with a post that says "cause of accident yet to be determined"? Geesh, get with the program man! Lmao ;)
Jul 26, 2016 6:17am

Sue Domenico
William did not say this caused the accident. He just made a comment as to what he sees everday.
Jul 26, 2016 12:15pm

Jesus Brito Jr.
I agree with Mr William Seifert.. I've been driving truck 21yrs now and I'm still amazed at how people drive now days.. But even worse is this "new breed" of truckers.. Definitely under trained with the ' me, me, me' mentality.. Combine that with under trained 4 Wheeler's.. America's most dangerous interstate..
Jul 26, 2016 7:00pm

Dianne Reed
Scott not all truckers are bad and do that.. we have to deal with multitudes of obstacles 4 wheelers who think they are entitled to infringe in a 80,000 pound machine and put the brakes on...what an unfortunate mishap. Please show some compassion or a little class. And remember everything you have has come by a truck at some point...so "You're Welcome"
Jul 28, 2016 9:06am

Susan Traweek Allen
These crashes sure has been happening a lot lately? You Truck Driver's be extra careful out there on those highways!!🚚🚚🚚
Jul 26, 2016 8:17pm

Scott Dunham
Elog mandate has all truckers basically on the same schedule now. Way more truck traffic forced to drivefrom 6am to 7pm than ever before.
Jul 27, 2016 1:03pm

Gerald Gross
1st Scott Dunham there is no elog mandate 2nd this shit was going on way before elogs was even brought in what it is to many people driving with there heads up there ass
Jul 28, 2016 11:33am