Things have gone from bad to worse for the truck driver arrested last Saturday after a driving rampage that killed a motorist, injured two others and damaged several vehicles in his path. 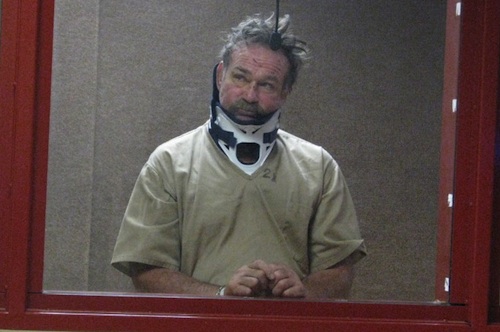 On Wednesday, 57 year-old Daniel Burnam Williams appeared in a New Jersey courtroom wearing handcuffs and a neck brace with cuts all over his face. Not only is he facing charges of first-degree aggravated manslaughter, second-degree vehicular homicide and second-degree reckless aggravated assault, prosecutors also informed the court of Williams' extensive record of 55 prior arrests in California alone. According to Union County Assistant Prosecutor, Shawn Barnes, Williams’ record includes at least eight felony convictions and numerous arrests for crimes involving drugs, alcohol and domestic violence. Barnes added that Williams also has three arrests for providing false identification and has used 10 different aliases and eight separate social security numbers. Not to mention, he has a whole other arrest record from his other home state of Colorado. 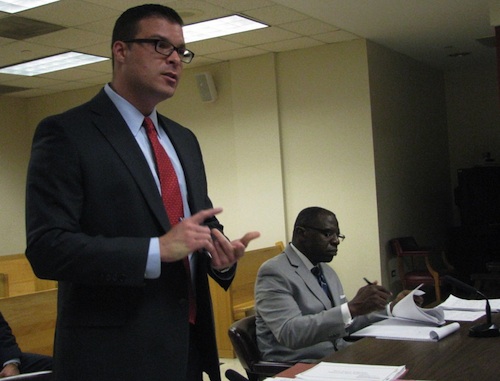 When Barnes got into the charges at hand, he presented the judge with the timeline of events that started shortly after midnight on Saturday, July 9. "The defendant operated a Freightliner truck recklessly on the streets Elizabeth for 3½ miles," Barnes said. "He was driving in a deliberately evasive manner to avoid police cars that were positioned to stop him." He continued to allege that Williams barreled through a barricade, then sped down several streets and rammed into a car, immediately killing the driver identified as 24 year-old Jeffrey Oakley of Elizabeth, NJ. Barnes continued to describe the chain of events until police were finally able to remove Williams from his vehicle. Barnes told the court that police had detected a strong odor of alcohol when they removed him from the vehicle. 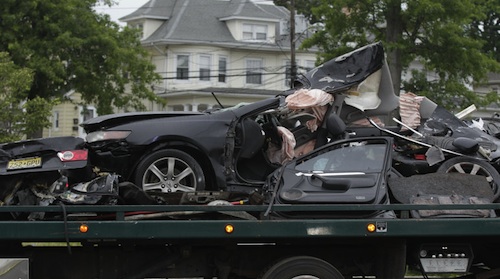 Judge Brenda Coppola Cuba heard the charges and proceeded to direct questions at Williams himself, which he answered only by nodding his head from behind the glass window. "Can you answer?" Cuba finally asked him. Williams then answered into the microphone, "Yes, judge."

Williams' court appointed attorney, John Johnson of the Public Defender's Office, entered not guilty pleas to all the charges. It is uncertain as to how he will approach the difficult job of defending his client. Johnson also requested Williams' bail be reduced from $2 million to $500,000, arguing that the injuries he suffered from the incident render him an unlikely flight risk. Although police had fired shots at Williams during the chase and earlier reports said he was struck once, there was no indication of any gunshot wounds when he appeared in court. Barnes immediately opposed the bail reduction, reminding the judge of Williams’ extensive arrest record and history of aliases. Cuba sided with the prosecutor and kept Williams' bail at $2 million.

Victor Collins
But according to the article he had 55 prior arrests. But it doesn't say a word on how many convictions. Arrested doesn't indicate guilty.
Jul 14, 2016 10:51am

Jesus Brito Jr.
Why was this asshole allowed to drive a Rig in the first place.. He should have been looked up a long time ago.. He gives each and every one of us Truckers a bad name.. I've been trucking 21yrs and my record is stopless and I'm proud of that..
Jul 14, 2016 12:42pm

Mike Bendall
The reason he was allowed to drive is because there are greedy own/operators that run more than 1 truck and need any idiot with a class A cdl, and they're willing to look the other way when it comes to felons with whatever kind of record. He'll probably plead insanity.
Jul 15, 2016 8:24am

Terry Davis
Remember, this was Californicate....those stupid liberal f**ks think they could have rehabilitated Ted Bundy!
Jul 15, 2016 10:05am

Alicja Zuber
Talking from the point of view of trucking company owner ... It happens I know what's involved in hiring a driver whether you work for yourself or not . Learn about it before you make stupid comment like that .
Jul 15, 2016 2:19pm

Sally Chambers
Alicja Zuber - I was wondering the same thing. I've actually managed an auto haul division in my past & have also driven for 23 yrs. I thought 'own authority' as well. But the article also says he used aliases & different SS#'s. This individual certainly isn't the norm that's for sure. If he ran under his own authority he's pretty much immune to background problems. They'd only come in to play if he wanted HAZMAT endorsement. Much of the qualifications required are company generated. When one man is the company those standards aren't so strict.
Jul 16, 2016 12:45pm

Alicja Zuber
Sally Chambers I have to admit that it didn't cross my mind this guy would be an independent trucker . Why ? Because I think it is so much to handle these days in order to have your own authority ! The crazy guy driving drunk just doesn't appear in my head as a truck owner and businessman. I have been trucking for last 14 years , been O/O for last 6 . In order to get my own authority I had to join the drug&alcohol consortium , been drug tested couple times , been audited by DOT , insurance it's a big part of it , I don't know how you can get decent insurance these days with bad records . I myself pay 13K for a year with perfect record . You are right thou those rules are not that strict , but realistically I think it's hard . Clearly thou wether you are independent or not you you can be a trucker and criminal at the same time !
Jul 16, 2016 4:04pm

Darrin Dowell
This crap pisses me off. Due Process - YES. But there is NO dispute to the actions he took. So now, why do my taxes have to go to pay to defend him, house and feed him, and get him medical attention. That money would be better spent on helping veterans rather than this POS.
Jul 15, 2016 7:06am

Bill Keene
Because our judicial system sucks. As a,witness you are sworn to tell the truth under penalty of law but the the "officers" of the court fear and hate truth above all else. All Lawyers should burn in hell.
Jul 16, 2016 1:01pm

Dennis Dunaway
55 arrest in California with 8 felonies. They said he also had a extensive arrest record in Colorado. This is someone that just doesn't care.
Jul 16, 2016 12:28pm

Michael Cummings
Had to be driving for one of the Bottom Feeder Companies.
Jul 14, 2016 1:40pm

Victor Collins
The driver has no choice but to plead Not Guilty. If he pleads guilty none of the facts of the case would ever be known.
Jul 14, 2016 10:53am

Shawn Brinker
My dad was a truck driver, old school. He had a custom peterbilt, he was a drunken, selfish piece of trash who was hammer down at all times. He caused quite a few accidents and considered himself a "Knight of the Road". A lot of the truckers he ran with were just as drunk and reckless as he was. So, you'll understand why I roll my eyes every time I here how much better the old school guys are than the new school guys. There were good and bad drivers back then, just like there are good and bad now. Most of the drivers I know now are safe and competent. I have met my fair share of idiots though, but that's nothing new.
Jul 16, 2016 9:43pm