On Tuesday, a two family vacation turned into a horrific nightmare after a tragic chain of events ended with two fathers watching helplessly as their wives and children burned to death, trapped in a mini van. 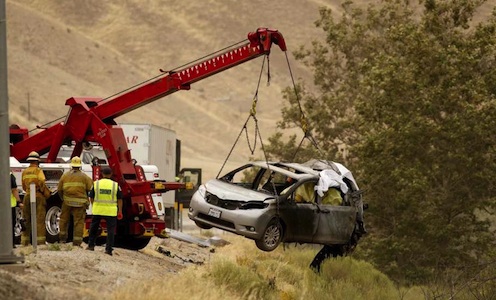 The incident occurred early Tuesday morning at about 3:30 a.m. on the southbound 5 freeway near Gorman, CA. According to the California Highway Patrol, 34-year-old Aaron Hon Wing Ng and 45-year-old Wei Xiong Li were driving in a minivan with their wives and each couple’s two children. The two families from Northern California were heading on a vacation that never happened. They had reached the Tejon Pass, which is about 65 miles outside of Los Angeles and a part of the I-5 traveled by up to 19,000 big rigs each day. They were nearing the edge of the Los Padres National Forest near Gorman, when they got into a minor accident with a BMW. They pulled over to the shoulder of the road to inspect the damage, not aware of the worse danger posed with part of the mini-van sticking out into the dark highway. Before anyone had a chance to get out of the vehicle, a semi-truck came along the dark road at 55 miles per hour and was obviously not able to see the mini-van in time to slow down. The semi slammed into the back of the minivan and sent it hurling down a steep embankment with all eight passengers inside, finally coming to rest at the bottom of a grassy ravine. While the two men were able to jump out of the vehicle's front doors, their families were trapped in the back part of van and they began desperately attempting to pry open the back doors and pull everyone to safety. But the doors wouldn’t budge. The truck driver rushed down the embankment and tried to help, but the doors were jammed shut. 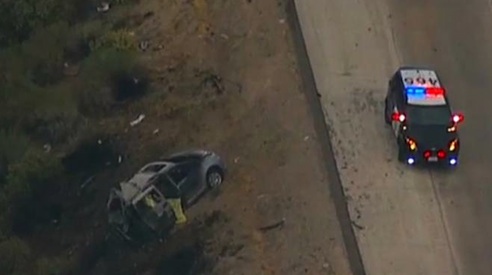 California Highway Patrol officers, Dan Williams and Jeff Burdick, were the first responders to arrive at the scene and Ng and Li ran towards them screaming for help. “We saw the husbands come running up to us, told us their families were in the vehicle still,” Williams said. At that point the mini-van erupted into flames and the situation became a deadly race against time. “My partner went and tried to get into the van door,” Williams continues. “The flames came at him. He had to back out. I grabbed the fire extinguisher, and I tried to extinguish the flames. But like we said, the van burst into flames very, very quickly and we were unable to assist in getting anyone out of the van.”

But Ng and Li refused to give-up and ran back towards the burning van, and continued to try to wedge the doors open while the flames burnt their hands and faces. Eventually it became obvious that there was nothing anyone could do and the officers had the heartbreaking job of restraining the two men to keep them from further injuring themselves. “We just held them. That’s all we could do,” said Burdick. By the time the fire department arrived at the scene the two wives and all four children were already dead. The two men were airlifted to hospital with moderate injuries.

Mike Streit
Or have them climb thru the functioning front doors. We are missing some details.
Jun 29, 2016 3:53pm

Trucking Unlimited
Had the same thoughts and from the details so far we can only assume the passengers were trapped in a way that prevented them from all escape options. Especially if the police and truck driver were unable to do much either.
Jun 29, 2016 3:59pm

Jason F Fletcher
Sad. They will find a way to hang the driver for it. In the eyes of the public and law enforcement, the truck diver is ALWAYS at fault. Truck Drivers - GUILTY UNTIL PROVEN INNOCENT!!!
Jul 01, 2016 9:55am

Bill Hibberts
Very sad People get off the roadway as far off as possible you never know what can happen in the dark or any other time so sorry for the families
Jun 29, 2016 2:35pm

Heather Barr
How horrible for the survivors. Car windows don't break very easily. Neither is crawling over the front seats into a fire to get out. I'm sure if they could have been gotten out they would have been. I'm sure the husbands and fathers did everything they could. So sad.
Jul 01, 2016 11:12pm

Karla Scott Dailey
This is a terrible tragedy but you would not believe how many people don't get all the way off the road when they pull over please get off the road get everyone out of your car before inspecting any accident damage
Jun 30, 2016 3:24pm

Todd Ross
I drove truck for 30 yrs, sometimes grossing over 165,000 lbs..... How did this truck driver NOT see ahead something sticking into his lane? I'm sorry, we expect 4 wheelers to not think, that's why we are supposed to be "professional drivers"! We are looking way ahead of where we are. I disagree with the title on this link
Jun 30, 2016 9:53am

Roy Stewart
55 mph my ass. No truckers drive 55 mph on that highway! Take that smoke and stick it up someone else's ass not mine. That shit wont fly with me. The truck driver hit a vehicle on the roadway at full speed and killed 2 wives and 4 kids. And even if the trucker was going only 55 mph which I dont believe not for a second why didn't he move over a lane to avoid hitting the minivan? Sounds like bullshut to me.
Jun 30, 2016 1:17am

Derek Brickles
You do realize that now days if the report says 55 and there was a fatality that the truck has to go threw a inspection and one thing they check is the ECM of the truck because it is like a black box and records everything that the truck does also if the truck is stolen police can shut it down as long as they have the vin number which most truck have on side of them, manufactures can track them via the ECM on a computer satellite tracking system. Today's trucks a more of a big computer on wheels why do you think the new E-log law goes back to trucks 2000 and newer that they are mandated to have the computer logging. Pre 2000 trucks either had no computer or it only operates what it was design for but it doesn't track and record.
Jun 30, 2016 1:34am

Del Walton
Do you eat with that mouth? Although this is a very bad tragedy a and we should all send prayers to the families and victims. It's not always the truckers fault. Get the facts before you spue you're hatred. I believe that they call them accidents for a reason. But your probably right, the trucks did bring everything. The van , the gas, the clothes, and yes even the victims. Your right , in your eyes it's always the truckers fault! Dumbass!!!
Jul 02, 2016 4:05am

Darren Clark
I would literally die saving my family, my job is to protect them the best of my ability, that means i would die for them. I wouldn't be watching anything under any circumstances!
Jun 30, 2016 9:08am