On Thursday, a true highway miracle occurred when a man crashed his pick-up into the back of a semi-truck at high speed and reduced his vehicle to a metal ball, yet somehow managed to survive the incident with only minor injuries. 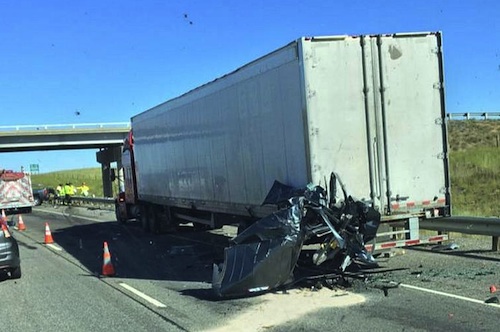 According to the Montana Highway Patrol, the crash occurred Thursday morning at around 8:30 a.m. on Interstate 90 just east of Columbus. A semi truck driver had been experiencing mechanical issues and was pulled over on the side of the highway. Apparently, a male driver of a pickup truck didn’t notice the parked semi as he came upon it and crashed into its rear at 84 miles per hour. A trooper who responded to the scene said the pickup truck was literally crunched down to a ball of metal and it was a miracle that the driver survived at all, never mind with only minor injuries. The driver of the semi was not injured and it is still not known whether the pick-up truck driver was cited for the crash. 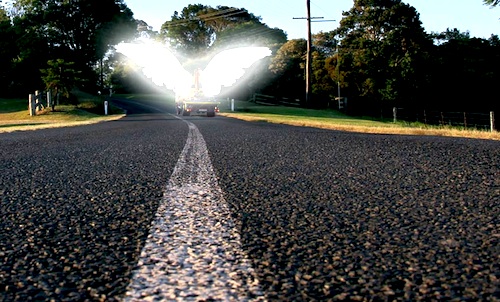 In Georgia, another miracle occurred and a truck driver earned his wings after his heroic efforts successfully rescued three people from their crashed vehicle just moments before it burst into flames. The incident occurred also on Thursday, in Gainesville, Georgia and involved a four-vehicle wreck on Ga. 369/Browns Bridge Road near Weatherford Road. According to Georgia State Patrol, a 17-year-old was driving a Ford Escape eastbound on Browns Bridge Road and began rounding a curve as a Subaru Forester driven by 71-year-old Joanne Kessler, and a Dodge Durango driven by 53-year-old Jeffrey Barrett approached from the opposite direction. The young driver was unable to handle the curve and keep the Escape in its lane and he crossed the centerline into the on-coming traffic. The Escape struck the Subaru’s left side with its left side in a sideswipe manner and then sideswiped the Durango also on the left side with its left side, according to Trooper, Jonathan Munger. “After impact, Kessler’s car rotated counterclockwise, overturned and became airborne.” The chain reaction crash became worse when the Subaru proceeded to slide on its top into the eastbound lanes and crashed head-on into an oncoming Ford Expedition. Lynn Voyer was driving the Expedition with two teenage passengers.

At that point, a truck driver who was on a delivery job for Morgan Concrete, came upon the wreckage and quickly realized that lives were at stake and he had to act fast. He immediately pulled over his semi-truck and ran over to the Expedition, pulling the driver and the two minors from the vehicle just moments before it was engulfed in flames. Fortunately, everyone involved in the wreck survived and taken to Northeast Georgia Medical Center with non life-threatening injuries. “All are expected to be okay,” Munger confirmed. Browns Bridge Road was shut down for two hours following the accident and the 17-year-old driving the Escape was charged with failure to maintain lane and failure to exercise due care.