An off-duty police officer has been charged with DWI after causing a fatal chain reaction crash that took the life of a truck driver north of Austin, early Tuesday morning. 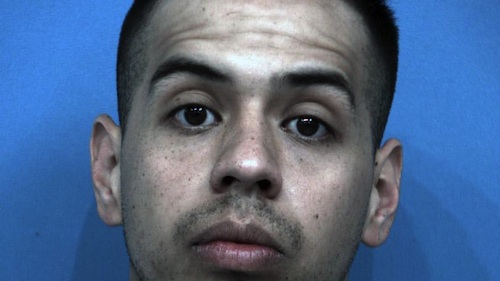 According to authorities, 26-year-old Alan Eduardo Dieguez is a three-year veteran of the El Paso Police Department and was off duty driving his own vehicle while intoxicated on Tuesday morning. A witness told investigators that at about 2:15 am, Dieguez was driving his Hyundai along Interstate Highway 35 at speeds reaching over 100 mph and cutting in and out between vehicles. Dieguez then struck the rear of an 18-wheeler truck and the impact was so severe that the engine of his Hyundai was ejected from his vehicle and scattered debris across three lanes of traffic. The semi-truck driver who got rear-ended, pulled over and walked out on to the road. Authorities believe he was going to check on Dieguez and his brother, who was riding as a passenger in the vehicle. Tragically, a second semitrailer came along and hit the road debris from the first crash, then skidded off the roadway and struck the first truck driver who was still standing on the road. The second semi then rolled onto its left side and skidded into the ditch, then caught fire. The terrible chain of events continued when a third semi-truck came along and also hit debris and then caught fire. 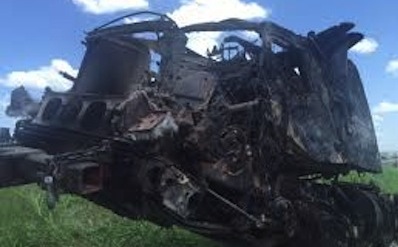 The truck driver that was struck while trying to render aid was killed instantly and was later identified as 56-year-old Dane Keith Rutter of Stockdale, TX. The other two truck drivers were taken to a nearby hospital with minor injuries, along with the off duty officer who caused the deadly chain reaction. According to authorities, Dieguez fled the hospital on foot after refusing medical treatment but Round Rock police officers soon apprehended him. Apparently, Dieguez told a Department of Public Safety Trooper at the hospital that he had drunk one or two rum and cokes and was driving from Austin to San Antonio. But after he refused to perform sobriety tests, authorities arrested him for driving while intoxicated. He then later agreed to give a blood sample.

Police took him from the hospital and booked into the Williamson County Jail. So far, it is confirmed that the officer is charged with DWI and unlawful carrying of a weapon. Officials also confirmed he will be placed on administrative leave when he returns to El Paso but it is uncertain as to whether he will face other charges and/or ultimately lose his job.

James McCreight
Geezuz don't these guys pay attention? Always know what's going on around your vehicle in every direction as far as the eye can see, even when on foot. RiP to the veteran road monkey.
Jun 24, 2016 5:29am

Allan Thompson
We as truck drivers always have to conduct ourselves as on duty 365 days a year even while on vacation because the lives we live depends on that CDL so cops, firefighters, EMT's, pilots, cab drivers etc should have to abide by the same standards as Class A CDL drivers on that note loose his license and face jail time along with the civil lawsuit that we would face.
Jun 25, 2016 12:57am

Dennis Bergholz
He will get a slap and thats it cause half of them are dirty player's and thats the way it will be or he will sing on a lot of people just watch
Jun 23, 2016 7:32am

Dennis Bergholz
Just watch i cop in md knocked a house right off its blocks hurt the people in the house and it got kicked out of court cause he was a tooper for 15 yrs all his insurance co did was rebuild the house
Jun 23, 2016 6:37pm

Wayne Olson
Cops shot unarmed folks in the back on video and walk with out a charge, even when they do wrong folks won't convict because they are afraid of the repercussions from the others in blue
Jun 24, 2016 5:19pm

Greg Langley
Folks he did not have a CDL he was driving a car he was not hauling 80,000 lbs. Yes he needs to be charged with dwi and lose his law enforcement job. But you can't hold him to the standard of a CDL license driver only to the standard of a police officer.
Jun 25, 2016 6:39pm

Roy Stewart
Another senseless death of a truck driver only this one he is set up to lose his life by a drunk offduty police officer and ultimately killed by another truck driver who couldn't stop in time or react fast enough to safely miss him standing on the highway. Such a tragedy so senseless!!! RIP driver!!!
Jun 23, 2016 2:02pm

Karl Houston
He needs to bee charged with the death of the truck driver and the injures of the other persons
Jun 25, 2016 5:40am

Janie Latigo
He should get charged for the death of the drivers what if it was a semi that caused this i wonder how they would go at us smh
Jun 25, 2016 8:41am

Al Reigert
Had the shoe been on the other foot, the truck driver would have been charged with murder and thrown under the jail
Jun 23, 2016 5:31pm

Jason Scholbrock
Agree put his ass in jail and throw away the key thy need to go by the law to nt just do wht they want to a drity cop to me thts why I hate cops
Jun 23, 2016 1:28pm

Eddie Venatta
Why is this POS NOT sitting in jail for killing a person while in the commission of a crime?
Jun 23, 2016 2:28pm