The truck driver who caused the fatal crash that killed five nursing students in Georgia on April 22, 2015, is now facing a slew of criminal charges for his driving errors and so is the trucking company that gave him the job. On Wednesday, a Bryan County grand jury indicted John Wayne Johnson on five counts of first-degree vehicular homicide, serious injury by vehicle, reckless driving, failure to exercise due care and following too closely. The trucking firm, Total Transportation, was also indicted on multiple charges of homicide by vehicle, along with one count of criminal responsibility of corporations and serious injury by vehicle. 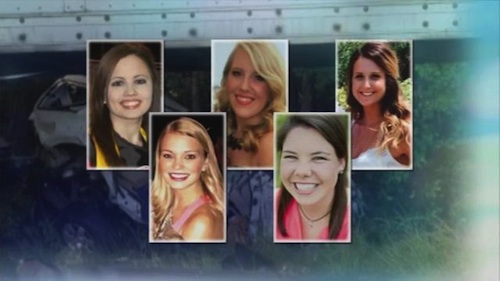 The crash occurred early in the morning on April 22, 2015 as a group of nursing students drove along I-16 to Savannah for their last day of clinical rotations in their first year of school. A separate traffic accident had occurred up the road and caused traffic to cluster in a stop and go crawl. When Johnson came upon the backed-up traffic, he failed to slow down and slammed into the students’ car at 68 miles per hour. The accident took the young lives of Emily Clark, Morgan Bass, Abbie Deloach, Catherine (McKay) Pittman, and Caitlyn Baggett. Brittney McDaniel and Megan Richards were also injured during the crash. In order for vehicular homicide to be classified as a felony in Georgia, there needs to be an underlying aggravated crime involved and for Johnson, it’s the reckless driving charge. Prosecutors allege that he crashed into the vehicle at the speed of 68 miles per hour without ever slowing down. 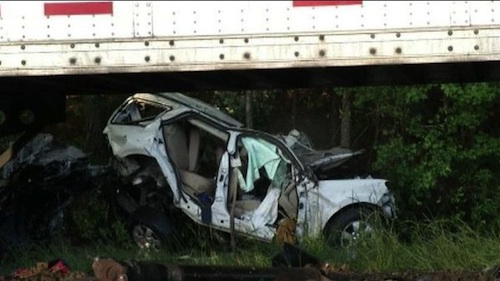 "He didn't even hear the crash, when other witnesses described the crash as being worse than Afghanistan explosions that they had survived,” said attorney Mark Tate. Tate represented one of the victim’s families in a civil suit with the trucking company that resulted in a multimillion-dollar settlement earlier this year. He also said it was clear from the beginning that the case would not end in civil court. "When you have this dramatically large loss of life, simply civil liability or misdemeanor liability in the criminal justice system is not sufficient to drive the message home what kind of hell you really did bring down on these families,” he added. 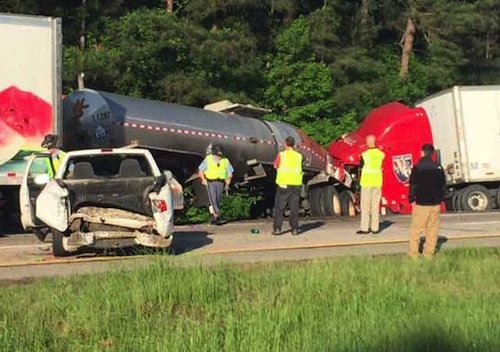 Under a Georgia law that allows criminal charges to be brought against corporations, Total Transportation is being charged with criminal responsibility of corporations as well as serious injury by vehicle and the five counts of vehicular homicide. "This trucking company knew that the driver, John Wayne Johnson, had been terminated from his prior employment because he fell asleep and totaled and crashed a truck,” said Tate. An investigation following the crash also found records indicating that the company drivers collectively incurred 266 unsafe driving violations over the last 2 years. The breakdown included 107 speeding violation, 45 violations for not following a traffic control devices, nine violations for driving while using a cellphone and five for following too closely.

Johnson could face up to 25 years in prison if convicted on all charges and the trucking company will have to negotiate with the County District Attorney's Office to determine a heavy fine for its criminal liability.

Stevie Lynn Eaton
5 future nurses lost their lives that day.... they vowed to save lives daily in their profession.... But their aspirations and dreams were cut short by a wreckless driver. So sad.
Jun 21, 2016 4:32am

Daniel Goble
Just more proof that electronic logs do not prevent accidents yet will the FMCSA listen never they have a Personal Agenda to get owner operators out of business while things like this will continue to be the normal happening
Jun 19, 2016 4:01pm

Bradley Putchat
Odd thing, all their company trucks are equipped with onguard which should have hit the brakes even if he didn't. Very odd.
Jun 19, 2016 10:25am

Siobhán Mauthe
You can override the onguard by leaving your foot on the pedal.
Jun 20, 2016 8:13am

Bradley Putchat
Depends on the version, some hit the brake anyway even if your foot is on the gas
Jun 20, 2016 7:38pm

JR Golliday
Sentence the same son of a bitch to death and the trucking company should be shut down for good because they hired that asshole with all those violations.
Jun 18, 2016 3:22am

John Hanks
He should have been sentenced to life with no parole. Set an example for others.
Jun 18, 2016 4:57am

Rob Decock
Too bad I couldn't read the story, with that STUPID recruitment ad that covered tge whole page and won't go away....
Jun 20, 2016 3:10am

Joe Swett
I'm sorry for the people he killed and their families, but I hope it makes some of these big companies think twice about the irresponsible assholes they hire. I also wonder if he was trying to make an Elog work, instead of taking a nap when he needed to. No safety comes from putting a driver in a race with a clock.
Jun 19, 2016 8:48am

Roy Stewart
Wow! I saw drivers like this all across the country who shod not be driving a big truck for anyone. It doesn't matter how fast you're going you better be able to slow down and come to a safe stop with hitting another motorist. If you cant stop your truck safely you dont belong behind the wheel. And any company who hires a driver with recent wreckless driving behaviors own these responsibilities since they knew and they hired him anyways. 5 innocent lives lost for nothing because someone allowed this idiot to drive a bigrig when he shouldn't have been. Such blatant disregard for the safety of others should yield you full resourse and you should lose your license to operate and your freedoms too oh and a whole lot of money to pay for the damages and losses of life you caused.
Jun 17, 2016 3:34pm

Gil Burnett
If you didn't witness the accident you really don't know what happened
Jun 17, 2016 5:55pm

Roy Stewart
I know what happened Gil. A professional truck driver traveling 68 mph hit and killed 5 beautiful promising women in their prime. No braking, no skid marks nothing showing he even tried to stop or avoid hitting them. First of all a professional doesn't allow his space to shrink without actions like hitting the brakes or using his/her engine brake to break momentum. As far as I'm concerned my comments stand and I dont GAF what you think Gil!
Jun 17, 2016 6:00pm

Phil Killerlain
I did not Witness this terrible accident ! So I'm not going to like a lot of you set in judgement of another man's life ! I will leave that up to a jury of 12 people that will hear all the FACTS not what gets printed in the HEADLINES to get your attention !
Jun 18, 2016 12:59pm

JR Golliday
Well dude if a member of your family was killed in an accident .you would set judgement.
Jun 18, 2016 7:43pm

Phil Killerlain
JR Golliday you seem to put a lot of faith in the stories on FaceBook ! And the media , if you ever have a Accident and someone is killed ? And you are not at fault ? Then you better hope that someone with common sense enough to listen to the FACTS is on your jury ! Not a fool like you !
Jun 19, 2016 9:20pm

John MD Kessner
Lol I hope the driver gets hung an the company owners got to the BIG HOUSE AN All OTHERS INVOLVED. ALL THESE CARRIERS SUCK SHIT WHITE COLLAR CRIMINALS SCUM BAGS
Jun 19, 2016 6:51pm

Mario Velazquez
In all fairness who hasn't totaled a truck before. It comes with the business
Jun 17, 2016 6:16pm

John Fioretti
Mario, before you engaged your mouth, did you really think about that question?
Jun 18, 2016 7:38pm

Allen Camp
Mario Velazquez do us all a favor and get out of trucking and yes in 32 years of driving I had one bad accident,lucky no other vehicles involved, it's not something to be proud of
Jun 19, 2016 8:22am

Alex Rosado
I am not condoning this driver's behavior, but according to the article, Total's driverS amassed 266 violations. Not just one driver. It is a sad deal regardless.
Jun 18, 2016 6:16am

Mike Francis
Remember that next time your on facebook driving. You have a family too woulb you want someone behind erin and jj in a truck or car playing on the phone not criticizing just observing
Jun 18, 2016 6:50pm