Truck Driver Gets Shot at After Giving Woman a Ride


Yet another story about a truck driver being shot at while on the road. Thankfully the truck driver survived but the chain of events leading to the suspects’ arrest makes this story stranger than all the rest. 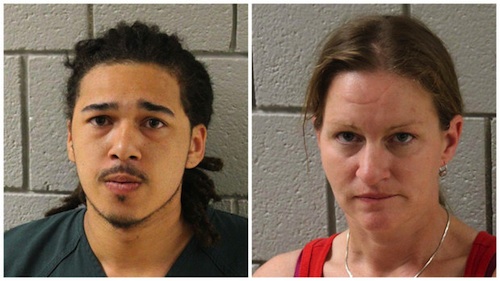 It began on Tuesday night when 43 year-old truck driver, Dana Ruchman from August, West Virginia was traveling southbound along I-81 around Middlesex Township. At around mile marker 78, he saw a woman standing alone on the road and stopped to give her a ride. She turned to be Aurora Abigail Curran, 36, of Middleburg, Va., and she told Ruchman that she had been riding with her boyfriend in his pick-up truck when they got into a fight and he basically “kicked her to the curb.” Ruchman said he let the woman ride along with him in the truck for a brief time while she borrowed his cell phone to call her boyfriend. At around mile marker 61, Curran then asked to be dropped off because her boyfriend was going to pick her again. According to the truck driver, he dropped her off as soon as she asked him to.

The truck driver continued on his way and then near Exit 52 at around 9:30 pm, a 2008 Ford F250 pickup truck pulled up beside Ruchman’s rig and someone fired a single shot from a .380 semi-automatic handgun. “The gunshot penetrated the passenger side window and the cab and impacted into the windshield directly in front of the victim," said the police report. The gunman turned out to be 23 year-old Tony Thomas (the boyfriend of the woman the truck driver had picked up and dropped off.) His cousin, Sean Thomas had been driving the pick-up and riding along with them, was Curran who allegedly told them the truck driver had tried to rape her.

When the three suspects were eventually arrested, Sean Thomas told police the “other side of the story.” He said that Curran and his cousin had been arguing in the truck and Curran asked to be dropped off on the road. About 10-15 minutes later, he said Curran called Thomas and asked for them to pick her up again. Thomas said when Curran got back in the pick-up, she seemed upset and told them that the truck driver had attempted to rape her. She then told them that he had thrown her in the back of the cab and threatened her, but didn't actually touch her physically. Sean Thomas also admitted to police that he didn't know whether to believe Curran, "because she is known to be dramatic and lies a lot." Moments later, Curran had alerted them that the truck driver was passing them on the road, and at that point Tony Thomas fired a shot at the moving rig. Sean Thomas told police he was "shocked and surprised" by his cousin's reaction, and not surprised when they were pulled over by state police about 20 minutes later.

Fortunately Ruchman only suffered minor injuries from the broken glass. He insisted to police that he didn’t assault the woman in any way and was only trying to help. He also said that he hadn’t been involved in any type of road rage incident with the pickup truck's occupants. Police seemed to believe the truck driver’s version of events. Thomas was charged with two counts each of aggravated assault and conspiracy (first and second degree felonies); propelling missile into occupied vehicle, a first-degree misdemeanor; and reckless endangerment, a second-degree misdemeanor. Curran was charged with riot and disorderly conduct.

Tony Filla
When I was a dumb young rookie driver this is back in 2003 I learned my lesson and I've never picked up a hitchhiker again I picked up a a young lady her car broke down so I offered to give her a ride to the next town I got pulled over by the Arizona State Patrol for just a random inspection I don't have a rider release so I explain to the officer her car broke down at mile marker and such and such and I'm giving her a ride to the next town He insisted on her ID along with mine Found out she had a felony warrant out of Bakersfield California when they pulled her out of the truck and handcuffed her they found a small amount of meth and a stem Well fuck me .. luckily for me she owned up to the drugs and paraphernalia and confirmed my story And then I got an ass reaming from our safety department And I've never picked up another mother fucker since
Jun 03, 2016 3:56am

Deb York
Never pickup a hitchhiker. Never. They can kill you. Or tell lie's that you raped them or anything. NOW more than ever is I would NEVER pick up a hitchhiker. World is nuts. Thank God the driver is ok.
Jun 03, 2016 7:11am

Wendell Yarbrough
If they're hitching, there's a problem with them. I picked up a few female hikers back in my younger days, they were all nuts.
Jun 03, 2016 12:09am

Shawn BigWash Washington
Never pick up strangers, we were taught that at a young age
Jun 02, 2016 3:07pm

Victoria Harshman
First off nobody wants to rape that ugly cunt!! Second he should never had picked her up ..ur working do ur Fuckin job in stop picking up women
Jun 03, 2016 4:18pm

Richie Oland
You foul mouth human being your typing makes you 3 times uglier then her you're pathetic
Jun 04, 2016 4:56am

Daniel Jackson
It doesn't say it happened in west Virginia, it says the truck driver is from West Virginia.
Jun 03, 2016 8:38pm

Shawn Hutchison
I'm not picking up anyone unless i know you,sorry for your luck,I'd rather be safe than dead..
Jun 04, 2016 9:04am

Donnie Crawford
Never pick up a hitchhiker, you could end up dead or worse . I never give anyone a ride, had a good friend killed back in the 90's by trying to help some girl get home.
Jun 02, 2016 5:02pm

Software Scripts
Absolutely love anything about
Jun 03, 2016 1:00am