As Chicago police continue to investigate  Thursday night’s shooting on the Dan Ryan Expressway, the truck driver’s daughter speaks out about his condition and uncertain future. 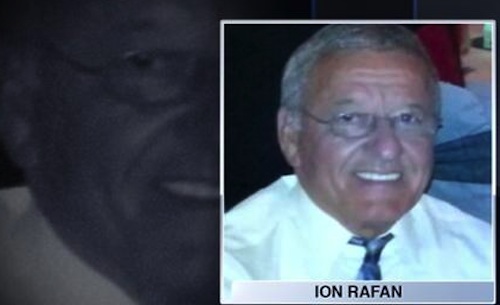 Ion Rafan, 68, had just finished a day on the job late Thursday evening and was heading north on the Dan Ryan Expressway to the location where he planned to park his rig and go home. Then just as he was passing the 95th Street exit, someone suddenly someone drove up and opened fire on his truck. A bullet came crashing through the driver’s side window and struck him just below his nose, then travelled up through his nose. Nearby motorists noticed his truck weaving back and forth between lanes and began calling 911 to get him help. Rafan was still conscious enough to pull his truck to a complete stop in the middle of the road and a Good Samaritan immediately stopped to assist him and help keep him conscious until paramedics arrived.

The truck driver was taken to Advocate Christ Medical Center in Oak Lawn and has been there ever since with his family by his side. His daughter, Alina Rafan, spoke to the media and said that her father is expected to survive but it will be a long and slow recovery. She also said that he is a hard-working man who didn’t deserve this and it's uncertain now if he’ll be able to return to the truck driving job that he truly enjoyed. "He loves his job. He loves what he's doing and it's really sad that something like that happened," she said. She also said that the family is devastated and hopes investigators will be able to provide them with answers to what caused this tragic, senseless shooting. “Whoever thinks this is funny or a game, it’s actually not,” Alina said. “You hurt families. You hurt people.”

Devan Carpenter
The saddest part is this happened in a city that has the strictest gun law in American now tell me that the shooter was a law abiding citizen.... I'm also sure that driver was in a gun free zone come on America open your eyes let's put someone in the white house that don't want to take your guns ..... Feel Sry for this family
May 23, 2016 6:35pm

Tony Lazzara
I grew up in Chgo, drove a truck in Chgo, had them open trailers doors, jump on the steps ,on State st by the old projects they would roll a baby buggy in front of your truck to get you to stop , I crushed a cple of those
May 24, 2016 4:22am

Gary Steffan
I'm staying as far away from Chicago as possible, I think when that trucker was killed at the flying j now the loves that was it for me shot right in the face as he sat in the drivers seat
May 25, 2016 10:10am

Bruce Bautch
Sad that the IHP, is so issued with handing tickets out for trucks impeading traffic when cars are going 15 over. Maybe they could step up enforcement on the cars a little and get some of these loser thugs off the Dan.
May 24, 2016 9:37am

Juan Huerta
Remember Chicago is a free gun zone! What a joke that law is. Hoping for a speedy recovery for the driver.
May 25, 2016 7:30pm

Juan Huerta
This is why i carry my pistol no matter where i go! I am gonna shoot back if fired upon guaranteed!
May 25, 2016 7:31pm

Randy Rekow
Know that has to be a tough one. In the face...his pain must be outrageous. Even with morph it's not gonna be a easy ride to say the least. Think shooter-boy needs to 'feel the burn' himself but his punishment really should be set by whatever this driver wants done to him, not some court. That would be justice.
May 25, 2016 10:03am

Del Walton
You can't make so many pay for ones stupidity. The little bastard will slip up sooner or later and when he does I hope it's a truck driver that runs rite over his punk ass! And then backs up to make sure the little prick doesn't get out alive. I hope he's nothing but a grease spot when it's done, then they can name that stretch of road after him with a picture of his grease spot. Is that too harsh?
May 23, 2016 5:38pm

Adam McDonald
Of course, this wasn't taken in Illinois, since they don't honor my Wisconsin (or anyone elses) permit.
May 24, 2016 8:32pm

Ron McClain
If the people of Chicago are OK with this, perhaps it's time to quit delivering freight, groceries and other goods to Chicago. Until them worthless Chicago bastards get control of that cesspit on the lake.
May 24, 2016 4:26am

Brad Donovan
Please you all keep eyes open if you have to take out the car to save your life do it. Also put clear tape on Windows this will help keep the glass from shattering
May 23, 2016 4:11pm

Brian Morris
Shame all drivers should refuse. To deliver or pickup loads in that godless hole
May 25, 2016 11:16am

David Hackney
Hope they catch the worthless bastard, and hang his ass from a highway bridge!
May 23, 2016 4:29pm

Cheryl McKnight
Praying for the victims; their family's; that this/these evil person/ people be caught!!
May 24, 2016 5:57am

Rick Kempke
Hell, it could've been another truck driver. It's hard telling. I don't think they've got any vehicle identified in the shooting.
May 25, 2016 8:46am

Software Scripts
posts like this are why everyone loves your page
May 24, 2016 8:30am