On Sunday, a truck driver led police on a 100-mile high-speed chase, closing Interstate 40 in both directions from Kingman to Ash Fork, AZ. The chase finally ended with a combination of road spikes, missed gun shots and a K-9 bite. The truck driver was taken into custody with non-life threatening injuries and is now facing a slew of felony charges.  Unfortunately and unfairly, it's these rampaging types that sometimes cause people to perceive all truckers in a negative way. 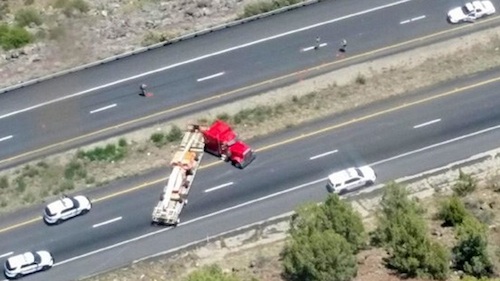 According to the Arizona Department of Highway Safety, the pursuit began at around 8:30 a.m. Sunday morning when motorists began calling in to report a tractor-trailer driving erratically on Interstate 40 near the California border. The driver, Raul De La Rosa Giron, 36, of Texas had been heading to California and was reported to be driving through a rest area at 80-90mph. Then more calls came in saying Giron had crossed into California, exited the interstate and then re-entered heading east into Arizona. DPS said units caught up with the big rig and began their pursuit around Kingman. Rather than pulling over, Giron led authorities on a chase pushing his rig up to 100 mph and dangerously passing motorists using the right shoulder of the road. Troopers and deputies were forced to close the interstate in both directions, which backed up traffic for miles. They eventually set up road spikes on the road, which finally did the job of stopping the big rig. "For close to 100 miles troopers and deputies from Yavapai and Mohave counties tried to stop the commercial vehicle with stop sticks (a tire deflation device)," said the DPS. "Finally, near Ash Fork, the vehicle was successfully spiked and stopped." 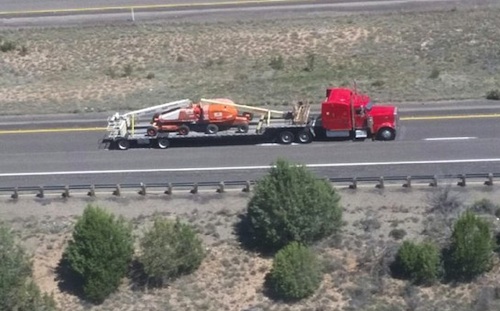 But the action didn’t end there. Giron stopped his truck in the middle of the interstate and fled on foot. According to DPS, the troopers chased the suspect but became threatened by his actions when he stopped and "engaged troopers with an item he simulated as a weapon." It was later determined that the truck driver was pretending his cell phone was a gun and it was enough for one trooper to start firing his weapon. Four shots were fired at the truck driver and fortunately for him, he dodged the bullets. Instead a police dog was deployed and bit the suspect, finally taking him down. Giron was apprehended and then taken to a Flagstaff hospital to be treated for the non-life threatening injuries caused by the K-9. 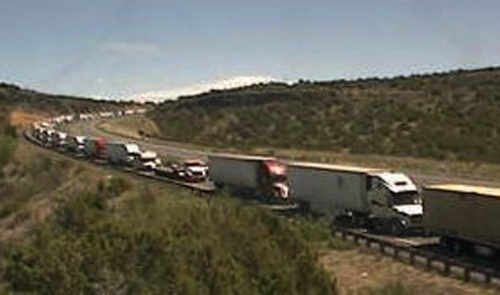 Giron was booked into the Coconino County jail on felony charges, including three counts of aggravated assault on a police officer, felony flight and resisting arrest, along with misdemeanor DUI-drugs. DPS believes Giron was under the influence of drugs and that the incident was a possible "suicide by cop" attempt. He was scheduled for his first court appearance on Monday at 10 a.m.

Both directions of Interstate 40 near Ash Fork was closed for four hours and then one lane in both directions re-opened at around 2:40 p.m. Finally at 9:30 p.m. all lanes were reopened.

Trucking Unlimited
wow - you saw it first hand! sounds like he probably was on something to be "enjoying" a police chase!
May 17, 2016 1:13pm

Corey Lormand
Marty was driving..when they started shooting I woke up and had no idea what was going on.
May 17, 2016 7:57am

Travis Moulton
Dumb idiot need to go to jail for awhile because of him is why we have a bad reputation
May 17, 2016 4:18am

James McCreight
Is there an updated article about this situation? Anyone?
May 19, 2016 7:50pm

Michael R. Beals
Can't even open these stories anymore without being bombarded by some Bull shit company trying to offer you a bottom of the barrel job
May 16, 2016 6:37pm