After thousands of retired truck drivers gathered in Washington on April 15th to protest cuts to their pensions, it seems their voices were heard. On Friday, the Treasury Department announced its decision to reject the Central States pension fund's request to cut retiree benefits. The announcement brings great relief to the hundreds of thousands of truck drivers, warehouse workers and other union members who’ve been fearing their monthly retirement budgets were going to be reduced by up to 70 percent. 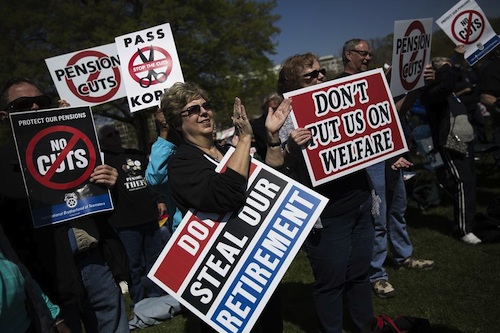 Central States represents about 400,000 members and has been facing a financial crisis over the last several years. Decades ago, there was a ratio of four active job holders contributing to the retirement plan for every retired or inactive member. However, the numbers have almost reversed and in addition to the fact that fewer workers are paying into the pension, the nation’s economic crisis and a variety of other factors have drained its funds. Central States claims it proposed the pension cuts as a “gut-wrenching” but necessary decision because it "provided the only realistic solution to insolvency."

While it is extremely rare and obviously unfair for anyone to have their hard earned pension benefits reduced, a federal law was implemented in 2014 that allowed these certain types of cash-strapped multi-employer plans to make cuts. But mediator, Kenneth Feinberg, who had reviewed the Central States proposal said he rejected it because “the overhaul was based on rosy investment return assumptions, uneven cuts among retirees and a flawed plan notice to recipients." He added, “We at Treasury do not believe that the plan as submitted will reasonably avoid insolvency.”

Whatever the reasoning was, those affected are obviously happy with the Treasury's decision. “It brought back everybody's faith in government. I've had six guys tell me that," said a former president of Teamsters Local 407. “The decision today, rightfully and justly, will require a re-evaluation and reset of how to protect the hard-earned pension benefits of 270,000 Teamster retirees,” added U.S. Rep. Marcy Kaptur (D-Ohio).

But the momentary relief does not end the initial dilemma. The fund says it will run out of money within 10 years if nothing is done. Today’s decision may simply force retirees, current workers, employers and the fund back into negotiations or congress may also have to get involved again. Some Democrats are already discussing solutions such as ending certain tax breaks for the nation’s wealthiest in order to keep the pension fund and the commitments made to retirees.

Robert Custer
70% cut is a pretty steep cut. Glad the government stopped it. Those guys worked hard for that pension, almost criminal to take almost all of it away from them.
May 07, 2016 5:06pm

Rex Gates
Looks like all the money "Big Union" spend on lavish salaries for themselves and political donations to Democrats only hurts their workers they "say" they represent. #UnionTools
May 08, 2016 8:42pm

Rick Kentaft
Time for the Teamsters to get off their asses get out there and organize the drivers to show them how they are getting screwed over. Fight for the drivers make being a union driver worthwhile
May 08, 2016 11:07am

Rick Kentaft
Well lets see how many are sitting waiting to get loaded or unloaded and not getting paid? How many are on duty not driving but told to log it off duty? How many total hours are they spending in a truck and not being paid ? How many are being fired with no one to fight for unfair terminations?
May 09, 2016 4:53am

Michael Goben
It's a temporary win. What are you going to do when they file bankruptcy and you have no money
May 08, 2016 8:48pm