Police are searching for a big rig driver accused of fleeing the scene of a deadly crash in Vernon, California on Saturday. Authorities say that he was first involved in a minor accident, took off from that scene and then ran a red light, which caused him to collide with a pick-up truck. The passenger of the pick-up was pronounced dead at the scene. The big rig driver unhitched his trailer and drove away in his cab. Unfortunately, it’s these irresponsible types that often give all truck drivers a bad name. 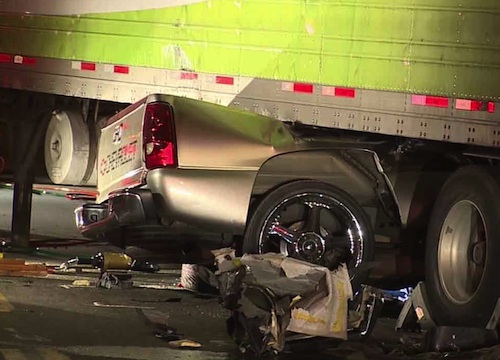 According to police, the incident occurred at about 3:10 am Saturday morning near 37th Street and Santa Fe Avenue in Vernon, CA. Authorities say the semi-truck was first involved in a minor crash around that location and several witnesses saw the truck driver flee the scene of the initial incident. Some had even followed the driver and saw him run a red light, then crash into a pick-up truck. Tragically, they also saw the semi-truck drag the heavy pickup truck for several feet before stopping. The truck driver then jumped out to unhook the cab from the trailer, jumped back in the cab and fled the scene. Authorities later found the trailer's cab abandoned in a parking lot on 26th and Soto streets. A nearby restaurant employee said she found a 12 pack of beer next to the cab with two missing.

When authorities arrived at the crash site, the truck driver was long gone and they found the pick-up truck mangled underneath the trailer of the big rig. Both the driver and the passenger of the pickup were trapped inside and firefighters used the Jaws of Life to remove them from the wreckage. Police say the driver of the pick-up was transported to USC Medical Center in stable condition and is expected to recover. However, the passenger of the pick-up did not survive the crash and was pronounced dead at the scene. On Sunday, the Los Angeles County Department of Medical Examiner-Coroner identified the man as
Armando Murillo of Pacoima, CA. He was only 28 years of age. 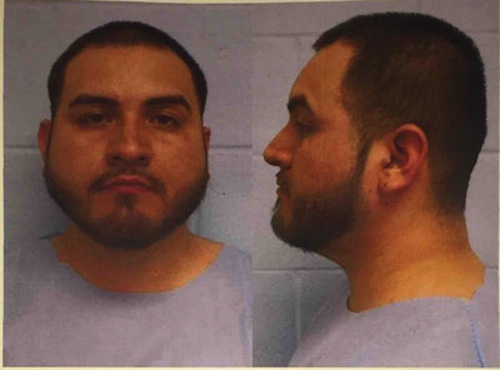 Investigators have been piecing together witness statements and working to find surveillance footage that may have captured the truck driver who fled the violent scene. Police announced they are searching for Guillermo Ortiz Jr., and are calling him a “person of interest” believed to have information on the crash. At this time authorities say he is only wanted for questioning. No details have been released regarding whom the truck driver worked for or whether or not he was on the job when the incident occurred.

Michael Goben
Hang the driver. He gives the rest of us s. Bad name But mostly he murderd someone. 1st degree murder
May 02, 2016 3:12pm

Dan Weaver
People do dumb shit ALL THE TIME, however dropping the trailer and attempting to evade the scene?? What if dropping that trailer made the difference between life and death?? What if backing off the car allowed the passenger to be rescued quicker and they lived?? 1st degree all the way.... the problem is the pussy states that no longer carry out the death penality.... sorry to say it, but more people need to be put to death for their crimes. Make the world a better place to be rid of such filth.
May 04, 2016 1:38am

Ryan Callahan
My company had a similar kind of incident with a fleeing cali truck driver. Hurt a employee then fled the scene without his truck.
May 02, 2016 5:26pm

Gary Steffan
What a xxxxxxx idiot guess he didn't know the cop can track him down by checking the trailer plate. That's how I got the truck that took my front end off of my Pete when I lay sleeping
May 02, 2016 5:14pm

Kirk Righetti
Don't look for a trucker...obviously this is a rookie long haul driver...I'd start with the mega fleet corporate carriers, sounds like one of their geniuses
May 02, 2016 2:06pm

Robert A. Luthart
Umm... mega fleet carriers often know which truck and driver is associated with any given trailer... nice try though.
May 03, 2016 7:32am

Kirk Righetti
Um maybe read the comment, if confused ask to explain...I basically said I'd would start with the mega fleets when looking for this guy...a comment you seem to be in agreement with. Amd to correct you, I use to work for mega fleets amd they often lose their equipment. Mny times I would get a message sayin if you see this trailer contact dispatch cause they don't know where the crap is. Go troll someone else. And if you ran with a mega fleet you know all to well you rarely run with the same trailer if ever.
May 03, 2016 8:21am

Aaron Smith
Guy Haggard take your pro elog stuff and go fuck your self. The effects of e logs and clowns racing through construction zones, slow speed limits in towns, and truck stop parking lots are far more dangerous than someone running paper logs. Come up with something new, you don't have a fucking clue.
May 03, 2016 10:27am

Kirk Righetti
Any driver that feels elogs are a good thing...has never driven a truck correctly, amd is losing money out ur but. Elogs have no bearing on safety...if anything makes it more unsafe...and same bout the mandatory 30 min break...seriously the most dangerous hour of driving is the first one any driver knows this
May 03, 2016 1:36pm

Mudder Mike Ritzel
Gay Haggard stop defending your brother and do the right thing and turn him in for killing that man
May 03, 2016 8:15pm

Kirk Righetti
I've run paper amd elog...and the way shippers and receivers are it's getting to the point that team driving is the only way. Running solo elog I've run out of time all the time and the law was called cause I won't move the truck...several times I have had a escort by law enforcement to a "save haven" due to some shippers taking so long to load me or unload me and then telling me I can't stay on the property. If you see this as cheating a log...my guess you haven't run truck that long.
May 04, 2016 9:28am

Kirk Righetti
I'll tell you the type of drivers that are giving us a bad name...those that drive truck like it's ur personal vehicle, racing to get ahead through construction zones...making it difficult for others to pass ...those that wear shorts and sandels...those that don't respect others or the road.
May 04, 2016 9:31am

Cole Walker
Guy and all your elog pushing assholes, if you have no fuckin idea what it's like running paper then klshut your mouths, when I'm going through a busy city 90% of the trucks doing 10 over and creating headaches are you elog douchebags.. when I'm crawling down a mountain, guess who is burning up their brakes hauling ass down it?? You elog asshats. Because your racing that countdown timer. I myself hate elogs, because I like my freedom. And most paper guys are driving in a respectable Manor, because if they get in an accident they are a criminal until proven innocent. You think elogs are so great, but yet your more of a hazard then you know. You yourself are more fatigued the a guy running paper. O your sick and need to take a nap?? That's to bad because your racing that timer, and being more of a hazard. So take your paper log comment and shove it up your ass ya prick.
May 04, 2016 3:59pm

Kirk Righetti
I really hope ur not referring to me as a asshat...lol, I rather run paper...Elogs are for those that still need their moms permission to go play. I do wish the respect of the road amd trucker code would come back. Really starting to get tired of being cut off by big rigs bad enough 5 wheelers do it.
May 04, 2016 11:54pm

Kirk Righetti
you won't see a trucker wearing surf shorts and flip flops that for damn sure, like they are ready for the beach not driving the interstate. An actual trucker is respectful, dresses for the job...any questions...lol
May 05, 2016 10:37am

Carolyn Larsen Harmon
How do you leave people trapped under your trailer??? What kind of human being can even do that??? Illegal or not- drunk or not- to just leave them??? Special place on hell for him
May 03, 2016 10:18pm

Rebecca David
Perfect reason why not just anyone should or be allowed to be a trucker.maybe if they did more intense classes/training it would get people like him off the road.
May 05, 2016 10:14am

John Everline
Maybe he doesn't know that when they find him, and they will. There will be more charges. This is not a good look.
May 02, 2016 1:18pm

Christopher A Whitmire
Donald Gough yessir I'm sure there are cameras everywhere he was.They'll get him if he hasn't crossed the border
May 02, 2016 2:21pm

Christopher A Whitmire
Jerome Charles Mark Jones Marshall Kennedy Joshua Breeden Sr. It's stuff like this that give us all a bad name
May 02, 2016 12:43pm

Twin Valera
1st minor incident left the scene took a red light witneses seen him caused the pic up truck to deadly crash into him then leave and was deinking...
May 03, 2016 11:05am