As Barbara Baxter continues her fight for  truck drivers' paid meal and rest breaks, on Thursday Minnesota congressman Rick Nolan and Sen. Al Franken led several other politicians and over 1,000 retired Teamsters in a protest against a proposal by the Central States Pension Fund that would cut retirement checks of 272,600 Teamsters members. The protestors gathered on the Capitol’s West Lawn and made their voices heard. “Stop those cuts! Stop those cuts!” they chanted. 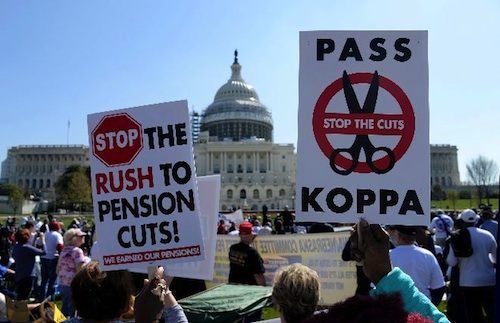 The proposed cut is in response to the Central States Fund losing its funding for a number of reasons. Since 1980, more than 10,000 employers have stopped contributing to the fund because they either went bankrupt or out of business. Investment losses during the Great Recession have also caused other businesses to stop contributing to the fund. At the same time, the number of retirees is steadily rising while the union membership has been decreasing and it’s created a situation where more Teamsters are drawing retirements rather than contributing to it. At this rate, some predict the fund will be gone within the next ten years. The Central States Fund retirees will learn their fate in the first week of May when mediator, Kenneth Feinberg is scheduled to rule on whether the proposed cuts are legal under the 2014 Multiemployer Pension Reform Act. 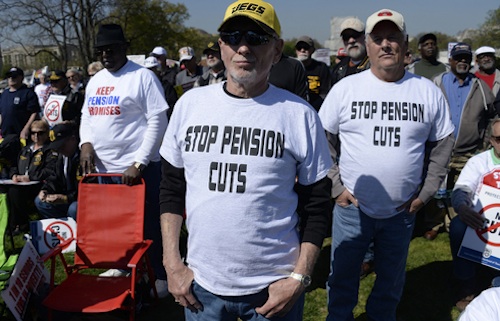 Nolan was once a Teamster himself and has been taking the protest further than most of his political colleagues. On Thursday he met with Feinberg and later made a public statement saying he was “cautiously optimistic” the cuts would be rejected. However for the retired Teamsters at the rally, cautious optimism isn’t enough to appease their worries. “I’ll lose everything. “I’m 75 years old, and I’m going to lose my house,” said Pete Lomonaco, a retired Georgia truck driver who is expecting to lose 61 percent of his pension. Del Viehland is a Missouri Teamster who said he knows of retirees that stand to lose 70 to 75 percent of their pensions. Ray Brofford is a 73-year-old retiree from Columbus, Ohio, and says he’ll be forced to go from $2,600 a month to $1,289. “After you’ve worked for all those years, your feet are cut out from under you,” added 63-year-old Mike Waters of Illinois. “You’ve worked all your life, and your pension is your lifeboat, and they’re puncturing holes in it and changing laws.” 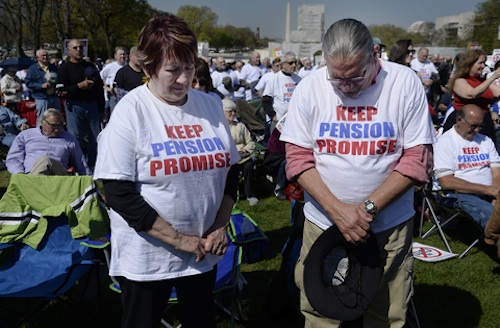 Thomas Nyhan, executive director of the Central States Pension Fund, issued a public statement attempting to acknowledge the retirees’ concerns. “We understand that these proposed benefit reductions are painful for our participants. Nobody wants to reduce benefits, but the simple fact is that this rescue plan is the only way to save the fund and ensure that we are able to pay benefits in the future,” he said. James Hoffa, president of the Teamsters union, also made a statement saying he is working on the passage of legislation to help his members. “Legislation will help us address the problem. But the biggest thing is to defeat Central States’ proposal. That’s what we have to defeat.”

Randy Rekow
Teamsters has been a con for so many years now, just like America is a con, it started with the right idea then sold out almost immediately when those 'at the top' went unsupervised!! We just keep doing it to ourselves over & over.
Apr 16, 2016 10:32am

Lee Wade
It was their own union that screwed them not the government. Unless they want the taxpayers to cover there loss of union money. Hell no.
Apr 16, 2016 8:01am

Rick Manning
Congress and NLRB are the ones who make the decision to allow pension cuts. And seeing as how the NLRB and unions are all in bed with each other cuts at least are going to happen
Apr 18, 2016 3:24am

Tony Sr Ahlers
Time for another Hoffa disappearance. Only this time with money. Union has your back. Yeah right.
Apr 16, 2016 8:53am

William Seifert
They can thank the leadership of Fitzsimmons who was a bag boy for the mob and screwed the rank and file...I was briefly in the teamsters twice.....they threw me under the bus both times.....
Apr 16, 2016 9:45am

Rick Manning
This is exactly why the teamsters are after the fedex corporation
Apr 18, 2016 3:22am

Chris Seiley
Damn just screw everyone over but the ones who deserve it
Apr 17, 2016 6:58pm