Street Racer Pleads 'Not Guilty' In Crash That Killed 3


While the hunt is still on for the second driver involved in the street race that killed a UPS driver and two teenagers, the driver who triggered the multi-vehicle was in court last week and pleaded not guilty to the three counts of second degree murder he's been charged with. His defense team also requested that his bail be lowered from $6.2 million to $250,000. 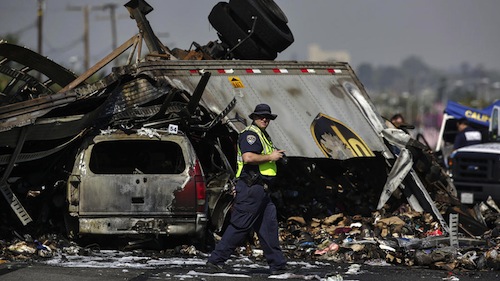 Dealio Lockhart, 35, of Whittier, CA, was arrested at the scene of the deadly 5 Freeway crash on February 27th and was charged with three counts of second-degree murder and four counts of reckless driving on a highway causing injury. Lockhart has been in custody since his arrest and on Wednesday his defense lawyer, Dmitry Gorin also asked that his $6.2 million be lowered to $250,000, arguing that the defendant "had no intent to hurt anyone" and what happened was "an accident." Gorin told the court that Lockhart has no prior criminal record and had a very productive life as a college graduate who worked as a field producer on the TV show "Dancing With The Stars." The judge was given a package of three-dozen letters from those who knew and had worked with Lockhart, vouching for his character. Outside court, Gorin also stressed to reporters that his client cooperated with law enforcement after the crash and is "truly remorseful over the consequences." 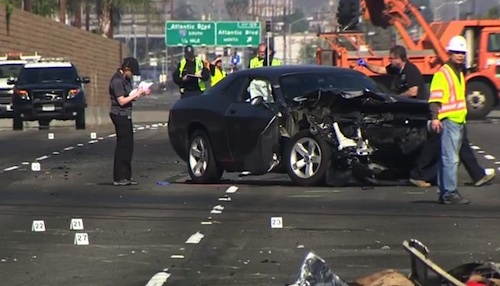 However, Deputy District Attorney Michael Blake fired back saying that Lockhart was "playing Russian roulette" with his 4,000-pound Dodge Challenger, traveling at 127 mph 2 1/2 seconds before the crash. The prosecutor also pointed out that the race extended 11 miles from Beverly Boulevard to Washington Boulevard. "This was not a situation where you're dealing with an empty freeway," he said. According to the California Highway Patrol investigators, both “Dodge muscle cars were being driven aggressively, with the motorists jockeying for position near the Citadel Outlets.” When Lockhart approached a vehicle moving at normal freeway speed ahead of him, he tried to swerve around it but wound up losing control of his car. His Challenger hit a UPS 18-wheeler, which went airborne and over the center median, shearing off the top of an oncoming Nissan with four people inside, the CHP said.

Los Angeles Superior Court Judge, Upinder Kalra heard both sides of the argument and ultimately denied the defense’s request to lower the bail amount. While the judge said he did not doubt that Lockhart had engaged in a "very positive life" in the past, it did not change the consequences of his actions that night. The crash killed UPS driver, Scott Treadway, 52, and two students Michelle Littlefield, 19, and Brian Lewandowski, 18. The other two people in the Nissan were critically injured and remain hospitalized, as the prosecutor pointed out to the judge. Two other people were also injured as a result of the crash. "Good people do bad things, and there are consequences," the judge said.

Meanwhile, authorities are still searching for the driver of the Dodge Charger who fled the scene. They are offering $36,000 in reward money for information leading to the driver’s arrest.

Khori Carnes
I hope they fry is fucking ass. Can you get the death penalty for vehicular manslaughter? When it's 3 people killed due to your stupidity?
Apr 12, 2016 3:50am

Kevin Davis
I'm willing to bet if his car hadn't been totally disabled he would have left the scene also. Good for judge not lowering bail.
Apr 12, 2016 7:38am

Gail Barie
That was exactly my thought. He couldn't flee the scene so he got screwed. The other motorist needs to get some balls and turn themselves in. Why should one person take the rap for all responsiblity. 35 years old should have known better........no way should they let up on any of his punishment....
Apr 13, 2016 6:46am

Terry Perrott
Rather than frying this guy,I believe witch way the 3 people that died he should die the same way! !!!!!! I know it sounds harsh but would be saved the tax payers a lot of money. ..Why should he sit in prison get three meals a day.
Apr 12, 2016 8:41pm

Manny Mcintyre
Let him rot! I would rather see him get the death penalty but I think he should suffer in federal prison.
Apr 12, 2016 8:05pm

Terry Perrott
I have a sister that works at a prison & your jaw would hit the floor if you found out how much it cost per inmate.Its us like me that work , us tax payers that pay for the cost of someone to sit in prison .
Apr 13, 2016 10:34pm

Mandy Brown
I know it's how it works but any compassion I might be able to muster is lost when they plead not guilty.
Apr 11, 2016 11:28pm

Jason Scholbrock
Make him do very hard time in person loss of life u can't bring back thots and prays go to the famliy tht lost there love ones to me hard part abt doing this job u gt to be ready for anything out here ya thro the book at him or just gas him it don't Chang things wht all ready happen it's up in God's hands now
Apr 13, 2016 10:54am

Chris Seiley
I hope they get the other one too. Hang em and use them as an example for all the other kids wanting to try that.
Apr 13, 2016 4:31pm

Marcel Reed
Throw the book at the sombitch! How the fuck you gonna plead not guilty when they caught your stupid ass? !
Apr 12, 2016 9:12am

Divanildo Quirino
Duck what he does for a living he is on a hwy you have rules to follow give him the chairs dumb ass
Apr 14, 2016 5:30am

Software Scripts
posts about are why everyone loves facebook
Apr 12, 2016 12:00am