One truck driver is dead and two are seriously injured after two separate crashes involving all three semi-trucks occurred on Interstate 84 in eastern Oregon on Tuesday. 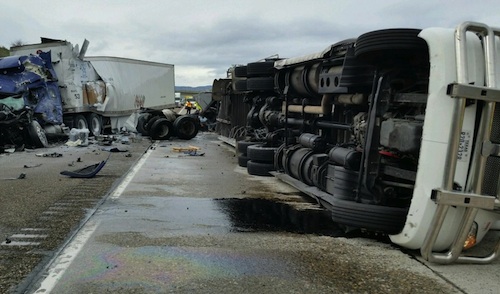 While the crashes are still under investigation, Oregon State Police say that the first incident happened at about 11:25 a.m. and the second happened only 30 minutes later, at approximately11:55 a.m. Police are still unsure of what caused the first semi-truck to veer off the road, but the truck driver had been traveling east on Interstate 84 and veered into the median. He then drove back onto the interstate, where his semi overturned and blocked both eastbound lanes. When police arrived at the scene about five minutes after the incident occurred, the semi was already on its side and blocking the eastbound lanes of I-84 near milepost 349. It was also causing traffic to back up for miles behind it. 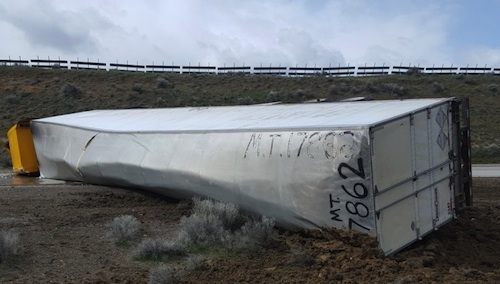 As police were responding to the initial crash, their job became far worse when a second crash occurred just half an hour later. A semi truck hauling hazardous materials crashed into the back of another semi that had already stopped for the first crash near milepost 348. According to police, the approaching semi was traveling at highway speeds when it crashed into the stopped truck ahead, making the impact that much worse. Tragically the driver of the moving truck, Milton Vaughn, 62, of Altoona, Kansas, was pronounced dead at the scene. The driver of the semi he hit, 33-year-old Abraham Garza Tanguma of Texas, was taken by ambulance to a nearby hospital and the driver of the first overturned semi-truck, 34-year-old Ivan Berezin of Gresham, was airlifted to Saint Alphonsus Regional Medical Center in Boise.

Michael Scherer
Because driving on falsified paper logs is somehow so much safer.......so bored with whiney fucks who can't manage their time so blame a clock
Mar 16, 2016 11:41pm

Benny Bembenek
Look at the statistics. More accidents happened with elogs than not. So what's the conclusion with that???? Big brother my friend! ! Don't want it or need it!!
Mar 17, 2016 5:27am

Benny Bembenek
Fuck you mr. Fields. No crying here just facts. And I did not ask for your permission to drive my truck. You can go fuck yourself. Have a nice day. Try using logic once.
Mar 17, 2016 6:21am

Gary Steffan
I have to speed every where through towns etc, elogs belong to city drivers or paid by the hour I lose 1 to 2 hrs every day and sitting now is a regular thing to do I feel like a government work Lazy ass government worker, years ago I did 4000 miles a week now if I'm lucky 2500
Mar 17, 2016 7:39am

Benny Bembenek
So the elogs guys who operate a truck. Not everyone has a perfect day every day. So if u can run the miles u say. Good for u!! I would prefer to make my own decisions as to how and when I drive. If you smart planers like being told to go to bed and get tucked in by ur Driver manager or mommy!! Good for u!! What part of not needing the government tell me or teach me how to Truck or run my business is leading u to think I am an idiot or whiny ass?? If the children on here like that have at!! Like I said before don't want it or need it.. I actually like to run less miles and get paid more. Not this shit where u have to run a ton miles to make 1000 bucks after fuel and lease payment.!!! As for running x amount miles with elogs. Learn how to use a calculator. 70 hrs a week minus 2.5 hrs for loading and unloading =67.5 multiply 55 mph = 3712 miles per week. Somebody show me who can maintain this consistently every week. This comes out to 178000 miles a year, with one month off !!Look at ur w2 How many miles did u get paid for??? You can not average this kind of speed!!!This is why elogs guys never want to have any respect for anyone on the road or in parking lots. Got to go!!!! No time for that!!!!! Good day gentlemen! !!
Mar 17, 2016 7:47pm

Jason Stearns
Benny Bembenek...I'm not a lease guy but an actual owner. I make 6 figures a year and I'm not out running illegally or dangerously.I'm not harassed by the dot,my elogs are like paper logs but just electronic. Stop bitching about something you know nothing about.
Mar 18, 2016 11:20am

Kenny Harman
You know all of this has to do with how and when you get loaded and unloaded and drop and hook 30 plus years in trucking and bigest problem is school drivers not getting enough info about different loads and e logs do cause accidents and drivers to quit business thats why everybody hurting for drivers but so does not planing a run and not informing dispatch you cant make a ceartian time come on folks be smart we all been there done that and what freight pays at diff companys effects us all in my business its paying the same now as it was in 2000 its a little hard to make what i use to back then now lets get people that know this business to make laws and rules not some insurance company or idiot that dont know about the road truck stops shippets receivers construction or accidents that effect us
Mar 18, 2016 1:13pm

Sue Domenico
I really don't mind the e-logs. I have seen many OO who do not run elogs running like they are in a major hurry. We are all guilty of shit in one way or another. My pet peeve is the f'in cell phones. I watched a truck past me texting then over to the breakdown come back go over the other way. He was back and forth all over the road. RIP driver
Mar 18, 2016 4:39pm

Tammara Beard
I run elog and would never put myself or others in danger it's all a pure matter of doing the right thing and using your heads
Mar 18, 2016 8:36pm

Heidi Lyn Oestreich
This is why ALL drivers should have and use their CB radios so they KNOW what's ahead along with Looking ahead into the distance to KNOW what you are coming too. We are seeing WAY TOO MUCH of these type of accidents out here! Let's all get back type Driving to Stay Alive and let's turn those CBs on so you know what is ahead of you!!!
Mar 16, 2016 2:01pm

Timothy Begle
Won't it be better to just look out the windshield? If somebody else has to drive your truck wirh their CB radio you're screwed.
Mar 16, 2016 6:53pm

Michael Mathews
Looking out windshield good idea. Having a cb n turned on so u know of a problem 2 or 3 miles ahead of you PRICELESS
Mar 16, 2016 8:32pm

Nathen Sinclaire
CB radios are pretty much useless in modern trucking business either nobody has them or you only hear idiots talking on them I tossed mine out years ago
Mar 16, 2016 9:41pm

Jason Stearns
All of you idiots are the same ones that get on the cb (that you're bitching about) when you're stopped and start asking...whats going on? What lane? What is the detour? And so much more. Get out of trucking if you can't handle being a trucker. Oh and put your phones down
Mar 17, 2016 6:43pm

Craig Savage
Who wants to listen to the CB anymore when all you hear is swearing, and every language BUT English!
Mar 18, 2016 9:19am

Bryan Welsh
All I can hope for now, is to just hopefully meat a nice man behind bars that likes to paint, and play solitaire with me.
Mar 17, 2016 5:18am

Tammara Beard
Stop tailgating and thinking you own the road. Truck drivers are pushy and I'm a truck driver and it is uncalled for. Cars put us in enough danger but the way you drive don't help.
Mar 18, 2016 8:34pm

Kris Carter
So much for respecting a fallen truck driver. We'll throw now hiring drivers ads on the photographs of the downed trucks!
Mar 18, 2016 6:32am

Mike Wilhelm Sr
One truck accident in pa that day we need to ask ourselves how many car accidents happened that same day in pa that took lives. Amazing thats why truck got such a bad name. Its noticed for cars because its an everyday thing. Thats a shame
Mar 18, 2016 2:58pm

Ron Steven Smith
It is getting harder, the schedules seem to be tighter and its getting more restricted meant for safety but is it really working
Mar 18, 2016 6:22pm

Gary Rogers
I drove that section of I-84 every Tuesday for 6 months, it's a dangerous, speed restricted, section of tight curves. Easy to get stung.
Mar 18, 2016 5:13am

Dan Mavis
I sat out there in Baker Oregon for about nine and a half hours where they clean that up that was too bad
Mar 17, 2016 8:33pm

Tammara Beard
Speed limits only a select few follow them and even less in construction
Mar 18, 2016 8:39pm

Joe Swett
If everyone used a radio properly you are aware of what's ahead of you. It gives you more time to react, plan, reroute, etc.
Mar 18, 2016 1:58pm