A truck driver was arrested after his botched attempt to use a fishing line to bypass the E-ZPass tolls on the New Jersey side of the George Washington Bridge. 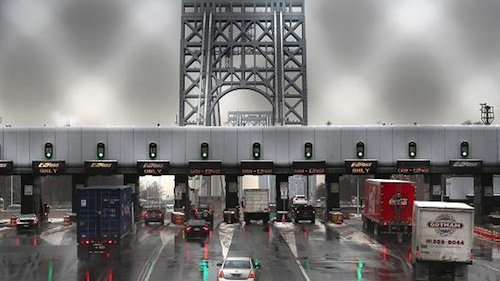 The incident occurred Wednesday evening at around 7:15 pm when an official saw a tractor-trailer with no front plate and the rear plate bent to avoid being scanned by security cameras. When the E-ZPass sign indicated that the truck driver had not paid the toll, police were alerted. When they pulled over the semi-truck, police officers then discovered a fishing line contraption rigged to the truck. "The vehicle's front plate was rigged on a hinge with monofilament fishing line that ran into the cab and ended on the dash where the suspect could control it to conceal the plate [pull it up out of view], and then restore the plate into view after exiting the toll and security cameras," said police spokesman, Joe Pentangelo. 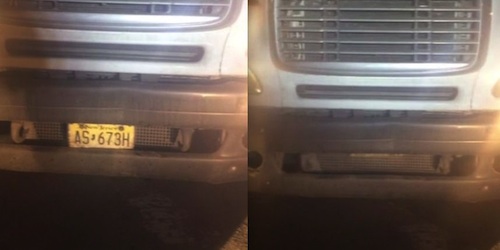 Javier Marte, 41, of Yonkers was arrested and is now facing multiple charges that include theft of services and tampering with public records. He has also been charged with possession of burglary tools because he "used the line to facilitate the crime,” police said. Considering the cost of the charges incurred on him now and time lost from his job, Marte is now likely wishing he would of sucked up the $126 charge he would have paid without E-ZPass at that hour.

In February 2015, another truck driver was arrested in a similar attempt to bypass the George Washington Bridge E-ZPass tolls. Pablo Ortega of Queens had entered the toll lane with his "James Bond-styled" big rig and authorities quickly clued in. “The vehicle's front bumper was hydraulically lifted, which made the front license plate impossible to be viewed by E-ZPass cameras. The rear plate was also obscured with grease and unreadable,” Pentangelo said. Apparently Ortega pressed a black toggle switch on the vehicle's dashboard to mechanically move the bumper - the sophisticated spy-style kit had cost him about $2,000. The owner-operator had been transporting Gummy Bears and was also charged with tampering with public records and possession of burglary tools.

Phil DeVeau
The point of a toll should be to maintain the road, fixing damage, safety inspections, pay for bridge workers, a reasonable profit (if it's a private road), etc. If $126 accurately represents the cost of crossing the bridge then I'd agree with the toll. If the $126 is a hidden tax on goods crossing the bridge where NY is basically taxing goods at every stage as often as possible that is a different story. I don't see how $126 could possibly represent an accurate cost of crossing the bridge, so I expect it's yet another hidden tax.
Mar 13, 2016 6:17am

Shannon Holbrooks
All the truck drivers that go into that shithole should stop for 2 days and the price of that damn toll would come down.
Mar 13, 2016 4:33am

Chuck Frank
If you take notice when get thru thru the toll booths, there is a small sign that reads "Bridge condemned. Travel at own risk."
Mar 11, 2016 9:25pm

Ted Mckenney
If the fucking greedy government corporations didn't charge such huge toll fees , people wouldn't have to resort to such tactics . I remember when it was $5. to cross that lousy bridge.
Mar 14, 2016 6:28am

Penelope Townsend
Lol bet ny is saving that money for when that crappy ole bridge falls down and they have to pay millions in lost frieght lost lives etc and then build a new bridge.
Mar 13, 2016 7:04am

Anthony Stephen
the damm toll is high for bridge which was deem unsafe by the federal dot but cant be closed because of the traffic volume
Mar 12, 2016 6:33pm

PJ Heinz
He aint the first one to think that one up. Charge a reasonable toll and no one will have to think like that.
Mar 11, 2016 7:40pm

PJ Heinz
However...if you're stupid enough to flip your license plate right in front of a port authority cop then you deserve to be prosecuted. What an idiot.
Mar 11, 2016 9:24pm

PJ Heinz
Exactly. Then people look at you like you're nuts when you add a $700+ surcharge to anything going north of the bridge. In some cases depending on which way you leave you could rack up $300 in just tolls easily.
Mar 12, 2016 7:10am

Jeffrey Hayes
The Port Authority of New York and New Jersey, has a budget bigger than 26 states, is selected by republicrat governors Cuomo & Christie, operates in secrecy and has absolutely no public accountability. … Cha ching $$$ … The 1st time I crossed that bridge in an 18 wheeler, it cost $12. Now it cost $126. Who’s scamming who? ... Lmao... George Washington would be ashamed to have his name associated with the thieves of New York & New Jersey. ... ;~$ …
Mar 12, 2016 6:47am

Chris Glaziner
That bridge is falling apart so you know that money goes into someone's pocket
Mar 11, 2016 7:42pm

Jon Schiller
I know this won't be a popular opinion. It wasn't popular the last time I posted it on another page. This guys a thief plain and simple he's a thief and he should be prosecuted. All this griping over how much the toll cost is BS. Nobody forces you to drive over that bridge. Unless of course your company driver and you're not paying the toll anyhow.
Mar 12, 2016 8:00am

Sue Domenico
I'm a company driver so my till is paid. It's not BS to bitch. It is a joke. When was the last time you drove thru there? All the money they make sure and hell is not spent on road work
Mar 12, 2016 4:50pm

Jon Schiller
Sue Domenico It's a cost of doing business in that area. The company you/I work for CHOOSE to do business in that area, therefore they must pay to play. Most loads going to or passing through that area carry a premium charge because of this added expense.
Mar 12, 2016 8:42pm

Joe Yablonski
The cops are actually being lenient on him. They should be charging him with commission of a felony while operating a CMV and taking his CDL
Mar 13, 2016 7:43am

Leonard Stevens
The last time I used the toll I had to pay the toll plus pay for my lumper. Then it was free to come the other way. Did a short haul to a warehouse in PA and had to pay to cross into PA from NJ. WHEN I NEEDED more money to do a roll off in PA dispatch said I was overdrawn
Mar 13, 2016 4:09pm

Ted Mckenney
Cost of doing business in that area??? It's a main route North and most are traveling through and for them to gouge the FUCK out of everyone is a fucking crime itself you moron. Since you think high fees and taxes are so great why don't you offer to pay up more of your earnings to the lousy authorities you shill for government. You must be on the government tit.
Mar 14, 2016 3:30pm

Jon Schiller
Ted Mckenney You make me laugh. Name calling and insults that's the best you got, go on down the road driver.
Mar 14, 2016 6:23pm

Nicholas Tomcheck
Must be the G W where a few bodies have been buried in concrete building it years ago.
Mar 12, 2016 6:21am

Chris Martin
126$ is legalized stealing. Trying to avoid paying it is illegal stealing. Just depends on which thieve's side you're on as to how you interpret it. I say F' NYC tolls.
Mar 14, 2016 10:05pm

David Stewart
Fuckup that state let all starve because they are thieves in there tolls for us doing are job but that never happen that state can go to hell far as I'm concern I'm never going there again and haven't for twenty five years
Mar 14, 2016 9:35am