A string of weather related chain reaction crashes have been occurring throughout the U.S. recently, but it was the stupidity of street racers that caused a fatal multi-vehicle crash in California over the weekend. Three people were killed including a UPS truck driver who was simply doing his job and two teenagers who were on their way home from Disneyland. While one of the street racers has been arrested, authorities are still searching for second culprit who fled the scene of the crash. 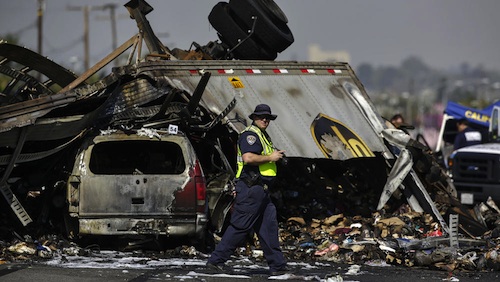 The incident occurred early Saturday morning just after midnight on the 5 freeway in the Commerce area of Los Angeles. According to the California Highway Patrol, a Dodge Challenger and a Dodge Charger were racing in the southbound lanes near the Washington Boulevard exit when one of them lost control and hit a UPS big-rig. The impact caused the truck driver to crash into the center divider and go airborne. The UPS truck then clipped the top of a northbound Nissan Sentra before landing on top of a Ford Explorer and then exploding into flames. Debris from the collision struck at least two other vehicles, officials said.

Tragically the UPS truck driver, Scott Treadway, died at the scene along with two teens who were riding in the back seat of the Nissan, identified as 19-year-old Michelle Littlefield and 18-year-old Brian Lewandowski. The driver of the Nissan, 21-year-old Tony Miramontes, survived the crash but has been in a coma since the incident. Brian Lewandowski was the son of a lieutenant in the Los Angeles County Sheriff's Department and his family shared their grief with the media. "Brian was an incredible young man and every parent's dream for a son. We are absolutely devastated by our loss," the family said. "Our hearts go out to the other victims and their families and our prayers are for the survivors' recovery. We are very thankful for the love and support of family and friends throughout this time." Teamster Local 396 also made a public statement about the fallen driver who had worked at UPS for over 30 years. "Scott Treadway was admired and loved by his friends and co-workers at UPS,” they said. 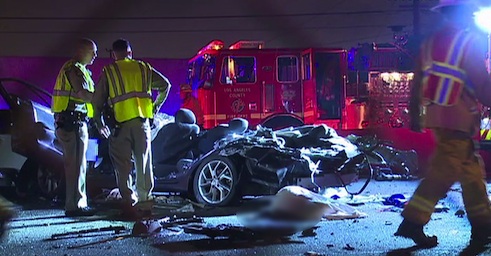 The driver of the Dodge Challenger, 35-year-old Dealio Lockhart, was arrested at the scene of the crash and even admitted to authorities that he had been street racing. He is facing three felony counts of vehicular manslaughter and authorities are continuing to search for the other driver of the dark colored Dodge Charger. "You got to do the right thing, turn yourself in," CHP Officer Charles Chu told the driver via the media. "There are plenty of families out there hurting because of this person's actions."

Jennifer Evans
And people say truck drivers are the killers, hmm I say NOT. RIP to the loved ones who loss their lives due to selfish individuals.
Feb 29, 2016 3:42pm

Brad Barbee
Sometime we, truckers, need to educate law makers on the need to make a driving class for cars. "Fundamentals of driving an automobile in an urban setting" Its 4wks long and needs a minimum of 90 or above. You then go and take the DMV driving test.
Feb 29, 2016 2:09pm

Brad Barbee
Hmmm, dumb ass? I was thinking people would learn a little more about driving around us and not causing a lot of the accidents that involve trucks. But I guess a narrow minded dip shit like you wouldn't understand the logic in it. Think about it the next time some fuckup pulls in front of you and slams on the brakes & you jack your trk during rush hour.
Feb 29, 2016 8:21pm

Alfred Black
David, a better way to phrase that question would have been "you really think that's going to solve the problem of dumb asses?" ;)
Mar 01, 2016 8:43am

Tony Lazzara
Brad there isn't enuf time or money to pay for a 4 week test , these were 2 assholes racing among hundreds of vehicles out their , I'm a retired trucker , I feel for the UPS driver he probably never saw it coming,
Mar 01, 2016 8:51am

Brad Barbee
Tony, I'm talking about a course that you go to a community college or private driving school to take just like a truck driving school, a real school, not a driver mill like Swift, CR England, Werner etc. The drivers have to pay for it. I live in the NW & people up here, especially in our corner state, are the most dangerous drivers. It's wet most of the time and people are fuckups. There are just to many people on the road anymore, especially the car to road capacity ratio, so it's time to train people to drive intelligently.
Mar 01, 2016 10:52am

Erick Painter
This guy was 35. He probably had driving experience. Nothing stops stupidity. I admit I used to race through Atlanta traffic at high speeds. Only time and experience changed my ways.
Mar 01, 2016 5:28pm

Alfred Black
Fucking hell man. Why is it so hard for people to take that shit to the track? Honestly though, I can't blame the guy who got away, if he doesn't turn himself in. He held his shit and didn't kill anyone. The person responsible is already in custody, from the sound of it. He shouldn't have been racing to begin with, but I'll be damned if I'd take the fall along with the guy who directly caused the wreck.
Mar 01, 2016 8:48am

Brian Porter
They both caused it .it's illegal to street race and if they were not racing then the one that lost it would not have lost it in the first place.
Mar 01, 2016 9:29am

Alfred Black
That's speculation at best. I don't recall seeing exactly what caused the loss of control, and I don't know anything about the man's personal driving habits. So for all I know, he might have been driving like a jackass, race or no.
Mar 01, 2016 9:32am

Alfred Black
Yes, I did. I also don't see where the cause of loss of control was stated. Bad maneuver? Blown tire? Busted tie rod? You see where I am going with this. You also know as well as I do that some people drive like irresponsible jackasses, regardless of anyone else's input.
Mar 01, 2016 6:45pm

Alfred Black
You'll have to forgive me for disagreeing. If the guy was only going to get traffic infractions, I'd be right there with you. However, you know as well as I do that they will want to implicate him in the manslaughter charges, even though he was (most likely) in no way directly responsible. The person who caused the deaths is already in custody. Now, if it turns out that the guy who got away did something stupid like spun the other guy out, that's something different, and then I agree with you entirely.
Mar 02, 2016 7:15am

Barbara Price
Alfred Black. The initial article I saw, stated that the street racer who crashed did a lane change to pass another vehicle, which also changed lanes, trying to avoid the racer. That started the chain reaction of events that led to this tragedy. The racer who got away is just as guilty as the one they caught. You can't race by yourself. If the second driver had not been willingly driving recklessly by racing, the first guy would've had no one to race.
Mar 02, 2016 9:07am

Alfred Black
Your last statement is true, however, you again make the assumption that he wouldn't have been driving like a jackass without the race factor involved. Do you assume that everyone who passes you on the interstate, running 130 is racing someone? Again, we're not talking traffic infractions and fines. He'd have to be an idiot to turn himself in for something he did not directly cause.
Mar 02, 2016 9:20am

Tiny Mcfee
Both street racers are guilty both need to be held accountable. If it was your loved one that died maybe u would see things different. Just because he got away doesn't make him innocent.
Mar 02, 2016 1:18pm

Alfred Black
No, unlike many, I do not let my emotions get in the way of how I feel that prosecution should work. Both are guilty of racing, yes. Only one is guilty of causing an accident that killed several people.
Mar 02, 2016 2:02pm

Ed Halterman
While I agree, they keep closing tracks and replacing them with empty strip malls. The closest public tracks are Fontana and Bakersfield. Irwindale is going bye bye and Pomona doesn't have track days for the public.
Mar 02, 2016 12:10pm

Rebecca Moad
The four who lost their life Rip and the other who got burn pray for recovery
Mar 02, 2016 6:43am

Kevin Richardson
Ignorance at it's best and yet law enforcement agencies won't even crack down. Want to race go on the damn track!
Feb 29, 2016 10:31pm

Ed Halterman
2nd time in about a week where a stupid car driver cost a trucker his life. Last week it was up on hwy 126 near Santa Clarita where a car pulled out in front of a big truck, got hit, then went head on with an oncoming set of doubles.
Mar 02, 2016 12:14pm

Barbara Price
The charges against the street racer in custody have been upraded from vehicular manslaughter to murder. Now let's find the other guy. http://cdllife.com/2016/top-trucking-news/featured/charge-upgraded-to-murder-for-street-racer-in-crash-that-killed-trucker/
Mar 02, 2016 9:14am

Larry Killian
Rest in peace Ups driver cars all of the time in a hurry to get in front of the big truck you're afraid we are going to hold them up in actuality they're actually holding us up cuz a good 50 feet decide to make a left turn then we gotta stop
Mar 01, 2016 5:01pm

Jeanne Meier
Horrible crash....what a waste of lives! So saddened by this needless tragedy!! Prosecute to the fullest extent!!!
Mar 02, 2016 5:06pm

Erick Painter
Same ad was under the guy in forest park ha who was hung on a curb and the police shot his wheels out. It was his mug shot.
Mar 01, 2016 5:30pm