A man was killed and at least three people were injured after a crawler crane collapsed in Manhattan Friday morning. The crane is owned by Bay Crane and was being operated by Galasso Trucking and Rigging. They were in the process of lowering and securing the crane because of high winds in the area, when it suddenly plunged to the ground. (Watch video here.) 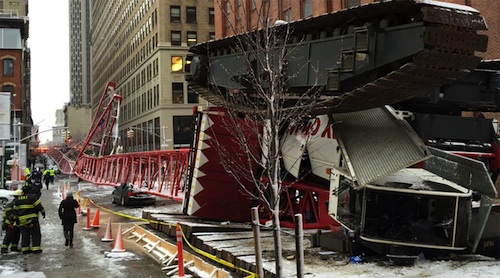 The boom of the crane was about 565 feet, reaching over 15 stories high, with a 330-ton capacity. An extension had been added the day before. The crane was being used for the difficult job of lifting heavy air conditioner units into a building on Worth Street in the Tribeca area. On Friday morning, the operator had been instructed to lower and secure the crane because of winds gusts topping 20 mph. Then at about 8:30 a.m., the crane simply collapsed during the process, smashing into several buildings on its way down and landing on cars parked along Worth Street. Tragically, a man had been sitting in his car and was killed when the crane collapsed. Two other people are in serious condition and another suffered minor injuries from falling debris. 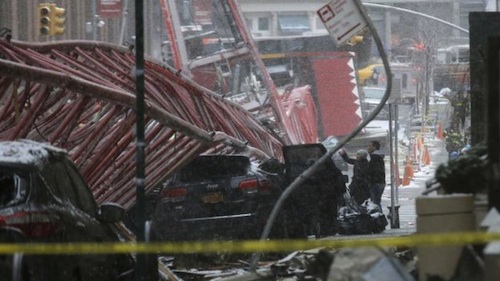 Fortunately, the crash site was across the street from the NYPD Sergeant's Benevolent Association and members were immediately able to respond. Vice President Bob Ganley said he looked out the window and saw the crane as it was crashing down. Others in the building said that the impact felt like an earthquake. Several officers jumped into action and ran outside to assist people who were hurt. They were able to help a person who had been trapped in their car, but could only cover the body of the man who had already perished in his crushed vehicle. "It was a scene. It was surreal. It was like a war zone when it first happened," Ganley said. More than 100 firefighters quickly accumulated in the area, along with dozens of EMS workers and police.

According to a spokesperson from Department of Buildings, officials had cleared the site a day before the collapse. “Our department of buildings personnel had been on the site yesterday to approve the next steps in the work on that building. They had inspected the crane yesterday morning at 6:20 a.m. and reviewed the work that was being done and had approved it." However, Bob Ganley wasn’t so sure about the crane’s safety. He said he had a conversation with someone outside his building on Thursday about how uncomfortable they were with the height of the crane's boom. "I told him, 'That doesn't look good, does it?'" Ganley said.

As the investigation is underway to determine the exact cause of the collapse, Police have set up barricades around the scene and gas mains have been shut down in the area as well. Officials say the crane crashed down so hard that it disrupted underground infrastructure. "It will certainly take several days, certainly no earlier than Monday, possibly longer, before we can get things back to normal in these immediate blocks," said mayor De Blasio.

Tommy Hamill
Not sure how corporate greed caused this crane to fall. Probably should have just left it alone and rode the high winds out. Operator and crew error was probably to blame more than wind.
Feb 06, 2016 1:14pm

Dean Olsowsky
Most likely people in charge said let's go and get it done and disregarded the winds.
Feb 07, 2016 6:47pm