The Midwest has been hit with another major snowstorm, delaying drivers in southern Minnesota, Iowa, Nebraska, Colorado, Michigan and South Dakota. 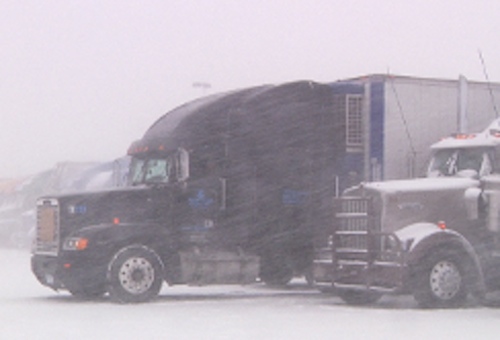 Even before portions of the interstates began to close down on Tuesday, truck drivers and motorists around Sioux Falls played it safe and stayed off the roads finding refuge wherever space allowed. By Tuesday night, a truck stop near the I-29 and I-90 interchange had big rigs packed like sardines. Scott VanBrunt was among the many truck drivers holed up at the Flying J and as someone who has been driving for more than a decade he knows the risks of trying the road in blizzard like conditions. "The thing weighs up to 80,000 pounds at times and it's hard to stop and when conditions get like this it's even harder,” he said. "Then factor in 45 mile per hour winds. If you're not careful a gust of wind can push you right off into the ditch."  There were many truck drivers who shared VanBrunt’s sense of playing it safe and stayed off the roads, including Thomas Marcy who was on his way to Kansas City. "With the snow blowing and the wind and with not a lot of weight in my trailer, I don't really want to drive to far because it can blow you sideways," said Marcy. “I just figured if I got down further south that the roads would be worse and everybody would be piled into the truck stop and not find places to park."

The storm continued to force road closures all the way through central and northeast Nebraska and on Wednesday, officials temporarily closed a major stretch of Interstate 80 from Lincoln to North Platte and then North Platte to Ogallala, meaning that drivers were forced off nearly 275 miles of the state's major east-west highway. The storm dumped 10 to 18 inches of snow along the Interstate and the whiteout conditions made it even worse, preventing crews from clearing the roads.“It was impossible for people to see, so it was not safe for anyone to be out on the road, including our folks,” said Jeni Lautenschlager of the Department of Roads. A number of vehicles also got stuck and were left along the Interstate as well, including hundreds of semis lined up along I-80 eastbound between exit 177 and 179, and others along an access road and U.S. Highway 83. At approximately 2 p.m. central time, the conditions finally let up enough to re-open the roads.

Stephen Bour
What I find amusing is drivers in Wyoming who are surprised by winter weather. Even the locals seem befuddled when it's cold,windy,and snowing. Road shutdowns? Routine.
Feb 05, 2016 6:22pm

Melanie Rachelle Dunahue
Yep I was there it was bad I was in North Platt ne but it still not cleaned up in wy I 80 I 25 still closing due to this storm we are setting in Cheyenne right now can't go no were and don't know when we be able two we were in ne for 3 days before we could leave and snow was half way up the front our big rig when they did open I 80 tuesday night I went 55 miles in 31/2 hr the roads were not say till morning they shouldn't been opened seen 3 rig go over just going two fast I watched a man lose his life to this storm
Feb 04, 2016 8:55pm

Charles Miller Jr.
The times you spend shut down doesnt compare to the alternative outcome. If you have never been there you would never know the risks and pains involved. God bless and be with you, fellow trucker.
Feb 05, 2016 4:00pm

Jim Rigney
Be safe brother's and sister's. I wonder how those elogs are working out for everbody!
Feb 04, 2016 8:49am

Melanie Rachelle Dunahue
Some had no choice I was in SD then a load to Denver then another stop to salt lake city trust me this the first time all year I have been stuck like this let me refrain this this is the first time in my driveing career I have been shut down for more the 12 hr and I planed I had food water and keep my fuel at full never letting it get below 1/2 tank but when u get put up here ur stuck
Feb 04, 2016 8:58pm

Elizabeth Griswold
Mean while in Alaska, the weather is warm and dry. For this time of year anyway.
Feb 04, 2016 10:45pm