Winter Storm Jonas turned out to be all it was warned to be, bringing ice, snow, flooding and high winds that pretty much shut down the East Coast over the weekend. At least 31 people are reported dead as a result of the storm, hundreds of crashes occurred and thousands of flights were cancelled. Not to mention that Jonas left hundreds of truck drivers and motorists stranded throughout the region, many for up to 24 hours. 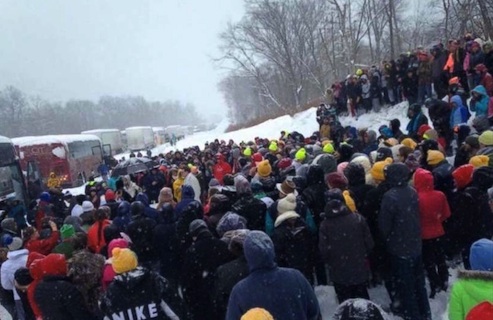 On Saturday, more than 500 vehicles were left on a section of the Pennsylvania Turnpike where many tractor-trailers had reportedly jackknifed and blocked traffic near a tunnel. Truck drivers and motorists were also forced to wait long hours along the road without food, drink or bathroom access until the state police and National Guard were able to provide relief. “I've been driving a truck since 1998 and I have never been stuck for more than four or five hours before,” said truck driver, Mark Lusk. “This is crazy. By the time they get everyone moving, I assume it will be 24 hours for me sitting in one spot.” Fortunately people were able to help each other out and make the best of the situation, even holding a make-shift Sunday morning mass on the roadside. Nearly 200 tractor-trailers were also stranded along I-77 in West Virginia on Saturday.

Although roads are re-opening and life is slowly resuming on Monday, freight transportation and railways are still crippled in the storm’s aftermath. Ports of New York and New Jersey’s four largest container terminals are remaining closed until Tuesday and delayed travel is not only slowing freight pickups and deliveries in the East, but its affecting supply chains throughout all of North America. CSX Transportation said their biggest challenges were along railway routes stretching from the Great Lakes to the Mid-Atlantic and Southeast. Trains were held because of the severe weather conditions and because road conditions simply prevented many crew members from getting to work. “Customers should expect delays up to 48 hours on freight moving through these impacted areas,” a CSX spokesperson said. 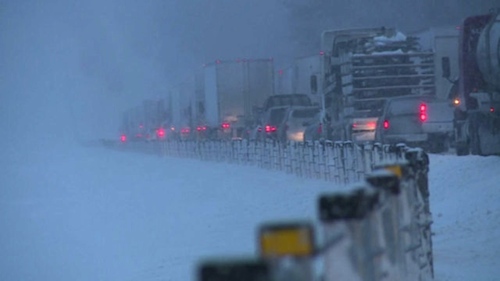 Trucking companies in the Northeast are also still facing serious delays. Although the storm has subsided and road conditions are slowly improving, many road restrictions are still in place and parking lots and freight yards are still filled with snow. Trucks simply have nowhere to go. “Due to road restrictions and the ongoing snow removal efforts of businesses throughout the region, there is currently no delivery service in Maryland, northern Virginia, eastern Pennsylvania, New Jersey and metro New York,” said trucking company, A. Duie Pyle. Other carriers across the region are facing the same problems and warning customers that deliveries will be limited and delayed until road conditions improve.

Timothy Begle
"Deadly Storm Strands Drivers, Delays Shipping" Thank goodness we have the news media to tell us that. Otherwise, we would have thought everything was normal in spite of all the trucks who were stuck in the snow for days. [snicker]
Jan 26, 2016 5:59am

Curtis Littrell
Made it from laredo to crossville,tn with no problem and now headed to detroit..whats the problem...hahahaha
Jan 26, 2016 6:26am

James Fish
I made it to Hebron, OH before sitting for a couple days. Made it through yesterday
Jan 26, 2016 6:17am

Chris West
I'm just thankful not to have had a crane appointment those can be expensive
Jan 26, 2016 1:29pm