When they give a weather system its own name, you know it’s going to be a bad one and so far Winter Storm "Jonas” is living up to its name. Kicking off on Friday as a widespread mix of snow, freezing rain and sleet across the South East from Arkansas to Tennessee, Kentucky and North Carolina, Jonas has already killed 4 people, caused thousands of power outages and declared states of emergency across the region. Now, the blizzard is making its way up the US east coast and more than 50 million people are being warned of its potentially paralyzing effects. “This system has the potential of being an extremely dangerous storm that could affect over 50 million people,“ said National Weather Service, director Louis Uccellini. “We are talking about a potentially paralyzing storm that is already setting up.” 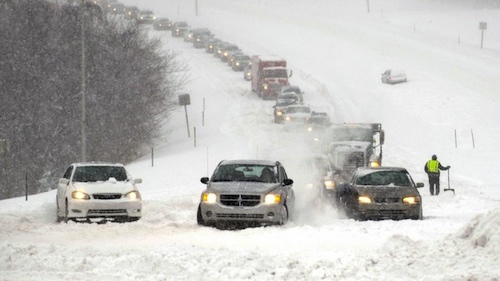 The system has already proven to not only bring paralyzing conditions but downright deadly roads with two drivers killed in North Carolina, one in Tennessee and a pedestrian dead in Maryland. Already, states of emergency have been declared in Maryland, North Carolina, Georgia, Pennsylvania, Virginia and the District of Columbia, and widespread blizzard watches remain in effect from Arkansas through Tennessee and Kentucky and as far north as New York. Washington DC is expected to be hit with the heaviest snowfall (24ins) and the capital’s entire transportation system is going to be closed all weekend. Not to mention that flights are already being cancelled and road travel is already coming to a halt in the effected regions. 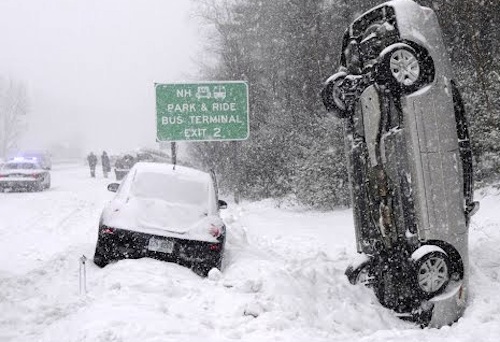 Truck driver Mike Edmonds has been holed up at a Kentucky truck stop all day Friday, unable to do anything but watch as the snow piles up around them. He says people are even having trouble getting out of the parking lot because the pavement is so slick that vehicles simply spin out trying to get back on Interstate 75. Edmonds adds that he’s not even going to bother trying to get back on the road until Saturday because even if you do manage to get out of the truck stop right now, people are just sitting in traffic because of all the accidents piling up in both directions. Edmunds says that so far he's spent his day, "Talking with the other drivers about how screwed up the weather is."

Weather Prediction Center meteorologist, Paul Kocin says that he hopes with the storm hitting over the weekend and people listening to the advance warnings, it will help reduce the number of deaths.

Christopher Wilkerson
This is what I had to drive through today to get home in ky
Jan 22, 2016 4:49pm

Kevin Richardson
Where I deliver in Kentucky closed today ahead of schedule.
Jan 22, 2016 6:51pm

Larry Peterson
Storms like that. Should ban non commercial vehicles off the interstates .
Jan 22, 2016 9:22pm

Michael Meier
Interstates are made for the free transpotation of freight within the lower 48. Not for cars, but for trucks
Jan 22, 2016 10:49pm

Mel Trout
Michael Meier Story I heard, which I can't prove, so it's a rumor. Actually set up for military in case of a war in our country. To move quickly around the country. Which is more or less what you said. ;)
Jan 23, 2016 1:34am

Samuel Lee
Eisenhower interstate highway system...occasionally you see the signs, unfortunately the average person has no reminders, or even realizes what a mile marker is for.
Jan 23, 2016 9:00am

Robert A. Luthart
In NYS... it's completely backwards... they ban 18 wheelers first. I can certainly understand empty trailers... but loaded with 35k plus should be allowed over cars any day of the week!
Jan 24, 2016 8:56am

Christopher W. Bryant
If you have to stay out An extra day your company should be required by law to pay you for it.
Jan 23, 2016 4:34pm