The shortage of parking for truck drivers has been an ongoing and escalating problem across the U.S. but this time it caused a heated argument that nearly cost a man his life. The incident occurred late Saturday evening at a Flying J station in Utah, where a fight over a parking spot led to a near fatal stabbing. As the victim recovers in the hospital, police are now searching for two suspects that fled the scene in a white semi hauling a flat bed of lumber. 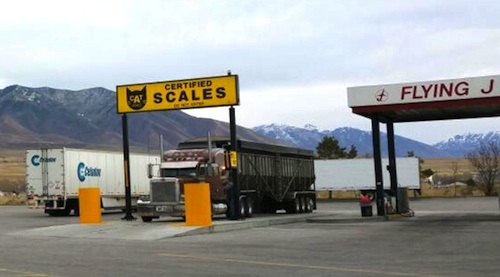 At about 11:20 p.m. on Saturday night, two semi-trucks arrived at a Flying J in Lake Point, Utah at around the same time and were apparently going for the same parking spot. According to Lt. Travis Scharmann of the Tooele County Sheriff's Office, the two drivers got out of their trucks and immediately got into a heated argument that led to a physical altercation. Each truck driver also had someone riding along with them and at some point during the altercation the two passengers got out of the trucks and into the middle of scuffle. The situation suddenly escalated into something far worse when one passenger pulled out a knife and stabbed the other passenger. Obviously realizing his grave mistake, the suspect and the driver he was accompanying quickly fled the scene leaving the victim with a serious stab wound to the stomach. The man had to be airlifted by helicopter to the University of Utah. Although he is expected to recover, the victim is not cooperating with authorities in tracking down the man who stabbed him.

Nevertheless, police have continued to search for the two men and have used gas pump records and surveillance footage to get more details about the suspects and how the situation went down. "There's a few things not making sense to us, but we're still looking into it with the victim not being too cooperative," said Lt. Scharmann. He also adds that the truck driver with the victim (who is also his brother) described the suspect and his driver as white and possibly foreign nationals from Russia by the way they spoke broken English. Police say the truck is a white semi with a flatbed trailer hauling two-by-four lumber that wasn't covered. Investigators have put word out to surrounding law enforcement agencies and are also seeking the public's help in locating the vehicle. Anyone with information about the stabbing or the truck can call Tooele County Sheriff’s Office at 435-882-5600.

Ricky Sweeney is a veteran truck driver who stopped at the Flying J on Sunday while police continued their investigation. "It's distressing. Stress probably has a lot to do with it, but you have a lot of irresponsible people," Sweeney said.

Mike Eaton
Ok. So two Russians driving a white Volvo pulling a flatbed loaded with lumber....thanks for narrowing that down.
Jan 11, 2016 6:46pm

Glen Murphy
That describes half of all the people running I-80 the east European expressway
Jan 13, 2016 2:43pm

Darryk Cromwell
Thank you..... It is a shame that violence is the response to some other driver being rude and snatching the spot. When i was on the road. I drove at night, the roads were damn near clear and i actually seen more wild life then cars. And when i pulled into the Truck stop no matter what time zone i was in there was always a "Good" spot open...Always. I remember when i was in Mountain Gate Idaho at the Flying J... Dumb ass Driver pulled in half way when i was backing in and then blew his horn, so i just moved across the street behind the best western hotel, Big ass dirt lot with some lighting and it is quite... so after this incident i never parked at Flying J again for the night. I always pulled across the street....shame I hope that driver is ok and can keep moving on. Hope he was empty or still has a few days out to deliver.
Jan 11, 2016 2:10pm

Britton Love
Can't carry weapons because I run Canada all the time.. I do have a claw hammer along side my seat that I would have no problem burying in someone's skull, if I felt threatened!
Jan 11, 2016 4:31pm

Bill Fields
It's time some of you low life and low class want to be drivers to be professional. Back in my day, if you tried that shit, you just got a ass whipping that you will regret forever
Jan 11, 2016 2:00pm

John MD Kessner
Trucking industry has gone to crap everywhere not worth it any more. And best yet the ATA thinks they run everything .
Jan 12, 2016 6:26am

Robert Boiteau
Drivers nowadays are willing to kill to be closest to the door to the buffet
Jan 11, 2016 5:10pm

Braden Edwards
Why is this anything new back in the 80s going to truck stops like the Detroiter could get you knifed in a heart beat
Jan 14, 2016 6:45am

Mike Wyatt
Something fishy when a truck driver can't tell you what kind of truck it is only white
Jan 13, 2016 5:51pm

Kenneth Long
Nothing fishy about that. A lot of drivers don't know what kind of engine they have. Unless you're real truck enthusiasts most trucks look the same if we from the same colors because lot of them are leased trucks. Society teaches you not to pay attention to anything someone's going to do it for you. So it is easy for a newbie that could be any age did not really know what kind of truck it was especially in a excited situation.
Jan 14, 2016 12:50pm

William Vinet
ya see there a lot of women now driving good looking ones to just like women cops now before was all guy looking girls now there a lot of fine ones to
Jan 11, 2016 12:46pm

Chris Council
One of the many reasons I went local just isn't worth the headaches anymore
Jan 13, 2016 1:41pm

Jason King
Most regular Americans can't speak English. So no big deal there. I'd love to learn some of those European languages though.
Jan 12, 2016 8:51am

Barbara Price
There was an article posted that seem to indicate that, but a closer look showed that driver arrested in St George, Utah was responsible for a different assault. I saw a post about it, but the date on the arrest story was October 2015, but this assault in Tooele took place in January 2016. If you have a story that updates this to show there was an arrest, please post a link to it, because I am interested in seeing how this plays out, as are others, I'm sure.
Jan 11, 2016 1:12pm

James R Maxwell
And so many drivers were defending the douche bag that was being a dick to SNL driver. Maybe this guy was being a DH and met the wrong drivers. Hopefully not, but you never know out here.
Jan 11, 2016 1:40pm