Drought stricken California is finally getting drenched with a year’s worth of rain in just a matter of days and now the entire state is threatened with flooding, mud slides, hail and high winds. 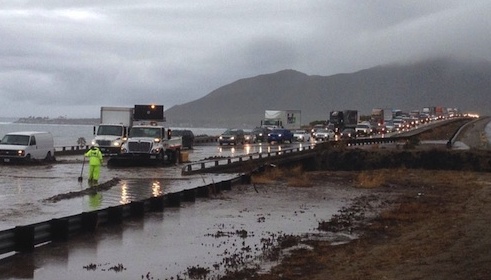 The second in a series of storms hit Tuesday, bringing enough rain to Los Angeles to beat its 1979 record by a tenth of an inch and drenched the entire Bay area all the way down to Orange County and San Diego - causing floods, mudslides and mayhem on the roads. The California Highway Patrol estimated there were already nearly 24 weather-related crashes in the region by 7 a.m. and by afternoon several accidents had tied up the 10 freeway including a truck carrying empty crates that flipped over and drop its entire load on the wet road. Another semi-truck crashed on the 210 freeway in the Foothills region and the Los Angeles River rose so high that drivers were forced to abandon their flooded vehicles. 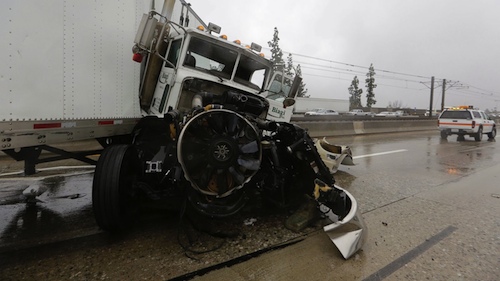 Flash flooding and mudslides along the Ventura County coast also forced partial closure of the 101 Freeway as floodwater and mud flowed down hillsides stripped by recent brush fires. A tornado in Los Angeles County also wreaked havoc causing severe damage to at least eight commercial buildings, caused power outages and blew out windows and roofs. Fortunately, there have no serious injuries reported in any of the incidents caused by Tuesday's weather system. 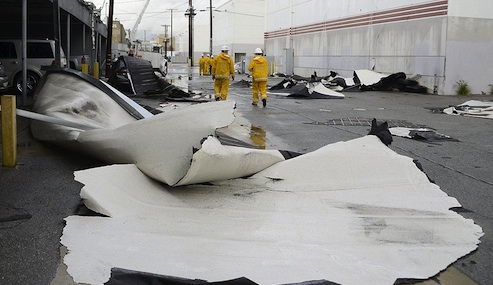 But now, another El Niño storm is expected to bring even more severe conditions to California on Wednesday. According to the National Weather Service, rain is falling at a rate of about one inch per hour and will continue to bring another six inches by Friday. Wednesday's system is also expected to see colder temperatures, stronger winds and worse flooding.  Already, lanes on both sides of the 5 Freeway near Sheldon Street and Lankershim Boulevard in the Los Angeles-Sun Valley area have been closed because of flooding and traffic is backed up for miles. Motorists in the mountain areas have also been warned about blizzard like driving conditions that will potentially bring several inches of snow and wind gusts up to 60 mph. However, truck drivers such as Chris Ifo says it’s not stopping them from doing their job. "We're pretty much not happy campers doing this, but we've got to do it just to get the freight on the other side," Ifo said. 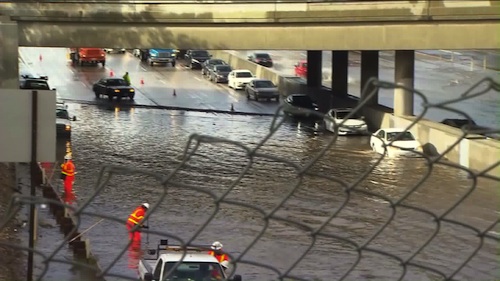 Darren Nordquist
California can have that weather it don't bother me as they hate trucks by the way all I can say is goodbye California
Jan 07, 2016 2:15pm

Steve Balch
There sure are some ignorant people posting in this topic. Be thankful California is getting rain, maybe now the price of your produce won't sky rocket seeing how California produces about 90% of the produce in the United States.
Jan 08, 2016 12:42am

Brett Ruge
Maybe if those idiots ( liberals in office ) were concerned about the farmers instead of tiny fish the farmers could of watered their crops long time ago instead of going broke
Jan 08, 2016 5:55am

Brett Ruge
Umm no shit they didn't drink the water but the farmers couldn't use the water available because of the fish ,get it
Jan 08, 2016 1:26pm

Tim Campbell
Good now they can enjoy it also, oh they were not prepared you say , tough shit fuckers That state of yours needs to Either float off or sink , good luck
Jan 07, 2016 5:14am

Hudson Rager
Awesome those cock breath faggots deserve what they get have fun in the ocean
Jan 07, 2016 11:50am